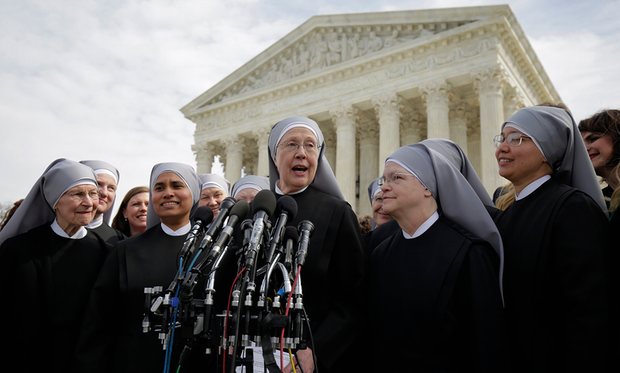 The second case to thrust the supreme court into a showdown over religious beliefs, contraception and Barack Obama’s signature healthcare law unfolded on Wednesday, in a tense 90 minutes that saw clashes along familiar ideological lines.

The case, Zubik v Burwell, pitted the government against 29 faith-based not-for-profit organizations who say its rules for groups with religious objections to covering female employees’ contraception are morally compromising.

But the two sides have cast the trial as something greater: a high-stakes fight for women’s equality, or a profound battle over basic protections for religious freedom.

The justices still number eight after the death of Antonin Scalia. In his absence, the four conservatives who remain lobbed a series of skeptical questions at the government.

The case marks the fourth time the high court has heard a challenge to the Affordable Care Act, President Obama’s signature legislative achievement.

And it is the second challenge to take aim at the contraceptive mandate – a requirement that employers offering healthcare plans cover most types of birth control for their female workers. Not two years ago, in Burwell v Hobby Lobby, a deeply divided court ruled that for-profit companies which are “closely held”could claim religious objections in order to opt out of the mandate.

But the groups appearing before the court on Wednesday already have the ability to opt out of providing contraception coverage – thanks to a health department accommodation for religious not-for-profit organizations announced more than three years ago.

Wednesday’s lawsuit brings the claim that their beliefs are violated by the very accommodation that exempts them from the mandate: a two-page government form.

The form is what notifies the government that a not-for-profit organization is refusing to provide contraceptive coverage on its own. To the not-for-profit organizations, the mere act signing of the form – which alerts an insurance plan administrator of the need to make separate arrangements for coverage – is tantamount to continuing to provide the coverage themselves. The groups’ opposition to covering female contraceptives is based on a belief, which is on dubious scientific grounds, that IUDs and morning-after drugs cause abortions.

“Before trivializing petitioners’ objections,” the brief continues, “it should be remembered that ‘Thomas More went to the scaffold rather than sign a little paper for the King’.”

But the government says that thousands of women’s healthcare would be at risk if the not-for-profit organizations didn’t have to notify the government that they no longer covered contraceptives.

The 29 groups represented on Wednesday include Bishop David Zubik of Pittsburgh, four religious colleges, the Catholic archdiocese of Washington DC, and the Little Sisters of the Poor, a group of nuns which controls a string of retirement homes. Together, they employ 5,300 full-time workers and insure more than 12,000 college students.