The Holy Quran as the Miracle of the Holy Prophet 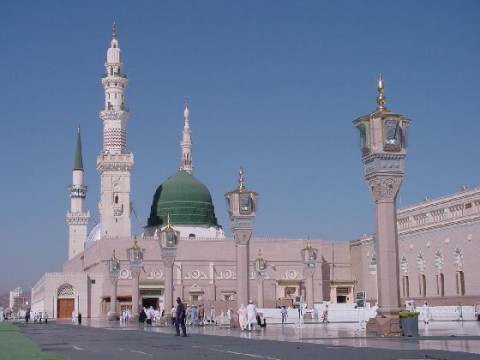 Mosque of Medina: First built in the first year after Hijra

This is a short article to introduce the subject to fellow Christians. The  Holy Quran says about them: And thou shalt assuredly find those who say, ‘We are  Christians,’ to be the nearest of them in love to the believers. That is because  amongst them are savants and monks and because they are not proud.  (Al  Quran 5:83)

“Illiterate himself, scarcely able to read or write, he was yet the author of a book which is a poem, a code of laws, a Book of Common Prayer, and a Bible in one, and is reverenced to this day by a sixth of the whole human race as a miracle of purity of style, of wisdom, and of truth. It was the one miracle claimed by Mohammed—his ‘standing miracle’ he called it; and a miracle indeed it is.”[1] Reginald Bosworth Smith

In the 21st century residents of a European country, namely the Swiss voters have backed a ban on building any more mosques with minarets in their country. The Holy Quran, revealed in the desert of Arabia in the seventh century stated that the purpose of defensive warfare is to preserve the sanctity of cloisters, churches, synagogues and mosques. The Quran named the place of worship of the Muslims as the last on this sacred list.[2] Is the Quran a miracle or not?

Religious tolerance is not the only teaching wherein the Holy Quran excels all other secular books or religious scriptures. Since 1982 half a million people have died in USA alone in alcohol related traffic accidents, to name only one problem from alcohol.[3] The Holy Quran emphatically forbade alcohol, saving the believers from this mother of many evils. Is it a miracle or not?

Sir Godfrey Higgins wrote, “By the law of Mohamed all games of chance were expressly prohibited: the beneficial tendency of this law surely no one will deny. He is refused all merit for his morality, because it is said that he only copied it from the Bible. I have not observed the prohibition of this vice either in the decalogue or the gospels.”[4] Fifteen million people now display some sign of gambling addiction in USA, and inflict themselves and the society with pain. The Holy Quran nipped the evil in the bud. Is it a miracle or not?

“Mohamedism  is reproached with copying its morality from the gospel;”  Sir Godfrey  Higgins wrote in the defense of the Prophet, “a philosopher, perhaps, may  suspect that when the prophet was availing himself of the excellent moral  precepts of Christianism, he had sense, not only to take the good, but to leave  the evil; to adopt the morality, but to avoid the hired priesthood which, in his  day, had filled the world with bloodshed and misery, and was rapidly reducing it  to a state of the most debasing ignorance.[5][6] Fourteen hundred years later the Catholic  Church is following suit in their negotiation with the Anglican Church.[7][8]  Every time we contrast the Holy Quran with the  Bible, the Quran comes out ahead.  Is it a miracle or not?

The Quran was revealed in a seventh century  tribal society yet it has 800 verses stressing the study of nature.  Is it  a miracle or not? It anticipates both the Big Bang and the fact that all living  things require and contain water, in the same verse, “Do not the disbelievers  see that the heavens and the earth were a closed-up mass, then We opened them  out? And We made from water every living thing. Will they not then  believe?”[9] Is  it a miracle or not? Read on and in the  words of Francis Bacon, “Read not to contradict … but to weigh  and consider.”

The Quran was revealed in a society where very few people could read or write, yet its text has been preserved for more than 14 centuries. Such a claim cannot be made for the Bible. These facts are examined in a companion article, Compilation of the Holy Qur’an into a text. Is it a miracle or not? 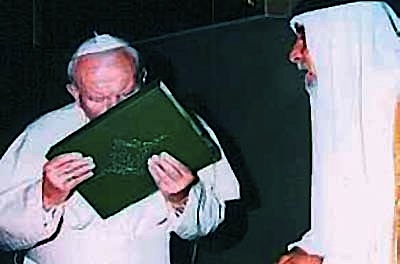 Pope John Paul kissing a copy of the Holy Quran

The Quran issued a historic challenge not only to the contemporaries of the Prophet but also to men in all ages; “Were all of mankind to come together and wish to produce the like of the Qur’an, they would never succeed, however much they aided each other.”[10] The challenge remains unmet 14 centuries after its issuance. People can come out with negativity and start criticizing the Holy Quran on one or the other ground. But that is their wishful thinking and paranoia and not any real scholarship. The fact and the ground reality remains that this challenge of the Holy Quran has been out there and no writer has tried to take up the challenge, in a manner, that will stand the test of time. A book attributed to an untaught person and yet no one dares take up the challenge! Professor Laura Vaglieri, who served as professor of Arabic and Islamic Culture at the Naples Eastern University, wrote: “Although the opponents of Islam were invited by Muhammad to compose a book similar to his own, or, at least, a chapter (‘And if you are in doubt as to what We have sent down to Our servant, then produce a chapter like it;’), and although those who had the ability to express themselves with great eloquence were plentiful among the Arabs, yet nobody was able to produce anything which could stand comparison with the Quran; they fought the Prophet with arms but failed to match the excellence of the Quran.” [11] Is it a miracle or not?

Let me here quote from the experience of German philosopher Johann Wolfgang von Goethe. He said, “As often as we approach the Quran, it always proves repulsive anew; gradually, however, it attracts, it astonishes, and, in the end forces admiration.”[12][13] Professor Laura Vaccia Vaglieri explains: “The miracle of Islam par excellence is the Quran, through which a constant and unbroken tradition transmits to us news of an absolute certainty. This is a book which cannot be imitated. Each of its expressions is a comprehensive one, and yet it is of proper size, neither too long nor too short. Its style is original. There is no model for this style in Arab literature of the times, preceding it. The effect which it produces on the human soul is obtained without any adventitious aid through its own inherent excellences. The verses are equally eloquent all through the text, even when they deal with topics, such as commandments and prohibitions, which must necessarily affect its tone. Stories of Prophets, descriptions of the beginning and the end of the world, enumerations and expositions of the divine attributes are repeated but repeated in a way which is so impressive that they do not weaken the effect. The text proceeds from one topic to another without losing its power. Depth and sweetness, qualities which generally do not go together, are found together here, where each rhetoric figure finds a perfect application. How could this marvelous book be the work of Muhammad, an illiterate Arab who in all his life composed only two or three verses, none of which reveals the least poetic quality?” [14] Is it a miracle or not?

Bernard Shaw  who was awarded the Nobel Prize for Literature in 1925, said, “I have always  held the religion of Muhammad in highest esteem because of its wonderful  vitality. It is the only religion which appears to me to possess that  assimilating capability to the changing phases of existence which can make it  appeal to every age. I have prophesied about the faith of Muhammad, that it  would be acceptable to the Europe of tomorrow as it is beginning to be  acceptable to the Europe of today.”[15] Is  it a miracle or not?

Laura Vaccia  Vaglieri, professor at the University of Naples, has further to say: “For the book, besides its perfection in form and method, proved itself beyond  irritation even in its substance. In it, among other things, we read a forecast  of future events, and a description of events which had taken place centuries  before but were generally ignored. There are frequent references to the laws of  nature, to various sciences, both religious and secular. We find there vast  stores of knowledge which are beyond the capacity of the most intelligent of  men, the greatest of philosophers and the ablest of politicians. For all these  reasons the Quran could not be the work of an uneducated man, who had spent all  his life in the midst of an unrefined society far away from men of learning and  religion, a man who always insisted that he was but a man just like any others,  and, as such, unable to perform miracles unless he had the help of Almighty God.  The Quran could have its source only in Him Whose knowledge comprehends  everything in heaven and earth.”[16] Is  it a miracle or not?

I invite the  Christian readers in the words of Reginald Bosworth Smith, “To discriminate  between the accidental and the essential, the transitory and the eternal; above  all, constantly to turn the mirror in upon oneself, and to try to make sure that  one is complying with that great principle of Christianity of judging and of  treating others as we should wish ourselves to be judged and treated;” that is  the recipe to judge affairs in a fair and unbiased manner.[17]  The Holy Quran says, regarding limitless  knowledge and insights contained in the scripture, “Say,  ‘If every ocean becomes ink for the words of my Lord, surely, the ocean would be  exhausted before the words of my Lord were exhausted, even though We brought the  like thereof as further help.’”

The messiah of this age, Mirza Ghulam Ahmad  Qadiani, the founder of Ahmadiyya Muslim Community explains:

The Holy Qur’an is not matchless merely on account of the beauty of its  composition, but is matchless on account of all its excellences which it claims  to comprise and that is the truth, for whatever proceeds from God Almighty is  not unique only on account of one quality but on account of every one of its  qualities. Those who do not accept the Holy Qur’an as comprehensive of unlimited  eternal truths and insights, do not value the Qur’an as it should be valued. A  necessary sign for the recognition of the holy and true Word of God is that it  should be unique in all its qualities, for we observe that whatever proceeds  from God Almighty is unique and matchless even if it is only a grain of barley,  and human powers cannot match it. Being matchless means being unlimited, that is  to say, a thing can be matchless only when its wonders and qualities are  unlimited and have no end.  As we have just stated, this characteristic is  found in everything created by God Almighty. For instance, if the wonders of a  leaf of a tree are investigated for a thousand years, that period would come to  an end, but the wonders of the leaf will not come to an end. That which has come  into being through unlimited power, must comprise unlimited wonders and  qualities.[19]

Is it a miracle or not?  Space does not allow me to  continue.

The Holy Quran as the Miracle of the Holy Prophethttp://t.co/cS0D7KOL1L pic.twitter.com/SHtdlhP5Mp