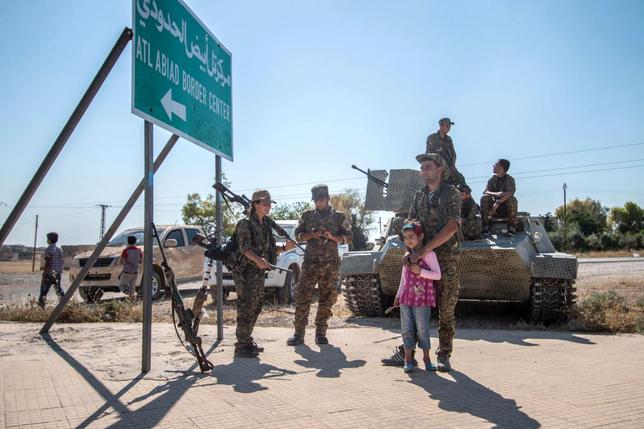 Kurdish-led forces advanced on Monday deep into territory in Syria held by Islamic State, showing new momentum after they unexpectedly swiftly seized a border crossing from the jihadists last week.

The rapid advance into Raqqa province has defied expectations of a protracted battle between the Kurdish YPG group and Islamic State fighters, who waged a four-month battle for the border town of Kobani, where the Kurds finally defeated the jihadists in January.

Raqqa is the main seat of power in Syria for Islamic State, the group also known as ISIS or ISIL, which has proclaimed a caliphate to rule over all Muslims from territory it controls in both Syria and Iraq.

The United States has been leading an air campaign against the group in both countries since last year. The Kurds have been the most important partner so far for the U.S.-led campaign in Syria, where Washington has far fewer allies on the ground than in Iraq.

The Kurdish front in northern Syria has been one of the few sources of good news for the global campaign against Islamic State since the jihadists made major advances last month near both Damascus and Baghdad.

A spokesman for the Pentagon said last week Islamic State forces had appeared to “crack” at Tel Abyad, the town at the Turkish border that fell to the YPG in less than two days, cutting Islamic State’s supply route from Turkey.

The YPG-led forces were battling Islamic State on the outskirts of a military base to the southwest of Ain Issa, according to the Syrian Observatory for Human Rights, which monitors the conflict.

Islamic State has held the base, “Liwa 93”, since capturing it from the Syrian military last year. If the Kurds take it, that would mean Ain Issa had effectively fallen, the observatory said.

Some refugees from the area have accused the YPG of driving Arabs and Turkmen from territory seized from Islamic State.

Kurdish officials deny forcing people out and say such accusations are being made to stir up ethnic strife. The Observatory says there is no evidence of systematic abuses by the YPG, though there have been individual cases.

The Kurdish advance is alarming the Turkish government, which is worried the growing Kurdish sway in northern Syria could inflame ethnic unrest among its own Kurdish population just across the border in Turkey’s southeast.

Ankara has conveyed to Washington its concerns about the displacement of non-Kurds around Tel Abyad, saying it saw signs of “a kind of ethnic cleansing” there.

The Syrian Kurds say they do not want their own state, but see their example of regional autonomy as a model for how to settle the war in Syria and elsewhere in the region. Their cousins in Iraq also have self-rule in an autonomous region.

The Kurdish administration’s growing strength has led to friction with the Damascus government, which has tended to avoid direct conflict with the Kurds during the four-year war while maintaining a foothold in areas where the Kurds hold sway.

Syrian government officials did not comment specifically on the Qamishli events but have said they suspect some Kurds of harboring separatist ambitions.

“In general, (the Kurds) and us are friends, but there is no state of permanent harmony,” a Syrian government official said by telephone on condition of anonymity.