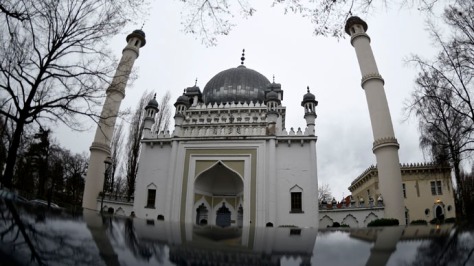 The mosque of the Lahore Ahmadiyya Movement for the Propagation of Islam is pictured on December 12, 2014 in Berlin. (AFP Photo)

A union of Turkish imams has announced that it will organize demonstrations in front of various media organizations across Germany in solidarity with France after the deadly attack at Charlie Hebdo’s office in Paris.

The Turkish-Islamic Union for Religious Affairs (DİTİB), alongside other immigrant organizations in Germany recently announced that on January 16 it will hold solidarity protests outside publishing houses and TV studios after Friday prayers, with precise times and locations to be announced later this week.

“We condemn the act in the strongest possible terms, but at the same time urge people not to be intimidated or become divided,” the organization said in a statement.

“We will always support freedom of expression in the press. Everyone should be free to express their views and publish them, without fearing for their lives.”

“The protection of human lives is a fundamental law of Islam,” DİTİB added.