At the push of a button, the gurney holding Auriel Peterson slides slowly into the pale blue glow of a magnetic resonance imaging machine. Soon, all that’s visible are the shins of her black track pants and the chartreuse-and-white soles of her running shoes, angled like the fins of a torpedo.

Behind a window in an adjacent room, a splayed-out cauliflower pattern appears on a computer screen in black and white. It’s Peterson’s brain. And it’s probably the last thing about this exercise that will be so simply shaded.

From Peterson’s perspective, the next hour will be spent in service, like the day she packed donated eyeglasses to send to Zimbabwe. But the ardent Mormon also knows she could be adding to a centuries-old debate about God and science.

So she says a silent prayer: “I hope they get what they need.” 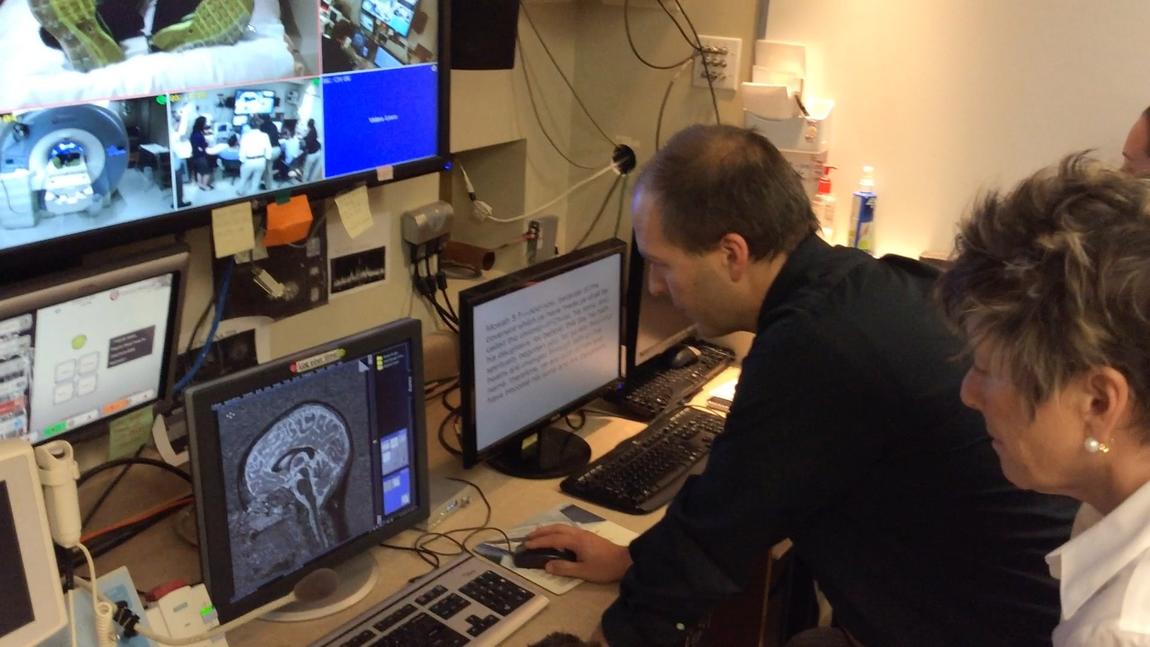 Other animals have hierarchies, organized behaviors, even a semblance of norms. Only humans have religion and science. And the two have seldom been on civil terms.

Jeff Anderson and Julie Korenberg, neuroscientists at the University of Utah, want to change that. They’re among a growing number of scientists aiming their field’s most sophisticated machinery at religious cognition.

“It amazes me how one of the most profound influences on human behavior is virtually completely unstudied,” Anderson said. “We think about how much this drives people’s behavior, and yet we don’t know the first thing about where in the brain that’s even registered.”

The researchers want to see more than religion’s registry on the brain. They want to know whether it differs across sects, or by intensity of belief. They want to see what genes it activates, what hormones it releases, and how it relates to social behaviors. Can the same basic circuitry produce Mother Teresa and the Sept. 11 hijacker Mohamed Atta? If so, how?

Right now, that depends on whether a maw of helium-cooled superconducting magnets can become Auriel Peterson’s personal church.To approach even speculative answers to such questions, the researchers have to capture what goes on in the brain of a believer during a religious moment.

The 26-year-old community college student lies still, clears her mind. The machine whirs and clicks, taking rapid-fire snapshots of the flux of blood to billions of neurons.

I want you to spend the next six or seven minutes in quiet prayer,” Anderson says into a microphone.

Anderson’s team has rigged a video screen above Peterson’s face, and placed a set of switches at her fingertips so she can convey how intense her religious feelings are when she sees quotes from Scripture or the Book of Mormon or images of religious figures.

We think about how much [religion] drives people’s behavior, and yet we don’t know the first thing about where in the brain that’s even registered.- Jeff Anderson, neuroscientist.

She is the fifth subject to be scanned, and the research team hopes to record 15 others before sorting through the data for something of significance to science.

And, maybe, to religion: Peterson wants to see how the spirit manifests on her brain too. So do a lot of other Mormons, apparently.

“Within a week of announcing that we were going to do this project, we had over a hundred volunteers,” Anderson said.

That surprised Anderson’s team. Expecting controversy, last year they held a public meeting about the project. Reaction was at times fractious, but mostly polite. So far, the Church of Jesus Christ of Latter-day Saints has taken no position on whether its members should participate.

“I think some people worry that we’re biologizing the religious response … that that will demystify it or make it somehow less important,” said Anderson, who was raised Mormon but left the church a decade ago.

“I think we’re trying to do something much more simple and that is look at private religious practice,” said Korenberg, who is Jewish, was raised in a Catholic neighborhood in Natick, Mass., and sings in a Christian chorale. “I think that what we’re expecting to find here is that Mormons aren’t really going to be that different from Jews or Muslims.”There are plenty who would relish any data that support the idea that God is all in the mind. But Korenberg and Anderson aren’t looking for how people come to believe in a supernatural being. They want to know what happens once they do believe.

Until now, Korenberg and Anderson have done what medical researchers do — studied abnormalities. She has spent 15 years investigating the neurochemical and genetic roots of Williams syndrome, an obscure brain abnormality somewhat like the inverse of autism; it causes people to become hypersocial but befuddled by simple objects. They have extreme emotional reactions to music, akin to religious ecstasy. 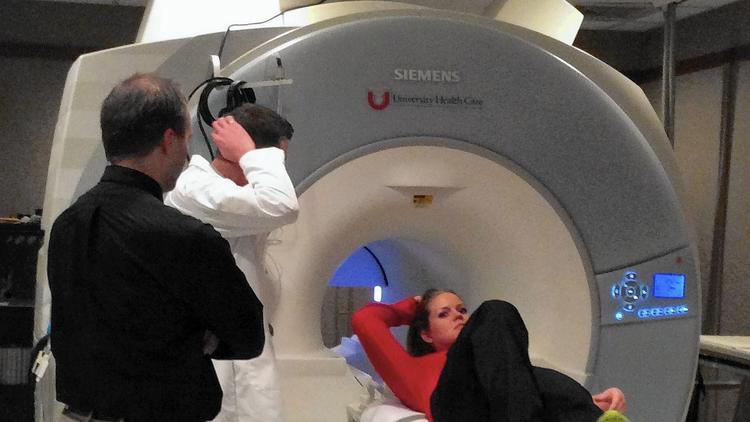 Anderson for his part, scanned the brains of people with autism, Alzheimer’s, multiple sclerosis. But he thought a lot about religion’s hold on the mind, and when he had the chance to scan Zen Buddhist monks a few years ago, he jumped. And he realized he had been overlooking a ready-made samplet in front of him: Mormons.

“They have thousands of hours of practice doing exactly the one thing that we’re interested in, which is identifying when they are feeling spiritual influences,” Anderson said. “And there also is a really generous tradition of participation in science and contribution, voluntarism, that makes for a really nice study design and a focused group.”

“There’s still value in doing those studies, even if the study doesn’t answer the big question — does God exist,” said Newberg, now the research director of the Myrna Brind Center of Integrative Medicine at Thomas Jefferson University and Hospital in Philadelphia. “We still learn about the brain; we still learn about the nature of spiritual experiences and practices. And those have practical implications.”Other scientists who started from similar premises have strayed into metaphysics. Neuroscientist Andrew Newberg began by scanning the brains of Franciscan nuns and Tibetan Buddhists and wound up founding “neurotheology,” which fuses science with mysticism. Newberg has co-written a series of bestselling books on the topic, including “Why God Won’t Go Away.”

Neuroscientist Mario Beauregard of the University of Arizona is writing a book criticizing the scientific belief that there eventually will be a material explanation for everything. His work helped disprove earlier studies that purported to find a “God spot” in the brain.

“There really is no such thing,” said Michael Inzlicht, a psychologist at the University of Toronto who also has studied religion’s effect on the brain. “Thinking of God could maybe activate certain spots of the brain, but they weren’t evolved for that purpose. They have evolved for some other reason and have been co-opted for religious cognition.”

Most neuroscientists have long since abandoned any search for a “God spot,” and settled on delving deeper into networks involving attention, salience, self-reflection, emotion and other functions.

Anderson and Korenberg are curious about chemicals produced or released by brain activity. Oxytocin, a hormone produced in the hypothalamus, has been associated with intimacy, fidelity and bonding, but also with social bias.

Peterson has been in the scanner for more than an hour when they slide the gurney out. She stirs, and asks for tissues. Tears streak her face.

Two assistants draw blood to test for levels of oxytocin and other chemicals and rush down the hall to put it in a centrifuge, then pack the samples on dry ice before such chemicals degrade. Then they lead Peterson to a meeting room for debriefing.

With pen and paper, she charts her emotional responses to each of the prompts. Then she checks off descriptions that fit her feelings, from a lexicon familiar to any Mormon — promptings, warnings, burning in the bosom, alignment of heart and mind, pure intelligence.

Although she describes herself as “young in spirituality,” Peterson, a third-generation Mormon, said she had ample practice at priming her mind for a spiritual state. The MRI machine wasn’t much of an obstacle.”I don’t have to pick one, right?” she says. “Good. There were so many.”

“I just had to tune out the noise,” she says. “I just tried to remember people and experiences.”

Some religious passages reminded her of people she had met on her mission, of elders, or of her father, an attorney in Fresno who emailed the ad for the Utah project and suggested she try it. Like him, Peterson was skeptical that science would show them much they did not already know about their spiritual life. But it was worth a try.

Peterson has trouble explaining what a religious moment is like. “It’s one of those things you have to experience,” she tells them. “It’s like witnessing a baby being born. Until you see it, you really don’t get it.”

Then she and the scientists exchange thank-yous. They walk out into the twilight, alone again with their own questions.