Defending Prophet Muhammad but Through the Pen Instead 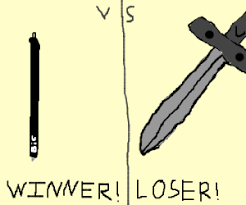 I, like everyone on the planet, have recently come to know in some way or form (print or TV or social media) of the terrorist attack on Charlie Hebdo and its staff. I react with disgust and abhorrence and wonder why someone would commit this act and worse, in the name of their religion, i.e Islam.

I fully condemn this act with all my being in the name of humanity.

But for me, the situation is even more tense because I am a Muslim-American and in my faith when a person kills another it is as if he or she killed all of mankind (Quran 5:33). The only tragic irony is that the Muslims who killed 12 innocent people at Charlie Hebdo did not see or feel this. They shouted, “Allah-o-Akbar” in the midst of their dastardly act while proclaiming that they were defending the honor of Prophet Muhammad.

I am here to tell you all that I too defend the Prophet but in the very way that these masked terrorists were trying to destroy. My pen is mightier than their guns could ever be.

I am part of a broad network of writers called the Muslim Writers Guild of America and our articles span a vast array of areas where Islam is being defamed in the media and we are there to defend it with ideas and arguments. We represent the Ahmadiyya Muslim Community worldwide and I even tweeted after the recent attacks that our response after Charlie Hebdo cartoons was remarkably different.

The founder of this community we represent, Mirza Ghulam of Ahmad of Qadian whom we believe to be the Messiah of the time, penned more than 80 books in the defense of Islam. And yet this single act of these three gunmen insulted the Prophet Muhammad more than Charile Hebdo or others could do against him.

In the Holy Qur’an the Prophet Muhammad is given a divine title “Mercy for all Peoples” and his example befitted it (Qur’an 21:108). All documented evidence has foretold that his forgiveness was unparalleled when it comes to human history.

He forgave a man who caused fatal injuries to his daughter and her unborn child, a woman named Hinda who during a battle partook in mutilating his beloved uncle Humza, a Jewish man who defiled his mosque and left without telling so he had to clean himself, all of the people of Mecca who persecuted Muslims for more than 20 years, and finally even those who personally mocked him.

When these gunmen and others like them take innocent lives, no matter who they are, because of mere mockery against the Prophet, then they should know that his example was different. Other faith-based people used to call names or mocked Prophet Muhammad or Allah — name singly given to God — in his time too. But Prophet Muhammad never encouraged violence or worldly punishment in response and even stopped his followers from doing the same thing back to their revered objects or persons of life.

“And revile not those whom they call upon beside Allah, lest they, out of spite, revile Allah in their ignorance. Thus unto every people have We caused their doing to seem fair. Then unto their Lord is their return; and He will inform them of what they used to do (Qur’an 6:109).”

Sadly the extremist mind does not care about this and end it here.

The extremists within Islam have taken the insulting of Prophet Muhammad to a whole new level where they have attached their own definition to it. The members of the Ahmadiyya Muslim Community worldwide follow all the tenets of Prophet Muhammad’s guidance and read the Qur’an, and due to this have peacefully existed for 125 years without incident. However, the government of Pakistan has state sanctioned them as non-Muslims and everything they do as insulting Prophet Muhammad.

This unruly situation within Pakistan allowed for gunmen to have stormed into Ahmadi-Muslim mosques on May 28, 2010 and killed more than 80 members while they were in the midst of their Friday prayers. And every year since then, killed many more singly in various places within Pakistan.

I can go on and on, but the point is that the extremist mind twists everything in the favor of furthering its own personal agenda — nothing related with religion. The truth is that these gunmen themselves were half-baked Muslims when it came to following their faith, according to documented overtly callous anti-Islamic behavior. Yet, they wanted to defend the very religion that they were not ready to follow themselves and insult it in the process.

I must say at a time like this we cannot give into their hate so that it can divide us. The only way to defeat their extremist agenda and to honor the lives of this tragedy is for all of us to be united against them. Islam is not at fault here and Ahmadi-Muslims everywhere will be ready to defend it and the Prophet Muhammad, but with their pen alone.