Then We caused Our Messengers to follow in their footsteps; and We caused Jesus, son of Mary, to follow them, and We gave him the Gospel. And We placed in the hearts of those who accepted him compassion and mercy. But monasticism which they invented for themselves — We did not prescribe it for them — for the seeking of Allah’s pleasure; but they did not observe it with due observance. Yet We gave those of them who believed their duereward, but many of them are rebellious. (Al Quran 57:28) 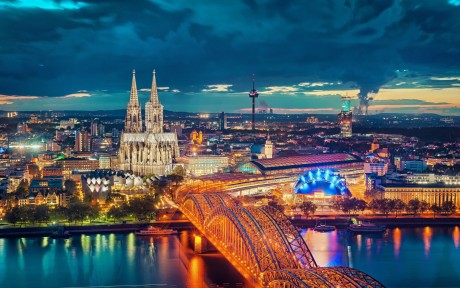 Cologne Cathedral and Bridge in Germany

German priest Stefan Hartmann has sent a personal petition to Pope Francis asking him to waive his vow of celibacy, which he posted on his Facebook page.

As Francis continues his leadership of the Catholic Church, many have wondered whether there will be a change in the requirement of priestly celibacy, a practice which has gone on for hundreds of years.

Hartmann secretly fathered a daughter in 1989, eight years after he took his vow of celibacy, reports The Local.de. He revealed her existence on a televised talk show in January of this year, causing his superiors to ask him to step down from his position. However, he seeks a path which will allow him to remain a priest while raising his daughter in a family.

In the letter, Hartmann asked to be released from the traditional oath “in acknowledgement of my weaknesses and failures, with all due humility and after long consideration of my conscience and personal situation.”

In another post about priestly celibacy, Hartmann argues that allowing Catholic priests to remain ordained outside of celibacy vows would “bring solutions and relief in many cases.”

“There is a human right to partnership, marriage and parenthood, even if you can forego it willingly for religious reasons,” he said.

Hartmann also believes that abolishing the requirement for priestly celibacy could encourage more young Catholics to enter the priesthood, at a time when numbers are flagging.

Francis reportedly addressed the issue last week during a conversation with a bishop from Brazil, Austrian-born Erwin Krautler. Krautler’s diocese faces a shortage of priests, with just 27 meeting the needs of 700,000 Catholics. According to Krautler, “The pope explained that he could not take everything in hand personally from Rome. We local bishops, who are best acquainted with the needs of our faithful, should be ‘corajudos,’ that is ‘courageous’ in Spanish, and make concrete suggestions.”

Francis’ secretary of state, Cardinal Pietro Parolin, also seemed open to the idea of discussing a change in the policy towards married priests when he explained last fall that celibacy “is not a church dogma and it can be discussed because it is a church tradition.”

Eastern Catholic churches in the Middle East and Europe ordain married men, a practice which has gone on for hundreds of years. In 2009, Pope Benedict XVI allowed married Anglican converts to become Catholic priests.

German media outlets reported that the response to Hartmann’s letter has been largely postive. The Vatican has yet to respond