Liberal Leader Justin Trudeau and his wife, Sophie Grégoire, are the proud parents of a third child.

The Liberal leader announced his wife’s pregnancy back in August by tweeting a cute family photo .

Coincidentally, little Hadrian was born on the 30th anniversary of Pierre Elliott Trudeau’s “walk in the snow.”

Trudeau and Grégoire married in 2005 after a whirlwind romance. Their first child, Xavier James, was born on Oct. 18, 2007 — Pierre Elliott Trudeau’s birthday. Their daughter, Ella Grace, was born Feb. 5, 2009.

Many MPs, including Prime Minister Stephen Harper and NDP Leader Tom Mulcair, took to Twitter to congratulate the Trudeaus on Friday morning.

Grégoire was unable to attend last weekend’s Liberal convention but appeared on the big screen to wish her husband well. 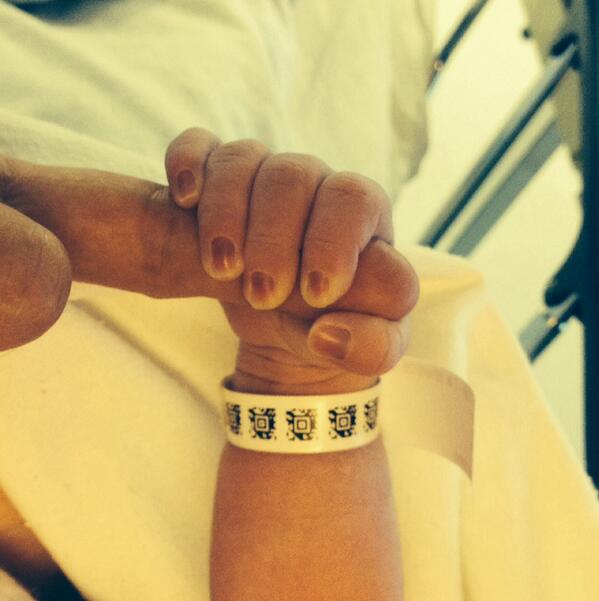 Friend Thomas Panos first learned that Justin Trudeau was in love when he called in June of 2004 asking for a business-class ticket to Athens for his girlfriend. Trudeau was attending the Olympic Games as a reporter for CKAC.”She’s the one,” he told Panos. He had met Sophie Grégoire, a childhood friend of his brother, Michel, when she and Justin co-hosted a Starlight Children’s Foundation event. They’d hit it off, and the following day she sent him an email suggesting they meet up. But Trudeau never responded.

“I knew that the day I went out for coffee with her, that would be the last day I would ever have as a single man,” Trudeau told CPAC’s Catherine Clark on the program “Beyond Politics” in 2009. He had a few loose ends to wrap up, he said. Three months later, Trudeau bumped into Grégoire in Montreal and apologized for not writing back. They went out and over dinner he told her they would have to skip dating and go straight to engagement. “I am going to spend the rest of my life with you,” he declared.

There was nothing impulsive about his decision, he told Clark. “It was a deep recognition that Sophie was the person I wanted to spend my life with.”

Grégoire opened up about her family to The Globe and Mail last February. She told the newspaper she is confident her husband can be both a good father and successful leader and that her kids possess the inner peace to handle the spotlight.

“I realize now, they were born to this,” she said. “It’s normal for them when they see a huge group of people and everyone’s rushing up – they’re not stressed.”

To celebrate the news, here’s a pretty funny GIF of the couple cutting a rug just before last year’s Liberal leadership showcase, created by Tara Hunt from photos taken by Adam Scotti.