Ramadan 2022: From India to Indonesia, a Look at Ramzan Celebrations Across the World

Different countries follow different traditions throughout the holy month, while the basic conception of religious value remains the same. The diversity of customs is much seen in middle east countries, and people show great enthusiasm while following the same. 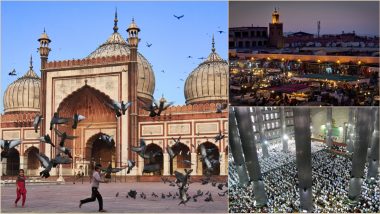 Muslims across the world every year foresee the sighting of a new moon before the commencement of the holy month of fasting, Ramadan. And it starts a day after the moon sighting committee sights the moon in Saudi Arabia. Different countries follow different traditions throughout the holy month, while the basic conception of religious value remains the same. The diversity of customs is much seen in middle east countries, and people show great enthusiasm while following the same. We have picked some countries to look through and see how they celebrate the holy month of Ramadan. Ramadan 2022 Dos and Don’ts Guide: Here’s a List of Things One Must Keep in Mind During the Islamic Holy Month of Fasting.

There is a wide range of ethnic groups and tribes in Iran who follow different ways to celebrate the holy month of Ramadan. People of Mazandaran (Northern province of Iran) fast three days before the start of Ramadan as a necessary drill in the month of Shaban.

Nearly 13% of the world’s population of Muslims lives in Indonesia, making it the world’s largest Muslim populated country. Indonesia has diverse and unique customs for Ramadan. Some groups have a tradition of cleaning the graves of their late relatives before the commencement of Ramadan, while some people march through streets while holding colourful torches in their hands. Meugang is a centuries-old tradition of the conservative province of Aceh, in which people break their fast by slaughtering cattle and eating together and sharing a meal with the poor as well.

Sahar khan or drummers roam around in colonies at suhoor time to wake up people in order to have their meal before Fajr prayer. At iftar time when fast is broken people in morocco have a special broth called ‘Harira.’

Famous for its Turkish delights, people in Turkey usually love having desserts and coffee along with suhoor and iftar other than the main course.

When it comes to customs and cultures, irrespective of whatsoever the religion may be, both countries share common values. People in Old Delhi break the fast by assembling at the famous Jama masjid and in Lahore at Badshahi masjid, an alike of former. The famous sharbat or sweet drink ‘Rooh Afzah’ is a must at after time, loved in both countries. Men prefer wearing traditional Kameez Shalwar attire and a head cap throughout Ramadan. Ramadan 2022 in India: Start Date, Fasting Rules and Significance of Celebrating the Muslim Holy Month.

The whole air changes with the arrival of Ramadan, and peace and love resonate in every corner of the world. And finally, when the last day of fasting ends, a day of joy arrives known as Eid-ul-Fitr.

(The above story first appeared on LatestLY on Mar 26, 2022 12:08 PM IST. For more news and updates on politics, world, sports, entertainment and lifestyle, log on to our website latestly.com).