‘I am dead here’: Lebanese join Mideast migrants to Europe

Ziad Hilweh knew his family might die on the way. But the risk was worth it, he said, to reach the shores of Europe for a new start with his wife and three kids, away from the daily humiliation of life in Lebanon. 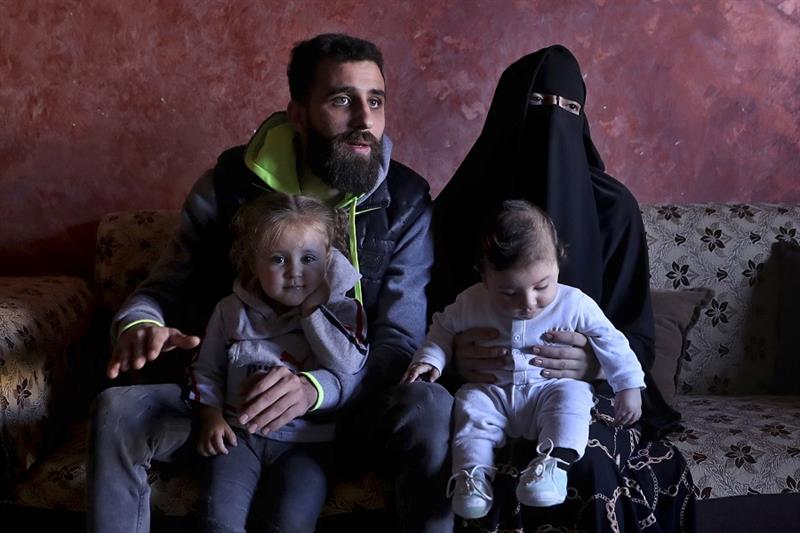 Ziad Khaled Hilweh, 23, who tried to migrate to Europe with his family, speaks during an interview as he sits with his wife Alaa Khodr, 22, his daughter Jana 2 year-old and his son Karim 3 months, at his parents house in the northern city of Tripoli, Lebanon, Monday, Dec. 6, 2021. AP

The country’s economic meltdown had destroyed him. The currency crash meant that the value of his salary from working at a private security company fell from $650 a month to about $50 after the Lebanese pound lost more than 90% of its value in less than two years. It reached the point the 22-year-old could no longer afford milk and diapers for his children.

But the young father’s hopes of a better future were shattered last month, when the boat they were on board headed to Italy broke down in the Mediterranean Sea, hours after they set off from the outskirts of Lebanon’s port city of Tripoli. Along with dozens of other would-be migrants on the boat, they were towed back to shore by the navy after a terrifying attempt at escaping.

For years, Lebanon has been a host for refugees, mainly from Syria, but now it is a departure point. Hundreds of Lebanese have tried to reach Europe this year on boats from their country’s shores, spurred by a devastating economic crisis that has thrown two thirds of the population into poverty since October 2019.

It is not a route on the scale of the main sea path from Turkey to Greece used by many refugees and migrants. But it is a startling shift as Lebanese join Iraqis, Afghans, Sudanese and other Middle Eastern nationalities in leaving their homelands.

Sea departures from Lebanon have increased starting in 2020, compared to previous years, said Lisa Abou Khaled, spokeswoman for the U.N. refugee agency. According to UNHCR figures, more than 1,570 people embarked or attempted to embark from Lebanon between January and November, most heading for Cyprus. The majority have been Syrians, but Abou Khaled said a notable number of Lebanese have joined them.

“It is evident that these are desperate journeys undertaken by people who see no way of survival in Lebanon,” said Abou Khaled.

The country is witnessing a frightening convergence of multiple crises, including political instability, the coronavirus pandemic and a massive explosion at the capital’s main port in August last year that have all added to the financial unravelling of the country.

Hilweh had been growing more desperate with each day. For months, he asked relatives and friends to help him financially. Chatting with friends one night, he heard that smugglers were taking people to Europe, and that some have already made it there.

He and a close friend, Bilal Moussa, decided to give it a try. Hilweh decided to take his wife and children, while Moussa planned to go alone and apply for family reunification once he settles in Europe.

“I am dead here and might die on the way. But if I reach the destination, I can live a decent life,” Moussa said.

The smuggler told them to meet at a location near Tripoli’s Abu Ali river shortly before midnight on Friday, Nov. 19, and that 70 people would be on the boat. At the location, they were put into a covered produce truck and driven to Qalamoun, just south of Tripoli.

There, at an abandoned resort, they boarded the wooden boat with their belongings. Around midnight, as they left shore, the smuggler began reading the names of people on board.

There were 92, instead of 70, including about two dozen Syrian and Palestinian refugees.

They quickly ran into trouble. A Lebanese navy ship approached the boat, ordering them through loudspeakers to turn back. The captain ignored their calls and kept moving west.

The navy ship circled them, causing waves that shook the boat and threw water inside. The shaking grew more violent as the ship drew closer, filling it with more water that pushed it down. The screaming passengers spread out around the boat to balance it and threw bags into the sea to keep it afloat.

Hilweh’s wife and children were sitting near the engine, and when the boat flooded with water, thick smoke poured out. His 3-month-old son Karim stopped breathing and almost suffocated, he said.

“He lived and died in front of me,” he said, recalling the panic before Karim was breathing again.

“I started reciting the shahada,” said Hilweh’s wife, Alaa Khodor, 22, referring to the profession of faith in Islam that Muslims recite when close to death.

Eventually, the boat stabilized, and they kept moving west while the navy chased them. Looking at a screen, the boat’s captain shouted that they had left Lebanon’s territorial waters. Immediately, the navy ship turned back.

“I felt very happy. I am out of Lebanon. I have crossed the line of humiliation,” Hilweh recounted. He celebrated by hugging his wife and two daughters, Rana, 3, and Jana, 2.

Their relief was short-lived. Shortly before sunrise, the water-logged engine gave out completely. Stalled in the darkness and silence, the frightened passengers frantically called relatives in Lebanon to tell the military they needed help.

Hours later, the Lebanese navy finally arrived and towed the boat back.

“Once the boat stopped, I felt everything go dark, I felt devastated,” Hilweh said. “When we arrived back I had tears in my eyes.”

Back in Tripoli, the men were separated from the women and children and questioned for hours. The smuggler is still in detention, Hilweh said.

Tripoli is Lebanon’s most impoverished city. Its mayor, Riad Yamak, said that last year, several people drowned off the coast of Tripoli while trying to reach Europe.

Last year, a boat taking migrants to Cyprus ran out of diesel and was stranded for eight days, during which at least six persons died. The U.N. peacekeeping forces in Lebanon, known as UNIFIL, rescued the rest and handed them over to Lebanese authorities after giving them first aid.

“This is suicide when someone takes his family by sea,” Yamak said.

Hilweh and his wife disagree. They have already lost their apartment, their car and Hilweh’s job. They said they will keep trying until they make it to Europe even if this means putting their lives and those of their kids in danger again.

“I will take any danger to get out of here. There is nothing here,” Khodor said.