Bosnia is lurching toward crisis, once again. Milorad Dodik, the Serb member of Bosnia’s tripartite presidency, is threatening to withdraw the Serb-majority half of the country from statewide institutions. His goal is secession. It’s a dangerous moment for Bosnia. 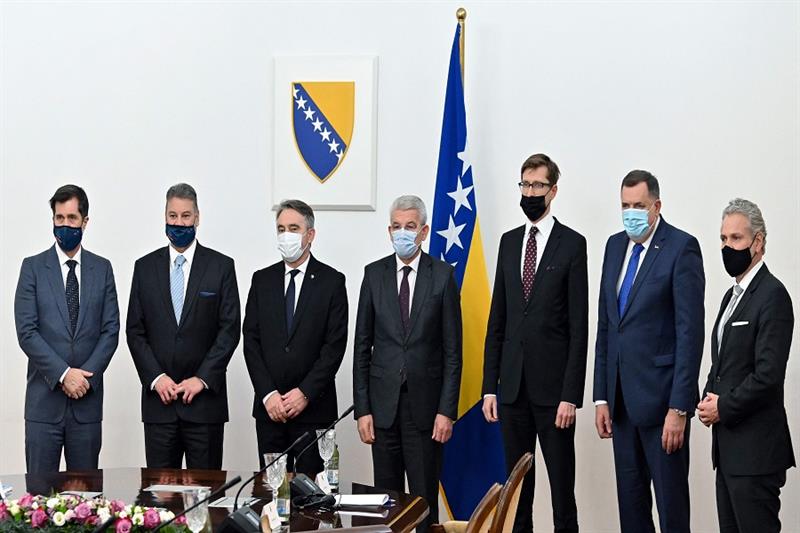 But it’s not the first, and unless the United States changes its own policy toward Bosnia, it won’t be the last. America helped create Bosnia, and is uniquely positioned to intervene. But secession is a symptom; the sickness is Bosnia.

After World War II, Bosnia was a republic inside communist Yugoslavia, and the only one with no ethnic majority. Three groups – Bosniaks, Serbs and Croats – lived in a complex, intermingled society. When Yugoslavia collapsed in the early 1990s, Bosniaks and Croats voted to break away, but Serbs resisted, and a three-way war broke out. Serb forces committed the most war crimes, Their attack on Srebrenica killed about 8,000 Bosniaks and was declared a genocide by two internationalcourts. By war’s end, all three territories were ethnically homogeneous.

The Clinton administration intervened militarily and forced all three sides into negotiations. Unsurprisingly, given the deep divisions created by the war, the 1995 Dayton Peace Accords created a highly decentralized state with two large self-governing “entities”: Republika Srpska and the Bosniak-Croat Federation. The three communities’ representatives in Bosnia’s parliament and presidency hold effective vetoes over the actions of central institutions and changes to the constitution.

The original design of what is often called “Dayton Bosnia” included very minimal central powers, but it also gave the U.S. and other states considerable power to intervene in governance. In the decade after Dayton, the U.S. engineered a centralized army, taxation and customs – the very institutions from which Dodik now wants to withdraw. To this day, the U.S. and other states have continued oversight authority, including an effective veto over changes to the constitution. An internationally appointed high representative can impose legislation, a power rarely used after the first decade (although in July a law criminalizing genocide denial was adopted).

From an initial U.S. and NATO presence of 60,000 troops, only a few hundred European peacekeepers and a small NATO headquarters remain. Recent U.S. policy has relied on the promise of Bosnia’s eventual European Union membership to encourage cooperation among the ethnic groups, but Bosnians know the EU won’t admit them.

With good reason. Since Dayton, there’s been peace, but little else: a moribund economy, failed reconciliation, a country thrice-cleaved. Dayton is often blamed for Bosnia’s dysfunction, but that’s a half-truth: “Dayton Bosnia” is dysfunctional – but which part is failing?

Not Dayton: It’s designed to prevent effective governance and to ensure that no one of Bosnia’s three groups might dominate the others. Dayton’s compromises were the logical culmination of Bosnia’s war – the tribute reason paid to power.

No, the dysfunction is Bosnia – the idea that this territory, whose three peoples lack shared identity, is a sensible unit. A quarter-century on life support suggests it isn’t.

Policymakers interpret the current crisis as a test of Western resolve: Increase the pressure again, add new sanctions or deploy more troops. But to what end? America keeps trying to fix Dayton but treats Bosnia as a given, and then wonders why the treatment doesn’t take. There’s no exit strategy: Just stabilize the patient, again.

Meanwhile, half of Bosnia’s population would support secession and half its youth want to emigrate. Why not view Bosnia’s dilemma as data? America’s policy isn’t working because Bosnia doesn’t. The U.S. intervened to end a war, but the challenge is different now. Then-Sen. Joe Biden supported that intervention. President Biden needs an alternative.

There is one. Secession isn’t just a symptom. It could be a cure.

There are plausible outcomes: a smaller Bosnia that could efficiently govern itself, mergers of Croat and Serb areas with Croatia and Serbia, transit arrangements for enclaves. The U.S. could trade recognition of independence for Serb concessions on these issues – reparations, formal apologies, guarantees for minorities. Hard questions that diplomacy would have to resolve – and could. But America wouldn’t need to impose division – not opposing it is enough.

Secession has been off the table because America has excluded secession as an option beased on three unexamined strategic and moral assumptions. First, policymakers assume secession means war – yet so might continued paralysis. And U.S. policy ignores the likely source of violence. Bosnia is so divided that separation could be achieved peacefully, unless Bosniaks start fighting.

Second, an impoverished geopolitics assumes that because Russia backs the Serbs, America should oppose them. But Bosnia’s fragility generates instability. The U.S. is conceding Russia a Balkan foothold – for what? Why not outflank Russia and draw new stable states closer to NATO, as we’ve done with Montenegro, Croatia and Slovenia? Regional security and integration would actually be easier with units that aren’t so internally brittle.

Third, there’s an assumption that seems to answer every doubt about continuing to pursue a failed policy: Secession would validate genocide. I edited a book on Slobodan Milosevic’s trial and helped indict five Serbs for war crimes, so I’m under no illusions. But atrocities have a context. An independent Republika Srpska would have little reason to pursue violence, but forcing unwilling communities into political union is destabilizing – as we’re seeing now. It’s unwise and it doesn’t vindicate the dead. Memorials, reparations and trials are meaningful responses – but a state? Only if the living want it.

Bosnia isn’t a moral imperative. It’s a country, and a failed one – not because it’s poor, corrupt and dysfunctional, but because many Bosnians don’t believe in Bosnia. America’s policy is to insist they change their minds.

I study secession: Sometimes it’s a sensible response to an intractable political problem – better than just doubling down on what’s not working. Supporting secession in another country might feel like interfering – but so is forcibly holding that country together. The U.S. has been engineering Bosnia since 1995. Reengaging now, including proposals to dissolve Republika Srpska – as if that wouldn’t risk war – means more engineering. The question is, for what purpose?

If the reason is to avoid secession, ask why. If the answer is “to avoid war,” ask where our present policy is headed, and how many troops are needed. And when the present crisis passes, let’s have the courage to ask whether insisting on Bosnia makes sense. How long will America keep Bosnia in crisis? Until it works? Until its people stop wanting something else? Right now, those sound like euphemisms. Right now, the answer to our unasked question is “forever.”