An interview by Foreign Minister Mohammed Javad Zarif has provoked outrage in Iran. In it, Zarif criticised the Revolutionary Guards’ destructive role in both the nuclear agreement and the Syrian war. Ali Sadrzadeh has the details

Since the age of 18, Mohammed Javad Zarif has consistently presented himself as unshakeably convinced, media savvy and power conscious. Even when he was proselytising for political Islam under the California sun during the student movements of the 1970s, nearly 42 years ago.

Mohammed Javad Zarif weathered all the power fluctuations of the past century and has also managed to survive the often life-threatening intrigues of the Islamic Republic. Today, he is 61 years old and has almost reached the end of his march through the institutions. His term as foreign minister is due come to an end in a few weeks.

What will become of the man some call “the smiling face of a ruthless theocracy” after that, no one knows. Some credulous circles see him as the future president of Iran, others would rather see him in prison than in the presidential palace. For a dead, but still omnipresent adversary could now prove Zarif’s undoing.

The long shadow of Qassem Soleimani

“Hunter of hunters” – these three words were written under the picture of the commander of the Quds Brigades, Qassem Soleimani, which adorned the T-shirts of millions of Shia pilgrims who tried to cross the border with Iraq in the hot summer of 2016 in the Iranian desert. Their destination was the city of Karbala, 280 kilometres away.

The heroic designation for the head of the Quds, the outlying arm of Iran’s Revolutionary Guards, came from Putin supporters, Iranian media claimed. Since then, the global pandemic has put an end to mass pilgrimages to Karbala, and Soleimani was killed in a drone strike at the Baghdad airport in January 2020 on Trump’s orders. Last Sunday (4/25), Iranian Foreign Minister Zarif set the record straight about the general’s true image, including his relationship with Putin. 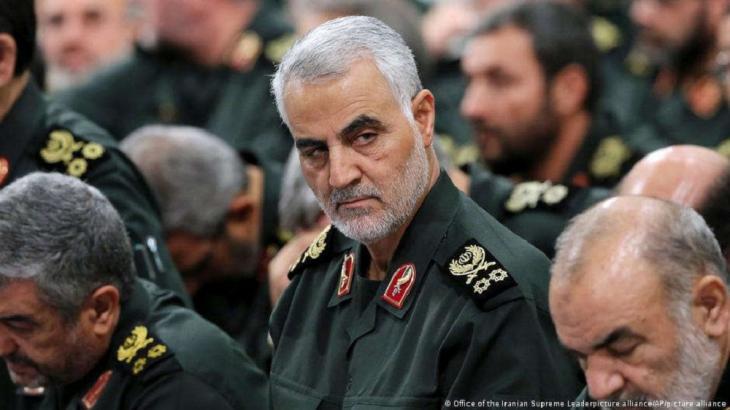 Iranian Foreign Minister Mohammed Javad Zarif under pressure: in a “secret interview”, Zarif painted a picture of Qassem Soleimani, the former commander of the Al-Quds brigade, as “a man with a destructive drive for dominance, a power-conscious jack-of-all-trades who wanted to dominate everything and everyone. He describes him as a man with an all-encompassing claim to power who would answer to no one,” says Iran expert Ali Sadrzadeh. Zarif has since apologised for his critical remarks toward the political system and the Revolutionary Guards (IRGC) in particular

Iran‘s hero was a vassal of Putin

For six years, radical media in Tehran had circulated information that it was General Soleimani who persuaded Putin to intervene in the Syrian war during a visit to Moscow. Now, however, the chief diplomat in Tehran is speaking his own truth: according to Zarif, it was the other way around. Putin ordered the commander of Iran’s Quds Brigades to Moscow.

Is Javad Zarif risking everything? Why is he revealing valuable secret and actionable information that can only originate from his country’s worst enemies? Is he trying to commit “political suicide”, as some Internet commentators write? What is his aim? Often, certainties are as fleeting as time itself. But can truth strike like a bomb, or lead to dramatic aftershocks, as in an earthquake? Without doubt, it can.

Five days ago, Javad Zarif detonated this media bomb, the far-reaching consequences of which are only gradually becoming apparent. They will determine his personal fate, as well as the outcome of the upcoming presidential election in June, for which the Revolutionary Guards are already preparing.

The “bombshell” was a three-hour recording of a seven-hour interview with economic journalist Said Leylaz, a confidant of President Hassan Rouhani, held two months ago. According to a statement, the journalist wanted to conduct interviews with the president and his ministers for an “oral history” project about the Rouhani years in office, which are coming to an end.