(CNN) Hindu devotees packed the streets of Haridwar, in northern India, on Monday for the largest religious pilgrimage on Earth, in scenes that defied social distancing rules just as Covid-19 infections soared in the country.

As many as 5 million visitors were expected to descend on the city Monday — an auspicious day in the ongoing Kumbh Mela religious festival, which was delayed this year due to the coronavirus pandemic.

At the festival, devotees wash away their sins in the river’s sacred waters, which are believed to turn into “amrita” — the nectar of immortality — on auspicious days like Monday.

At least 650,000 people had already taken a dip in the river by early Monday, according to police Insp. Gen. Sanjay Gunjyal. Throughout the day, there will be an estimated 11,000 to 18,000 people in the water at any time, spread across the 15 main riverbanks, said Mukesh Thakur, a senior police official. 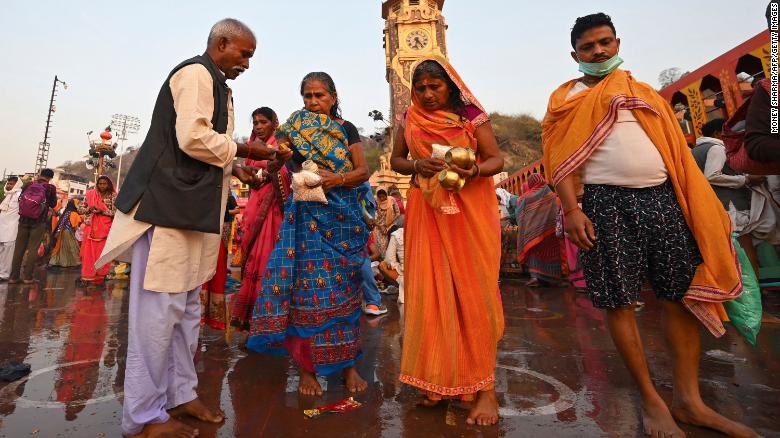 Hindu devotees prepare to take a holy dip in the Ganges River in Haridwar, India, on April 12.The massive crowds are causing concern as India struggles to contain a worrying second wave, with cases rising dramatically every day.

“Social distancing is proving very difficult,” Gunjyal said. “If we try to enforce it then it can lead to a stampede — that’s why, despite wanting to, we are unable to implement social distancing at these riverbanks.”He added authorities were “continually appealing to people to wear masks and follow Covid-appropriate behavior.”