The Creeping Return of Anti-Semitism to Munich: “We Can Never Again Be Silent”


“We Can Never Again Be Silent”

The Creeping Return of Anti-Semitism to Munich

The German state of Bavaria has become home to a rising number of anti-Semitic incidents, with many of them linked to protests against coronavirus measures. Jews in the state are growing increasingly nervous.

A participant in an anti-corona demonstration wearing a yellow Star of David Foto: Daniel Biskup / laif 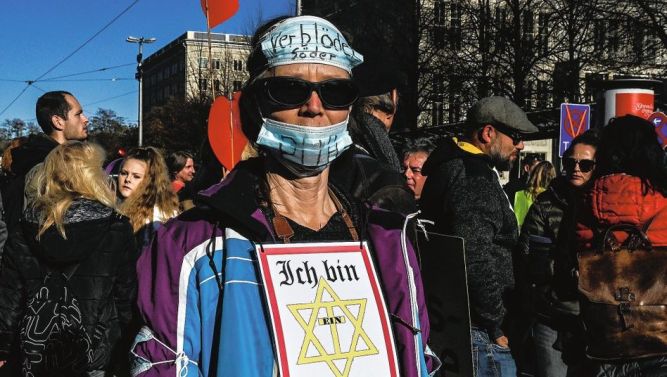 Max Brym is wearing the blue jacket he always wears when riding the commuter train to soccer practice out in Riem, a neighborhood on the edge of Munich. It is the jacket of his sports club Maccabi, with a small Star of David on the front and a larger one on the back. Maccabi is a Jewish club, after all. Brym, 63, says that people often stare at his jacket and he frequently hears comments like: “What, are the Jews playing football now?”

Brym is the coach of a youth team, and quite a few of the players aren’t actually Jewish. But during games, Brym says, anti-Semitic slogans are far from a rarity. “One time, a trainer asked his team: Why do we have to lose to the Jews, of all teams?”

But his most shocking experience came in May, he says, as he was walking his dog in the English Garden, Munich’s vast urban park. “Suddenly, a guy came up to me on an old mountain bike and yelled: ‘You shit Jews are to blame for this corona shit!’ and ‘You Jewish filth!'” When Brym ran in his direction, the man took off, says Brym. “On his T-shirt was ‘Corona Denier’ and ‘Anti-Vaxxer,'” says Brym, a former university lecturer for philosophy and history.

The Department for Research and Information on Anti-Semitism (RIAS) in Bavaria registered more than 100 such anti-Semitic incidents in the state in 2020. The leader of RIAS in Bavaria, Annette Seidel-Arpacı, says there has been a “worrisome increase” in anti-Semitism among conspiracy theorists.

At one protest against the measures implemented to contain the coronavirus, according to RIAS, demonstrators held up a photomontage showing people being forcibly vaccinated by uniformed officials. The emblem on the uniforms strongly resembled the Star of David and bore the inscription “Zion.” Seidel-Arpacı says that many events held by corona-truthers and other conspiracy theorists have included people wearing fake Jewish stars, essentially trying to portray themselves as the victims of discrimination. It represents a shocking relativization of the crimes committed against the Jews in World War II. “They are spreading the anti-Semitic narrative of an allegedly secret group that rules the world and which seeks to plunge ‘the people’ into misfortune,” says Seidel-Arpacı.

Bavarian Interior Minister Joachim Herrmann has also issued a warning against conspiracy myths similar to the QAnon cult in the United States. He says in Germany, too, anti-Semitic prejudices are being spread, with Jews being accused of being both the “masterminds and the beneficiaries of the pandemic.”

It is a dangerous mix that the pandemic year has produced in Germany. Conspiracy theorists and right-wing extremists have joined forces and are further fanning the flames of hatred against Jews – which had already been on the rise even before the pandemic. Brym refers to the new conspiracy theorists as “oil on the fire” of anti-Semitism.

The firebrands are on the march nationwide. But the Bavarian chapter of RIAS has counted the largest number of corona protests with anti-Semitic elements. The number of registered anti-Semitic crimes has also risen particularly rapidly in the state. According to the Bavarian Interior Ministry, there were 310 such incidents in 2019, more than 40 percent more than in the previous year.

“Bavaria long seen itself as a safe state for Jews. Now, the bitter truth is becoming apparent.”

Annette Seidel-Arpacı, head of the Department for Research and Information on Anti-Semitism (RIAS) in Bavaria
Most of the offenses, according to the ministry, were perpetrated by right-wing extremists. But what is the explanation? Is it simply a case of charges being filed in more instances? The ministry says there is no evidence of that and, according to a spokesperson, the number of cases remained at a “high level” in 2020 as well. The Bavaria State Criminal Police Office says there were 288 incidents through November of last year, with the state capital of Munich – the city that is home to the largest Jewish community in the country – registering the largest number.

“Bavaria long seen itself as a safe state for Jews,” says Seidel-Arpacı. “Now, the bitter truth is becoming apparent.”