Shrouded in mystery — the history of Jeddah’s non-Muslim cemetery 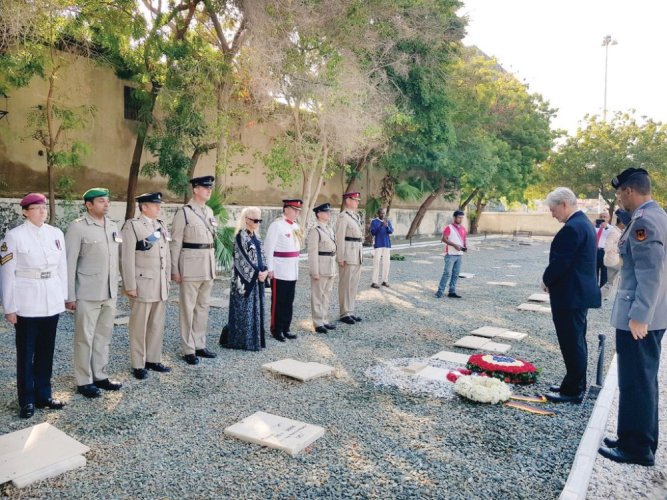 The graveyard is located close to one of the city’s busiest streets, yet most people passing by are unaware that behind the high walls lie the final resting places of many people of other faiths. (Supplied)

Some believe the graveyard, which was attacked this week, dates back to the 16th century and is the final resting place of thousands of foreigners

JEDDAH: The peace and serenity of Jeddah’s non-Muslim cemetery was shattered on Wednesday by the sound of an explosion, as it came under attack for what is thought to be the first time in its history.

The graveyard is located close to one of the city’s busiest streets, just south of its downtown area, yet most people passing by are unaware that behind the high walls lie the final resting places of many Christians and people of other faiths. There are about 300 marked graves in the cemetery but some historians believe thousands of people have been buried there over the years.

Hushed secrets and rumors have circulated for years about the cemetery and its origins but no one really knows for sure when burials began there. At some point the location became known locally as “Khawajat,” an Arab term for foreigners.

Some researchers and historians suggest the cemetery dates back to about 200 years ago. Jeddah was under Ottoman rule at the time and many foreign merchants passed through the city, which was a thriving trade center and a gateway to the Arabian Peninsula.

Others believe its origin lies even further back, in the 16th century, and specifically a battle for control of the city in 1517 between the Portuguese Empire, led by Lopo Soares de Albergaria, and the Mamluk governor of the city, Amir Husain Al-Kurdi.

Commemorating the centenary of the end of World War I, European consuls general lay wreaths together in the spirit of European cooperation at the graves in the non-Muslim cemetery in Jeddah on Nov. 11, 2018. (GermanyinKSA)
Some historians believe the Portuguese surrounded the city for three months, others say the siege continued for as many as 13. There were casualties on both sides and it is thought that fallen Portuguese soldiers were buried outside of the city limits. Residents of the area later took it upon themselves to preserve the area as a burial ground for non-Muslims.

Jeddah has for centuries welcomed visitors of many nationalities and faiths, some of whom were just passing through while others decided to settle in the city. Historically, it would have been difficult and expensive to transport the bodies of foreigners who died there back to their home countries, so for many it became their final resting place.

For years, the consulates of nations such as the UK, the US, France, Germany and Ethiopia have maintained the cemetery and its graves, and provided the funds to pay for a groundskeeper.

For more than 18 years that has been Younis, an African Muslim who, among other things, polishes the graves, removes decaying floral displays and prunes the trees that provide shade for visitors.

“Many find the cemetery to be a strange place for reasons only known to them,” he said. “It’s just like every cemetery. There are people buried here that go back 50 to 60 years and more.

“Many people pass through and pay their respects to the buried, and pray according to their cultures and traditions. Some light candles, while others cover the grave with rice — but it’s a place for non-Muslims here to pay their respects.”

An official at the Ethiopian consulate told MBC that it costs SR 2,500 ($600) to bury an adult in the cemetery and SR 1,500 for a plot for a child. Historians say it contains are graves of Second World War soldiers in the cemetery, along with those of captains, consul generals and children. There are people of many faiths, including Hindus, Buddhists and Christians.

The attack on Wednesday, described as “cowardly and failed,” is thought to be the first targeting the cemetery. Residents who live close to it and know what it is understand it is a sacred site and respect its sanctity and the dead buried there, as if they were their own.

He added that the burial ground was also known as “the Christian Cemetery” and until now has been undisturbed and respected.

“It has a fence surrounding it and no one from outside the countries that run it is allowed to enter,” he said. “Urbanization extended to it and placed it in the heart of the city of Jeddah but it has always been left alone.”

An investigation is under way into the attack, which happened while foreign residents and dignitaries, including the French consul general, were holding a Remembrance Day ceremony to mark the 102nd anniversary of the end of the First World War. An employee of the Greek consulate and a Saudi security guard were injured in the blast.