Quran doesn’t tell people to fight any more than Gita, Bible, Torah. Why pick on Muslims

The offensive cartoons on Prophet Muhammad were projected on all government buildings in France. If this isn’t bullying the entire Muslim community, I don’t know what is. 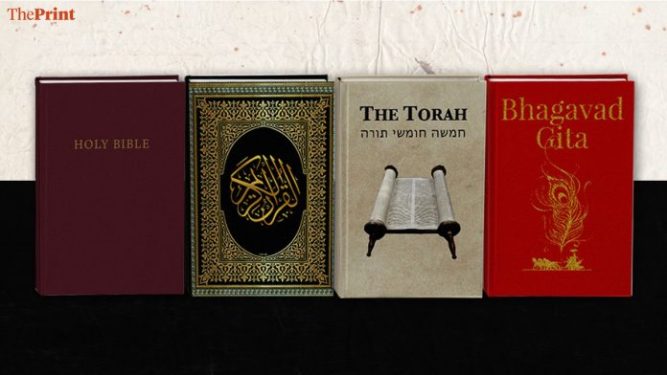 Charlie Hebdo-published caricatures of Prophet Muhammad and French President Emmanuel Macron’s endorsement of them have sparked protests all over the Muslim world. While the rest of the world says ‘the cartoons espouse freedom of expression’, Muslims are unequivocally denouncing this twisted version of freedom of expression where a deliberate attempt is being made to insult the Prophet for no reason whatsoever.

Did Prophet Muhammad ask the 18-year-old Chechen-origin Abdoullakh Anzorov to behead 47-year-old Samuel Paty, a teacher? No. Did he form Al-Qaeda? No. Was he flying the 9/11 planes? No. Did he hijack IC 814? No. Then why insult the Prophet? It is completely unnecessary and unprovoked. I am one of those Muslims who unequivocally protest against these cartoons and Macron for propagating such Islamophobic content.

The ‘crusade’ against Islam

When the two planes crashed into the World Trade Center twin towers on 11 September 2001, or 9/11 as it is known, it also crashed the old civilisational wars over land and economic sanctions and ushered the age of wars based on religious ideology. I personally felt ashamed for being a Muslim because the men who had carried out these attacks had done it in the name of Islam. That’s another thing that they had gone to a bar to drink a round of beers before crashing the planes in the “name of Islam”.

VDO.AI
The modern-day version of the crusades was back. And although the concept of terrorism existed long before terrorist outfits such as the Irish Republican Army (IRA), Ku Klux Klan (KKK), Liberation Tigers of Tamil Eelam (LTTE), etc. entered the scene, nothing caught the fascination of people like “Islamic terrorism”.

For the last 19 years, the world has been fixated on Islam and is busy debating how, according to popular opinion, the terrorism ushered by Islamic tenets are a menace to society.

But in these last 19 years, many Muslims, including myself, refuse to accept these “Islamic” acts of terrorism as belonging to us — as a community — or the religion we follow. And we refuse to be apologetic or responsible about it anymore. How a madman interprets the Quran does not make either the Muslim community as a whole or the religion we follow responsible for the act. If an obsessive lover kills for the “sake of love”, you don’t brand love to be in “crisis”, even though people have been killing in the name of love for centuries.

Today, France is front and centre in discussing Islamic terrorism thanks to its President who, at Samuel Paty’s funeral, spoke about Islam being “in crisis all over the world”. Paty was beheaded by Anzorov for showing to his students offensive cartoons of Prophet Muhammad published by Charlie Hebdo, which had unleashed terrorist attacks in France in 2015.

Macron spoke about how France will continue to make cartoons to stand strong on its values of liberty. And to really drive the point home, the offensive cartoons on Prophet Muhammad were projected on all government buildings in France.

If this isn’t bullying and deliberately provoking an entire community, I don’t know what is. Macron’s petty retaliation has sparked protests all over the world by Muslims who are utterly disgusted by the government of a liberal nation resorting to insulting a religion. Islam and the Muslim community as a whole have nothing to do with the beheading.

But whenever Muslims say this, verses from the Holy Quran are regurgitated by angry Islamophobes who call Islam a barbaric desert cult. It doesn’t matter to the haters that those verses have a context. They will have none of it.

Taking the verse out of context

Among several, there is one particular verse that is often used to brand Islam as a violent religion. In Verse 191 Chapter 2 of the Holy Quran, God says:

“And kill them wherever you encounter them and expel them from where they expelled you. Oppression is indeed worse than murder. Do not fight them at the Masjid Al-Haram (Ka’aba) unless they fight you therein. If they fight you, then kill them; such is the penalty of the disbelievers.”

But no one bothers to understand, even when told, that this verse was revealed when Muslims on the Hajj pilgrimage were attacked and killed by the Quraysh tribe who had signed a treaty with the Prophet to not attack the pilgrims.

The Quran has been revealed in parts over a period of 23 years to Prophet Muhammad. So, the verses are situational. Every chapter in the Quran mentions the location where the verse was sent to the Prophet. Also, the Quran is not compiled in a linear format. The same situation has been touched upon in an earlier chapter and part of it is anecdotally spoken about in a chapter much later because the Holy Quran isn’t a book of stories. It’s a book of lessons and morals.

No one mentions the verses that follow because then the Islamophobic agenda would be lost. In Verse 193 of Chapter 2, God says: “And fight them until there is no more oppression and the religion is for God, but if they cease, then no aggression is permitted except against the transgressors.”

How is this any different from Lord Krishna telling Arjun in the Bhagavad Gita to fight as his dharmic duty?

Also read: 5 reasons for the crisis in global Islam

From Gita to Bible to Torah
The Biblical Old Testament, too, tells believers to go to war.

Deuteronomy 20:1-4: “When you go out to war against your enemies, and see horses and chariots and an army larger than your own, you shall not be afraid of them, for the Lord your God is with you, who brought you up out of the land of Egypt. And when you draw near to the battle, the priest shall come forward and speak to the people and shall say to them, ‘Hear, O Israel, today you are drawing near for battle against your enemies: let not your heart faint. Do not fear or panic or be in dread of them, for the Lord your God is he who goes with you to fight for you against your enemies, to give you the victory’.”

Or how different is it from the Torah’s verses that speak of genocide and pillage?

Numbers 31:1-10 say: The LORD spoke to Moses, saying, “Avenge the Israelite people on the Midianites; then you shall be gathered to your kin.” Moses spoke to the people, saying, “Let men be picked out from among you for a campaign, and let them fall upon Midian to wreak the LORD’s vengeance on Midian. You shall dispatch on the campaign a thousand from every one of the tribes of Israel.” … “The Israelites took the women and children of the Midianites captive, and seized as booty all their beasts, all their herds, and all their wealth. And they destroyed by fire all the towns in which they were settled, and their encampments.”

Surely, the true followers of these religions will speak up against anyone seeking to use these verses out of context and painting their religion as violent?

But only Muslims are picked on and their beliefs targeted. We refuse to be apologetic about our religion. And we will protest democratically against these disgusting cartoons that further spread Islamophobia. Acts of terror cannot justify offensive cartoons as a symbol of liberty.

The author is a political observer and writer. Views are personal.