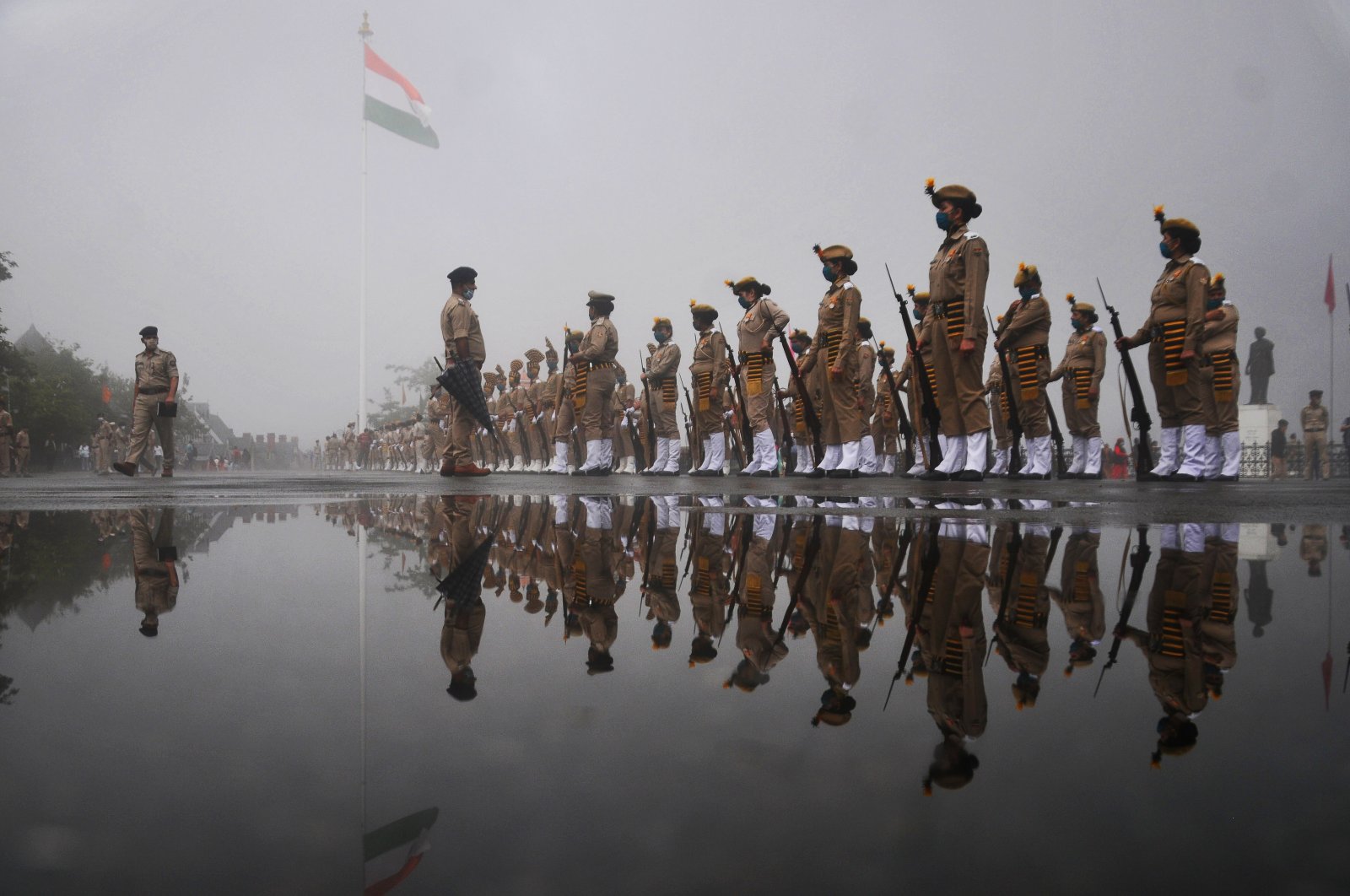 Indian police take part in a full dress rehearsal on the eve of the country’s 74th Independence Day, which marks the end of British colonial rule, in the province of Shimla, India, Aug. 14, 2020. (AFP Photo)

The BBC’s famous TV program “Big Questions” asked, “Should we be proud of the British Empire?” When taking into consideration developments in the South Asia region today, the question is fair to ask. A quick flashback to the British colonial intervention in the region may help us analyze the situation today.

Former British Foreign Secretary George Nathaniel Curzon had said “the (British) Empire was a supreme force for good in the world.” Certainly true, the Empire assured wealth, power and status to a handful of Indians that supported it. The very same Indians were bestowed with medals, certificates and land. Today, their descendants are kingmakers and hold all power corridors in South Asian societies.

Actually, the colonial enterprise has never been a good experience. In an article on Al Jazeera, Shashi Tharoor, an elected member of India’s parliament, wrote that “the British had been horrified, during the Revolt of 1857, to see Hindus and Muslims fight side by side and under each other’s command against the foreign oppressor.”

Tharoor detected that “divide et impera (divide and rule) had worked too well: a device meant to perpetuate British rule in India ensured a united India could not survive without the British. Two countries were what it would be.”

The East India Company is considered by some to be the most powerful corporation the world has ever known. Professor Huw Bowen, an expert on British colonial history, calls it a “money-making empire” that “stole $45 trillion from India.”

Shashi Tharoor’s book, “An Era of Darkness: The British Empire in India,” discloses details of a corporation that became an empire. Since then, nothing much has changed. A new East India Company has emerged in India and Pakistan. Read the publications of American journalist Elliot Wilson, American historian Stephen Kotkin, and “Poor Nation, Rich Army” by Taha Siddiqui, an award-winning Pakistani journalist.

Scottish historian William Dalrymple’s book “The Anarchy: The East India Company, Corporate Violence, and the Pillage of an Empire” and Indian writer Amaresh Misra’s “War of Civilisation India AD 1857: The Road to Delhi and the Long Revolution” document the viciousness of an East India Company that killed thousands of Muslim scholars, often strapping them to cannon fronts and blowing them to pieces. An untold holocaust …

Now, everything is more systematic, legalized and acceptable through laws, media advertising and public discourse so it would be hard to challenge the elites.

Swagato Ganguly, a senior editor at The Times of India, agreeably sums it up by saying that “while Pakistan’s military elite invokes the specter of the corrupt politician to stay in power, India’s neo-Brahmins scare us with the bogey of the bad businessman.” Well! Generals versus bureaucrats. That’s a brand new form of modern slavery coated with slogans and promises but encompasses the same old colonial interior that caters to the needs of a few privileged; the rest will live and die.

The new rulers invent and disseminate new discourses through media and advertising campaigns that their presence guarantees a nation’s survival. The same old strategy is in full-swing, ordinary people are reminded that our endurance is allied with following Western systems. That’s okay! But surprisingly, all the politicians, generals, peers and 24/7 TV anchors preaching this thesis have utterly failed to demonstrate to (innocent) South Asians that the British elite’s culture was designed to benefit the East India Company and that it has long been abolished in the U.K.

Today, the civil and military bureaucracy is enjoying the colonial era’s deluxe conveniences. I have lived and studied in the U.K. but I have never seen a British general, politician, bureaucrat, or media pundit receive commercial plots, massive agricultural land, post-retirement jobs, personal servants, or foreign hospital treatments. It happens only in the South Asian societies that are on the brink of economic failure, while Britain and Europe have abolished the batman tradition that still exists there. In fact, South Asians have invented some additional comforts alongside colonial luxuries in societies where beleaguered people often skip meals and many have no shelter. What a reprehensible veracity.

For a British premier, commuting to his or her office by train or bicycle is routine but for Indians and Pakistanis, protocols, motorcades and barricades are signs of power and privilege. Isn’t modern colonialism more damaging and costly? VIP culture is yet another sign of colonialism.

Praiseworthy, Britain has become a welfare state that offers quality education, health care, policing and a justice system. Both India and Pakistan have failed to provide basic necessities to millions of people. Obviously, equality and justice will end the elite’s hegemony.

Today the masses in South Asia are living with the same fear and oppression that they experienced under colonial rule. Is there any progress? Indian author Sankrant Sanu argued that the “colonial state fixed the people while (the) non-colonial state represents the people.”

Sanu provided an example of the police chief of the Indian city Faridabad, who said, “The people needed to be taught discipline.” Recently, a Pakistani police officer told a rape victim to avoid traveling alone at night. What a pity!

Anirban Mitra, a lecturer of economics at the University of Kent in the U.K., wrote that “historians agree that racist supremacy was, at least since the beginning of the 19th century, a defining feature of the angrez (English) mindset.” A candid view! In every institution across South Asian society structural racism not only exists but it continues to thrive, affirming a colonial attitude. Dalits, the lowest community of people in the caste system, are “untouchable” in India while Christians are “marginalized, relegated to dirty jobs and grim fates” in Pakistan. Often, Christian cleaners are called using a rather derogatory term, “Chooray.” Of course, it has nothing to do with the finest teachings of Islam.

It would be unfair to blame the English for the filthy caste system in South Asia. It existed in pre-British Raj times but they have further deteriorated it. Think of the Parliament of the United Kingdom that includes the House of Commons and the House of Lords. So what does it suggest? Think!

Let’s go back to South Asia where millions of common people’s life-goals are to build a small house and send their children to an ordinary school. Impossible! Because a handful of families have seized all avenues of wealth, power, and resources of South Asian societies. They are a superior-class created, nurtured and supported then and now by the colonial masters. Yeah, their descendants are the new bosses. In Australian journalist John Pilger’s words, “The New Rulers of the World.”

So how to rule the public? The best way is to manipulate and transform the public mind-set. Correct! Literature, education and the media are perfect tools to do it. Tim Allender, a professor at the University of Sydney, wrote a book titled “Ruling through Education: the Politics of Schooling in the Colonial Punjab” that is worth a read.

Late British historian Thomas Babington Macaulay in 1835 proposed that English education should be imparted in place of traditional Indian learning because the orient culture was “defective” and “unholy.” He believed in educating a selected group of people to “create a class of Indians who were Indians in color and blood but English in tastes, opinions, morals and intellect.” The wholesale idea was to establish a political hegemony and show the masses that only British rule could guarantee their survival.

Theoretically, educational reform is the best political product to sell during elections. Though, Indian and Pakistani elites inaudibly sanction the colonial educational system that was tailored to control the masses and prepare new rulers. In brief, a systematic way of brainwashing people so they “discard their own cultures and embrace Western cultures.”

Raja Masood, an associate professor of postcolonial literature and theory at the University of North Texas, illustrates this point using the language discourse on how children are still taught to write an application using words and phrases that endorse a colonial mentality such as “Yours obediently” or “Your obedient servant.” Think of the word “boss” commonly used in the Caribbean and Asian communities. How about the titles Maiam (Madam) and Saab (Sir)? At Leeds University, my English professor said don’t call me sir, call me Mike.

Nowadays, Indian and Pakistani elites and the judiciary and other government institutions communicate in English, a language that the majority cannot read or write. After all, the English language guarantees success and echoes a status symbol.

Obviously, the best education systems build enlightened individuals that can challenge the state and its wrongdoings. For a privileged class, chains of Engish educational institutions affiliated with British universities are operating in South Asian societies. In Pakistan for example, elite-class children enjoy Froebel’s, City, Beacon House and Roots, which are affiliated with British institutions while the underprivileged can either go to government-sponsored Urdu medium schools or they often end-up in an Islamic religious school called a madrassa. So what kind of nation will emerge in the future?

Atta-ur-Rehman, a British scientist of Pakistani origin specializing in organic chemistry, disclosed that education has never been a priority for the Pakistani elites, as they apportion the smallest sums for it in annual budgets. In addition, Anustup Nayak, vice president at XSEED Education, impugned the failure of the educational system for producing individuals “willing to die and kill for dead queens, scared animals, and caste history, all symbols of our past.”

The irony is that the educational system in India and Pakistan has failed to develop an intellectually rich, fair, or intertwined society. The outcome is a disunited, intolerant and violent society.

Both India and Pakistan badly treated their founding fathers, shattering the real ideas of India and Pakistan. A secular and an Islamic state that have both fallen into the hands of new colonialists. Let’s wait and see until how long it takes for both to survive colonialism.

*Academic, analyst and activist based in the U.K., Ph.D. holder at the University of Huddersfield