‘Mama Boko Haram’: one woman’s extraordinary mission to rescue ‘her boys’ from terrorism 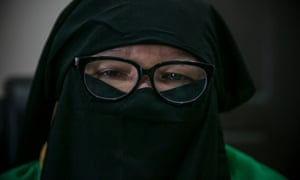 Aisha Wakil knew many of Boko Haram’s fighters as children. Now she uses those ties to broker peace deals, mediate hostage negotiations and convince militants to put down their weapons – but as the violence escalates, her task is becoming impossible. By Chika Oduah

It was another scorching afternoon in Maiduguri. In the west of the city, in Nigeria’s north-east, 51-year-old Aisha Wakil sat in her office talking to a jihadi fighter named Usman. Wakil was draped head-to-toe in fine sequinned chiffon; a niqab covered most of her face, leaving visible only her dark eyes. Ka’aji, a sweet, woody incense that Wakil kept burning in a corner, perfumed the room.

Wakil and Usman kept their voices down. They were hashing out a secret plan to free a 16-year-old girl who was being held hostage by Boko Haram. It was May 2019, 10 years after the Islamist group had begun terrorising Nigeria as part of a jihad it was waging against the government. The violence, which had spilled into neighbouring countries, had left more than 30,000 people dead.

Over the years, Boko Haram had become notorious for kidnapping women and girls. The most infamous instance came in 2014, when its fighters captured 276 schoolgirls from a secondary school in the remote village of Chibok. But there were abductions before Chibok, and dozens after. Some of those captured were forced to become suicide bombers, and Boko Haram has used more than 460 female suicide bombers, more than any other terrorist group in history. The teenage girl who Wakil and Usman were discussing was one of the group’s latest victims. For months, Wakil had been pleading with Boko Haram fighters to free her.