To delay justice is injustice: Rohingya crisis and Bangladesh’s burden 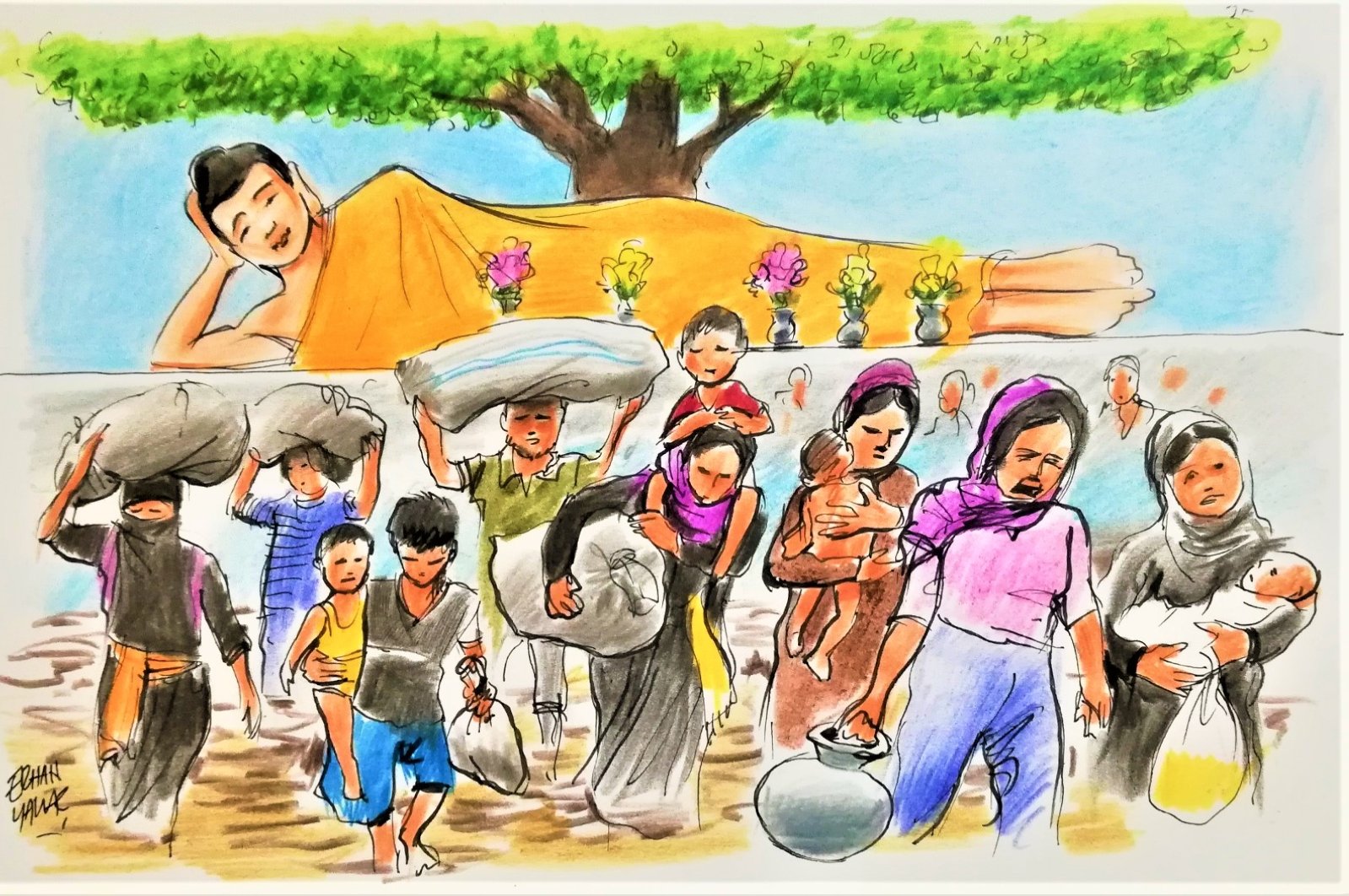 History states that the Rohingya represent a distinct ethnic community that has evolved over the centuries in the Rakhine state of Myanmar (formerly Burma). Once, the Rohingya were a predominant feature of socio-political life in the country, yet successive military governments in Myanmar have consistently carried out a well-crafted coordinated campaign of brutal persecution and the dehumanization of the community – presumably with a view to wiping it out entirely. Though the 1947 Constitution of Burma recognized their citizenship with the National Registration Certificate (NRC), a 1982 Citizenship Law practically rendered them foreigners in their own country. The NRC was replaced by a downgraded “white card” with curtailed rights and was subsequently invalidated in June 2015 to complete the disenfranchisement process. Unfortunately, the Rohingya are in the same situation under the civilian government, which is still utterly reluctant to even recognize their ethnic identity.

Systematic persecution with unmistakable signs of “genocidal intent” – including rape, murder and arson – since the late 1970s has triggered recurring exoduses of Rohingya into Bangladesh. There have been four major exoduses of the Rohingya to Bangladesh since 1978, yet the magnitude of the flight that took place in 2017 surpassed all previous records. Within two months, over 730,000 Rohingya had crossed over to Bangladesh with serious injuries, in a state of protracted starvation, fatigue and mental trauma.

The Bangladeshi government took the bold decision to give temporary shelter to this huge number of distressed people on humanitarian grounds, despite numerous challenges and constraints, particularly at a time when the situation of refugees and displaced people across the globe was worse than ever. During the recent incident of a boat of refugees having perilously drifted out to sea, it was also Bangladesh that came to the rescue of the Rohingya and provided them shelter and care to the best of its ability. Bangladesh is being forced to shoulder the entire burden of the Rohingya issue, which is beyond its capacity.

The international community, in general, has so far remained engrossed in the humanitarian aspect of the issue rather than the resolution of the prolonged crisis through sustainable repatriation. However, these distressed people are heavily reliant on the meaningful engagements of the world community in mitigating their plight. Increasing economic and political ties with Myanmar provided the international community with a huge opportunity and overwhelming leverage to help the distressed Rohingya realize their cherished ambition of being able to return to their homes free from fear. However, hopes for such an opportunity being taken have since soured.

The bordering country, Bangladesh, has undertaken a series of initiatives using its own resources to ensure the safety and optimize the well-being of these distressed people. Bangladesh’s efforts aim for the repatriation of displaced Rohingya to their ancestral homeland in Myanmar in safety and dignity. It would have been more encouraging to get the world community assertively vocal on severe restrictions of movement, health care, education, access to mobile and internet and livelihood opportunities in Rakhine – thereby fostering an environment conducive for voluntary repatriation.

The Rohingya crisis originated in Myanmar, and thus this is precisely where its ultimate resolution lies. Most importantly, the Rohingya are desperate to go back to their homeland at the earliest possible sign of being guaranteed their freedom to pursue a brighter future there. Further delay in repatriation may utterly frustrate the displaced Rohingya and entice them to fall prey to human trafficking, radicalization and other dangerous ventures. For the greater interest of this persecuted people and the stability of the region, the Rohingya crisis needs to be resolved in a durable manner with utmost priority.

Besides ensuring all humanitarian amenities for the Rohingya in Cox’s Bazar camps, Bangladesh has primarily banked on bilateral engagements with Myanmar and concluded three instruments with a view to commencing repatriation by Jan. 23, 2018, with an aim to complete it within the next two years. These instruments brought Myanmar under obligation to bring back normalcy in Rakhine, create an environment conducive for the repatriation of the Rohingya and encourage them to voluntarily return.

Previously, the Advisory Commission on Rakhine State (The Kofi Anan Commission) recommended that Myanmar take concrete steps to end the enforced segregation of Rakhine Buddhists and Rohingya Muslims; ensure full and unfettered humanitarian access throughout the state; tackle Rohingya statelessness by “revisiting” the 1982 Citizenship Law; hold perpetrators of human rights violations accountable and end restrictions on freedom of movement, among other recommendations.

Unfortunately, Myanmar has grossly failed to manifest any political will or take decisive measures in the last three years to fulfill its bilateral obligations or to effectively implement the KAC’s recommendations whatsoever. Rather, they have intensified campaigns to mislead the international community through falsification, misrepresentation of facts, unsubstantiated claims and unjustifiable blame on Bangladesh. As such, both repatriation efforts undertaken in November 2018 and August 2019 have proved futile. Despite their eagerness to return home at the earliest possible, none of the Rohingya have volunteered to go back given the prevailing situation on the apprehension of fresh persecution and a lack of measures by Myanmar to ensure them basic amenities and fundamental rights.

The progressive escalation of armed conflict in the country, both in intensity and geographic scope, remains a matter of serious concern. There have been regular reports of indiscriminate aerial bombing and heavy artillery shelling by Myanmar’s military in populated areas, causing widespread civilian casualties and large scale displacement. Myanmar has cleverly excluded Rakhine and Chin states from the purview of the cease-fire declared on May 9, 2020. The exclusion of “areas where terrorist groups recognized by the government take a position” from the cease-fire renders the announcement practically meaningless. Any mass displacement at this critical moment in the COVID-19 pandemic could lead to a further humanitarian crisis and destabilize the region.

It is well reported that about 130,000 Rohingya have been confined to open-air internally displaced persons (IDPs) detention camps since 2012. They are treated with severe restrictions on free movement, essential health care, basic education, livelihood opportunities and access to mobiles and the internet. Thus, during the COVID-19 outbreak, some humanitarian aid groups have urged the Myanmar government to oblige international human rights law to ensure equal access to essential health care, regardless of ethnicity, religion or citizenship status; end restrictions on movement; and permit aid groups the kind of unfettered access needed for a rapid, substantive response to the virus.

Against a backdrop of mounting global calls against the culture of impunity before the law displayed by Myanmar, the international community has initiated a number of measures to hold the perpetrators to account. But it has already become evident that such initiatives, including the “Provisional Measures” by the International court of Justice (ICJ) on Genocide case by Gambia has failed to bring about any positive change in Myanmar’s mindset, policies or approach. In less than three years, the Myanmar military is again being accused of atrocities. Though the victim this time is different, the gravity and pattern of violence remain the same.

A lack of consensus and coordinated response on the part of the international community in relation to finding a durable solution to the Rohingya crisis has further emboldened Myanmar to pursue its abusive policies vis-a-vis the country’s minorities, particularly the Rohingya. It is sad to see that ethics and universal values have given way to shallow national self-interests. While some countries have come forward to extend unconditional support to Myanmar at international fora, many others continue to vie for deeper economic ties with Myanmar, ignoring the country’s horrific track record in fulfilling universal norms and obligations. There is nothing wrong in fostering ties for mutual benefits; however, the question remains as to whether we can afford to abandon all universal values and norms to that end. The maxim of Napoleon thus still remains relevant: “The world suffers a lot. Not because of the violence of bad people. But because of the silence of good people.”

It may be recalled that the U.N. Independent International Fact-Finding Mission (IIFFM) had urged the U.N. Security Council and governments to immediately impose targeted sanctions against companies run by the Tatmadaw (Myanmar armed forces) and warned that doing business with Tatmadaw companies could be complicit in international crimes. Yet, it is surprising to note that Myanmar’s exports have increased by 53% since the Rohingya persecutions of 2017. This is because Myanmar’s trade with leading Western economies has skyrocketed, some by 11 times. On the other hand, foreign direct investment in Myanmar has increased 43%, if compared between the timeframe of 2011-2015 and 2016-19, with major contributions from major far eastern economies and ASEAN countries, it appears that atrocities and persecutions of a minor ethnic community have turned into a boon for Myanmar’s economy. Continued atrocities, a dismantling of labor rights and other forms of discrimination and abuse appear to have not stopped Myanmar from enjoying preferential treatment in trade, investment and development assistance.

As a least developed country (LDC), Myanmar benefits from the most favorable regime available under the European Union’s Generalized Scheme of Preferences (GSP), namely the Everything But Arms (EBA) scheme. The GSP, under the EBA, grants unilateral duty-free, quota-free access for all exports (including RMG), except arms and ammunition to the EU. The GSP Regulation provides that trade preferences may be suspended in case of “serious and systematic violation of principles” laid down in the human rights and labor rights conventions listed in Annex 8 of the Regulation. In response to the deterioration of the human rights situation in Myanmar, the EU once threatened to withdraw the trade preferences that ensure the country has duty-free access to the EU common market. However, there has since been a mysterious silence from the EU.

Nobody, including the most ardent proponents of human rights, seems to be troubled by the Tatmadaw’s role in the massacre of Rohingyas or their gross violations of international law and universal norms. The track record of Myanmar’s armed forces in mass atrocities and grave crimes committed against ethnic and religious minorities have not prevented their engagement in deeper defense cooperation with the so-called civilized world and acquiring modern weapons like fighter jets, armored fighting vehicles, warships, missiles, missile launchers and submarines. The shocking indifference of influential countries and the pathetic reluctance of the international community to act in a decisive manner has created an all-permissive environment for Myanmar that enables the armed forces to defy the world. Myanmar has been taking advantage of the appalling weakness of the international community to escape the consequences of the crimes committed in Rakhine State.

Has the world community forgotten the words of Sir William Penn: “To delay Justice is Injustice”?

Is not the silence of the world community in Rohingya crisis resolution through sustainable repatriation another injustice ongoing for humanity? Of course, it is.

It is time we ask how long Bangladesh should be left alone in the wilderness to resolve the protracted Rohingya crisis? A silver lining of optimism blinking out of the International Court of Justice and International Criminal Court has cast the hopes of the heartbroken Rohingya that the Tatmadaw will be brought under justice out to sea. Still, the Rohingya are bubbling to ask the international community: When can we go back and live a decent life in our homeland with safety, security and dignity.