Bigamy is no longer a felony in Utah 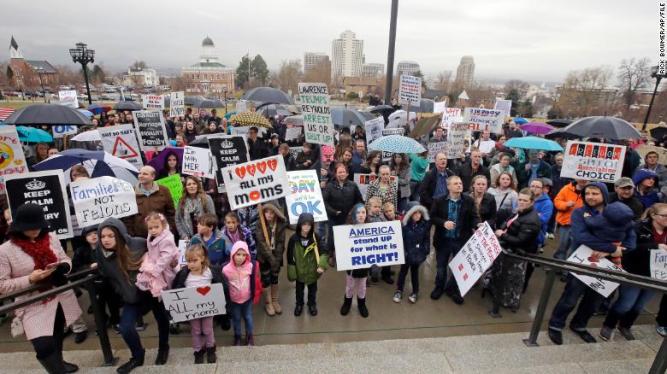 A group of pro-polygamy protesters rally at the Utah state Capitol on February 10, 2017.  These are the same debates as the Shariah Law or about secularism

(CNN) A law effectively decriminalizing bigamy, when two people marry while at least one of them is already legally married, is now in effect in Utah.

For decades, bigamy was a third-degree felony, legally punishable by up to five years in prison and up to a $5,000 fine. The new law makes it an infraction, putting the offense on par with getting a traffic ticket.

The bill was signed into law by Gov. Gary Herbert in March and took effect on Tuesday.

Polygamy has been practiced in Utah by certain religious groups since before it became a state and continues to persist to this day.

Though the practice has long been illegal under state and federal law, the Utah attorney general’s office has declined to prosecute the offense, except when it’s committed along with other crimes.

The new law makes the attorney general’s policy official. Supporters of the law say that reducing the penalty for bigamy removes barriers that previously prevented potential abuse victims from coming forward for fear of prosecution.

Polygamy in Islam: What It Means?

Why does Islam allow polygamy?

The sunnah of monogamy