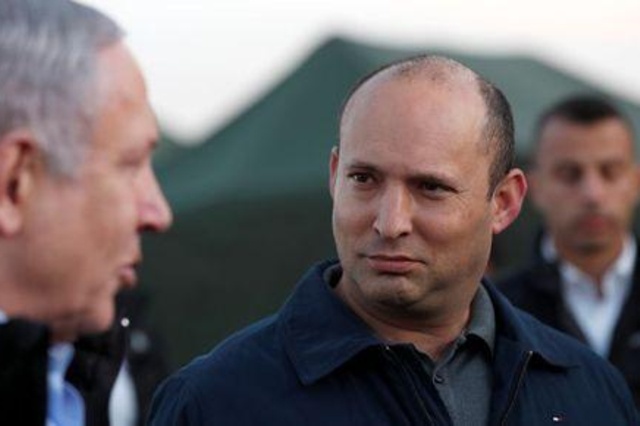 By Stephen Farrell and Ari Rabinovitch

The remarks by Naftali Bennett, a coalition partner in Prime Minister Benjamin Netanyahu’s rightist government, led Palestinians to say Trump’s plan had given the green light for Israel to formally annex its Jewish settlements in the West Bank occupied by Israel since the 1967 Middle East War.

Trump’s plan envisages a two-state solution with Israel and a future Palestinian state living alongside each other, but with strict conditions that Palestinians have baulked at.
He proposed a four-year schedule for the creation of a Palestinian state, with Palestinians first having to agree to halt attacks by the Islamist militant Hamas movement which controls the enclave of Gaza.

Jerusalem would be the undivided capital of Israel, it said.

With Netanyahu still outside Israel after attending the plan’s presentation in Washington, Bennett outlined his hardline interpretation of what the White House had offered Israel.
“Last night history knocked on the door of our home and gave us a one-time opportunity to apply Israeli law on all settlements in Samaria, Judea, the Jordan Valley and the northern Dead Sea,” Bennett said, using the Hebrew names for areas in the West Bank occupied by Israel.

He had ordered a team to be set up to apply Israeli law and sovereignty on all Jewish settlements in the West Bank.

It was unclear whether the present caretaker government had a legal mandate to carry out such a move after two inconclusive elections in 2019. Bennett is vying with Netanyahu for support from right-wing voters in an election set for March 2.

Netanyahu on Wednesday reiterated his support for Trump’s plan, telling Fox television: “We will not contradict in any way the outline that the president put forward.”

But Amir Peretz, head of Israel’s leftist Labour Party, said no unilateral plan could work. “Now more than ever it’s clear that we need a diplomatic compass,” he said.

Israel’s military issued a statement saying that based on an assessment of the situation, it was reinforcing divisions for the West Bank and Gaza with additional combat troops.

‘SLAP OF THE CENTURY’

Palestinian President Mahmoud Abbas called Trump’s plan the “slap of the century” after it was announced.

“It’s about annexation, it’s about apartheid,” he said in Ramallah in the West Bank. “Moving to the de jure annexation of settlements is something that was given the green light yesterday.”

Israel rejects any comparison of its policies on the Palestinians to South Africa under apartheid rule.

Palestinians also dismissed the proposal for a capital in Abu Dis, in the West Bank just outside the Israeli municipal borders of Jerusalem. It lies a mile east of the historic walled Old City, home to sites sacred to Judaism, Christianity and Islam but cut off by an Israeli wall and checkpoints.

Palestinian leaders believe the Trump administration is biased towards Israel.

It already had broken with international consensus by recognising Jerusalem as Israel’s capital, halted aid to the Palestinians, and said it no longer considered the settlements a breach of international law.

“We’re not going to chase the Palestinians…the Palestinian leadership, you can’t really treat them like they’re a serious government, or capable or competent dealmakers,” he told reporters. “They’ll do what they’ve always done, which is screw everything up.”

The Palestinians could push for a U.N. condemnation of the plan. Israel’s U.N. mission signalled on Tuesday it would work to thwart this in a diplomatic campaign with the United States.

Gaza political analyst Talal Okal said the deal gave Israel the right to take what it wanted “immediately, while the Palestinians have to wait four years to see whether they have rights or not”.

Amos Yadlin, a former Israeli head of military intelligence said: “This is the most favorable plan for Israel ever presented by an international player.”

However he said that because it included mention of a two-state solution, it could still cause problems for Netanyahu among his right-wing allies.

Bennett seemed to confirm this, saying: “The Israeli government will not recognise a Palestinian state.”

(Additional reporting by Ali Sawafta in Ramallah, Nidal al-Mughrabi in Gaza and Ari Rabinovitch and Rami Ayyub in Jerusalem and Michelle Nichols in New York, Editing by Angus MacSwan and Howard Goller)