Three journalists from South Asia share their experiences of covering stories that make uncomfortable reading for many of their compatriots.

Sarah Eleazar from Pakistan, Aditya Adhikari from Nepal and Rohini Mohan from India were recently invited to Switzerland’s capital because their stories were among the 39 of 924 submissions nominated for the True Story Award
external link

. It was the world’s first global journalism prize, given in Bern as part of the Reportagen Festival
external link

. The goal of the prize is “to supplement and broaden the predominantly Western view of the world with other perspectives”, according to its organisers.

While in Bern, the three journalists shared what it’s like to work on such difficult – and sometimes dangerous – subjects.

Journalist Sarah Eleazar’s article “The Anatomy of a Political Movement

” covers an emerging protest movement in the former federally administered tribal areas (FATA) in northwestern Pakistan. The Pashtun Tahafuz Movement (PTM) openly citicises the Pakistani army and blames it for extrajudicial killings and enforced disappearances carried out under the name of the country’s domestic war on terror.

“The ones responsible for terrorism are the ones in uniform,” was the rallying cry of protesters at a demonstration in Lahore in April 2018. Eleazar’s coverage of the rally aimed to portray the challenges of holding the powerful army to account.

swissinfo.ch: Why is criticism of the army an uncomfortable subject in Pakistan?
Sarah Eleazar: Pakistan is a hyper-nationalist country. You need hyper-nationalism to legitimise the presence of such a huge army and military operations within the country. Thousands of people have been killed on both sides, but for what? The Taliban is back and a lot of it has to do with the deal made in Kabul. What was the war on terror for, then?
swissinfo.ch: Why did you choose to cover the Pashtun Tahafuz Movement?

Sarah Eleazar: The PTM was challenging the established state narrative on the war on terror. They were talking about the problems people were facing in the region because of the way the war on terror was fought there. What they are saying is a bitter pill for the state to swallow.

Everyone agrees the FATA was turned into a breeding ground for militants to fight against the Soviets in Afghanistan in the 1980s. PTM uses social media to share video and photo evidence that the army has protected the Taliban in many places.

(Sarah Eleazar)
swissinfo.ch: What are the risks of covering such a movement?

Sarah Eleazar: The metaphoric use of the word terrorism to describe the extraordinary measures adopted to fight the war on terror are not acceptable to the state. The military has lost a lot of soldiers in the war against terrorism and it is a blow to their morale to see such a massive movement emerge and hold them responsible for loss of rights in their areas.

In the last few weeks, several journalists have been arrested for reporting on the PTM. It is dangerous to talk about them on social media as everyone is tracked.

We saw the state repression happening in front of our own eyes while covering the PTM rally in Lahore. The police went to the hotels where protesters were staying and picked them up. All this was being shared on Facebook live by PTM supporters.

swissinfo.ch: How was your story received in Pakistan?
Sarah Eleazar: The article was shared primarily by people sympathetic to the PTM but it didn’t get much attention otherwise. Few people read longform articles in Pakistan.

As a journalist I have faced online threats and harassment but for some reason this story did not generate a lot of backlash. I think it is because the state does not want to engage with such an article as it would draw attention and make everyone want to read it. 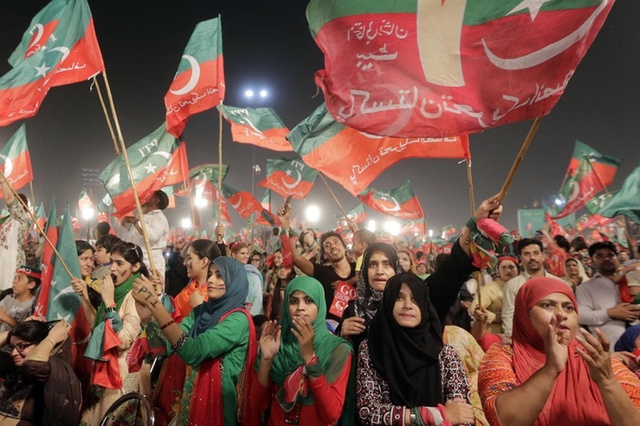 Supporters at a PTM rally in Swat in April 2018.