The Rise of a Moderate (and Persecuted) Islamic Caliphate 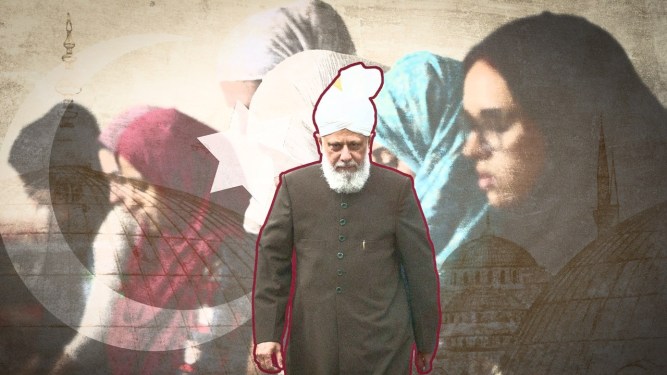 The Ahmadiyya movement is growing faster than any other strand of Islam.

Half a mile from South London’s busy Morden station is the vast complex of Baitul Futuh Mosque, the largest Islamic place of worship in Europe. But the $19 million in donations that went into building the mosque didn’t come from the Sunni or Shia communities that are the largest branches of Islam. Instead, it came from the Ahmadiyya, one of the most persecuted sects of the religion and one that is now emerging as the fastest-growing major strand of Islam.

Founded only in 1889, the relatively new sect that was born in India and is today headquartered in London isn’t recognized as a part of Islam by many traditional Muslims, or by the world’s two largest Muslim-majority nations, Indonesia and Pakistan. But it’s quietly spreading faster than its older cousins, building a new network of Muslim missionaries who are winning over followers of other branches of Islam and people from outside the religion.

Just in 2018, the Ahmadiyya community established 180 new mission offices in 127 countries and built 198 new mosques. An even larger number — 213 — of preexisting mosques belonging to other sects shifted loyalties to the sect in 2018. The number of new members entering the Ahmadiyya fold is increasing each year — the community gained 647,000 new Ahmadis from 129 countries in 2018, compared with 550,000 in 2014, according to data from the headquarters in London.

In all, since 2014, the community has globally gained 2.4 million followers — more than the increase in the population of the U.K. and France in that period. That increase represents, at the minimum, a 13.5 percent growth in the Ahmadiyya population, which today is estimated to be as large as 20 million strong. By comparison, the estimated annual growth rate for the Shia sect is 1.6 percent and for Sunni Muslims is 1.7 percent — and a 2011 Pew study showed growth rates are dropping for both.

Unlike traditional Islamic beliefs, the Ahmadiyya sect believes that the Messiah has already come in the person of Mirza Ghulam Ahmad, who founded the movement and whose aide Hakeem Noor-ud-Din is considered the sect’s first caliph. But while that has made them targets of murders and attacks on their mosques, another point of divergence from more mainstream sects is helping them spread. The Ahmadiyya follow a model of international proselytization more common with Christian missionaries than with Shia or Sunni clerics. There are more and more imams graduating from the sect’s Missionary Training College, a seven-year period of schooling that also asks students to take on charitable work in another country. Over the past two years, 416 missionaries have graduated from the college, which had only two branches — in India and Pakistan — until 2017. But in the past year, they’ve opened branches in 11 more countries.

That emphasis on charitable work — from street cleaning in the U.K. to disaster relief after the Houston floods — to grow their influence marks the sect as different from other more conservative streams of Islam that, in West Africa, for instance, are spreading through Arab-funded mosques and religious schools, says Gambian Ahmadiyya imam Abdullah Dibba.

And while the Ahmadiyya are also building mosques and offices in countries where they’re growing, there are no known charges of members of the community spurring radicalism anywhere. The community’s schools promote secular education. The community’s current caliph, Mirza Masroor Ahmad, routinely condemns all acts of terrorism. That track record, attractive both for people seeking a more moderate Islam to follow and for governments that host the community, is part of a conscious ploy to steer clear from politics, say clerics.

The sect is growing fastest in Africa — and West Africa in particular. More than 120 of the new mosques that came up in 2018 are in Niger alone. Ghana has an estimated 500,000 Ahmadi Muslims, according to the 2017 book The Ahmadiyya in the Gold Coast, by Indiana University Bloomington history professor John H. Hanson. Sierra Leone, where Clarke has worked as a missionary, has a 700,000-strong Ahmadiyya community out of a total population of 7 million.
That isn’t entirely surprising: Islam as a whole is growing fastest in Africa, with the fraction of Muslims living in sub-Saharan Africa expected to go up from 16 percent to 27 percent between 2015 and 2060, according to a Pew study. But the spread of the Ahmadiyya movement isn’t just because of natural growth in numbers — and it isn’t only physical proselytization they’re relying on. The community has a TV network called MTA International, consisting of four channels — the latest, MTA Africa, was launched in 2016 — that broadcast sermons, prayers, news, cultural programs and talk shows to a global audience.

Imams back that soft TV messaging with hard charitable work on the ground, with foreign Ahmadiyya clerics and volunteers playing a key role in those services, says Dibba, who first joined religious education at the age of 18. Gambians, he says, recognize that there are people coming from different parts of the world, on a voluntary basis, “to live with them, dine with them, travel with them and essentially be brothers standing shoulder to shoulder, crying with them.”

For sure, the community’s expansion faces challenges, especially in Pakistan, home to between 2 and 5 million Ahmadis. There, followers must sign a declaration denouncing the Ahmadiyya Muslim prophet before they can get a passport or ID card. Pakistani law describes them as non-Muslims. More than 90 Ahmadis were killed in attacks on two community mosques in Lahore in 2010. As recently as May 2018, a mob demolished an Ahmadiyya mosque. Pakistan Prime Minister Imran Khan retracted his announcement of Princeton economist Atif Mian, who is Ahmadi, as his finance minister last September after criticism from Sunni leaders. “The status quo of decades-long legal discrimination and everyday bigotry remains intact,” says Rabia Mehmood, Pakistan and South Asia researcher at Amnesty International.

But comparatively, the Ahmadiyya community in West Africa — despite discrimination from mainstream Muslim sects — has faced far less persecution, especially from governments, say experts, making the region attractive for the movement’s expansion. Niger, for instance, has been relatively peaceful over the last 30 or 40 years, when it comes to interreligious tensions, says Adeline Masquelier, a professor of anthropology at the Aarhus Institute of Advanced Studies.

Ironically, the only other Muslim movement that today prescribes to the idea of a caliphate is the Islamic State, which recently lost its last stronghold in Syria. But the Ahmadiyya sect couldn’t be more different from the extremist group that first gained notoriety through videotaped beheadings. Clarke credits the Ahmadiyya movement’s caliphs for the sect’s staunch position against extremism. “We haven’t had a single person radicalized, thank God,” he says.

The movement’s apolitical nature means most governments don’t see the Ahmadiyya sect’s practices as a threat to their rule — unlike more militant groups that can galvanize violent mass action. All of which is why, while a particularly brutal Islamic caliphate appears to be on its way out, another more moderate version is on the rise.