Opinion Rendition: The Guardian view on rendition and torture: a shame that Britain cannot erase

Boris Johnson’s decision to discontinue a necessary inquiry is immoral, and against the national interest too 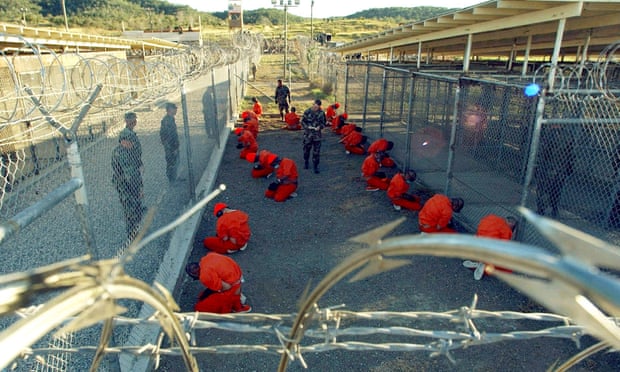 The parliamentary intelligence and security committee found UK intelligence agencies to be complicit in hundreds of incidents of torture and rendition, mainly in partnership with the US in Iraq, Afghanistan and Guantánamo Bay (pictured). Photograph: HANDOUT/Reuters

Anew prime minister, from the same party as his predecessors, cannot exactly wipe the slate clean. But the transition does at least allow the government to take out some of the more odiferous trash, as the flurry of statements and releases in the days before Theresa May’s departure and Boris Johnson’s arrival indicated.

One of the most serious of these was barely noticed in the general bustle. It marks a betrayal of a pledge to investigate UK complicity in rendition and torture that was made, not from an abstract commitment to evaluate Britain’s role in post-9/11 counter-terrorism operations, but from an understanding that a failure to face up to it – and prevent a repetition – would ultimately damage British interests.

“The longer these questions remain unanswered, the bigger will grow the stain on our reputation as a country that believes in freedom, fairness and human rights,” said Britain’s then prime minister, David Cameron, when he announced a speedy, judge-led inquiry. Yet nine years on, we have only partial answers, and now the government has decided that we will not get any more.

The initial inquiry was cut short due to criminal investigations – though what it turned up, despite its limitations, was shameful enough. Instead of reopening it, the government punted the issue to the parliamentary intelligence and security committee, which it had previously deemed unsuited to the task. The ISC’s chair, Dominic Grieve, described “inexcusable” actions. The committee found UK intelligence agencies to be complicit in hundreds of incidents of torture and rendition, mainly in partnership with the US in Iraq, Afghanistan and Guantánamo Bay. Britain planned, agreed or financed 31 rendition operations. British intelligence officers consented to or witnessed the use of torture on 15 occasions. On 232 occasions the intelligence agencies supplied questions to be put to detainees whom they knew or suspected were being mistreated.

Yet the inquiry was conducted under such tight restrictions, including the inability to call key witnesses from MI5 and MI6, that the committee itself stressed that its report was not a full account. The government promised to consider a judge-led inquiry and respond within two months. Now, a full year on, it has said no.

Earlier this year it emerged that the government spent more than £11m resisting demands for an apology, compensation and prosecutions over MI6’s 2004 rendition of the Libyan dissident Abdel Hakim Belhaj and his wife, Fatima Boudchar. The case eventually ended when Theresa May delivered an unprecedented apology. As the former shadow home secretary David Davis warned, this is not just a historical matter. The new guidance being issued to ministers does not say explicitly that they cannot lawfully authorise action that they know or believe would result in torture – despite the urgings of the ISC, which has pointed out that “dangerous ambiguities” left ministers with entirely different understandings of what they could and could not do.

The government’s decision is not only a moral failure. Mr Davis has said it is clear a judicial review will be sought.

Refusing an inquiry and producing unsatisfactory guidance has not drawn a line under this issue. It has merely drawn it out – while the deserved stain on Britain’s reputation grows.