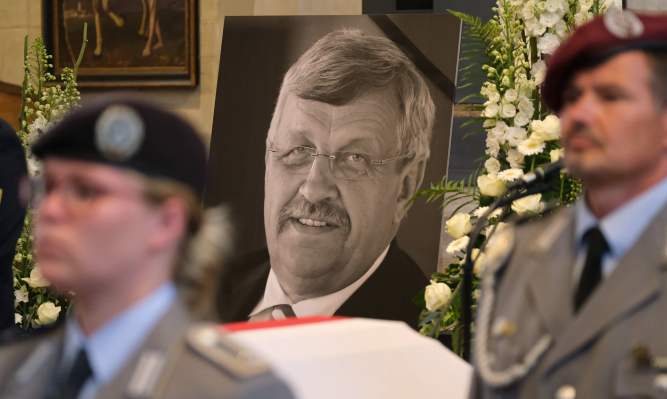 Walter Lübcke, a member of Angela Merkel’s CDU, was shot dead on the terrace of his home. Photograph: Sean Gallup/Getty Images

If two employees of a kebab shop had not come to the rescue of Andreas Hollstein on the night of 27 November 2017, the mayor of the town of Altena would most likely have become the first German politician to be murdered by a rightwing extremist since the end of the Nazi era.

Instead, the 57-year-old survived with a stab wound to his neck, inflicted with a 34cm (13in) knife by a local man angered by the mayor’s liberal stance during the refugee crisis.

Nineteen months later, another regional politician was less lucky. Walter Lübcke, a member of Angela Merkel’s CDU, was killed with a gunshot to the head on the terrace of his home near Kassel, in the state of Hesse. Neo-Nazi Stephan Ernst has confessed to killing the regional official in an attempt to take “revenge” for his pro-refugee stance.

One month on from the murder, Hollstein told the Guardian that politicians and authorities in Germany needed to act urgently to protect public servants in rural areas from similar attacks – and to ensure that young people did not avoid politics for fear of risking their lives.
“What we are witnessing is a massive loss of respect for people in public office – not just politicians, but also civil servants, police officers, firefighters, ambulance drivers,” said Hollstein, who said he had received four further death threats since Lübcke’s murder.

Hollstein refused police protection and declined to have his contact details removed from the town hall website, arguing that politicians in less densely populated areas had to remain in close contact with the public. “There is no point in a local politician who is no longer accessible to the citizens he or she represents,” he said. But that leaves such politicians particularly vulnerable.

“I think the very first thing we should expect from politicians after the Lübcke murder is stronger instinct to self-regulate their own speeches,” he said.