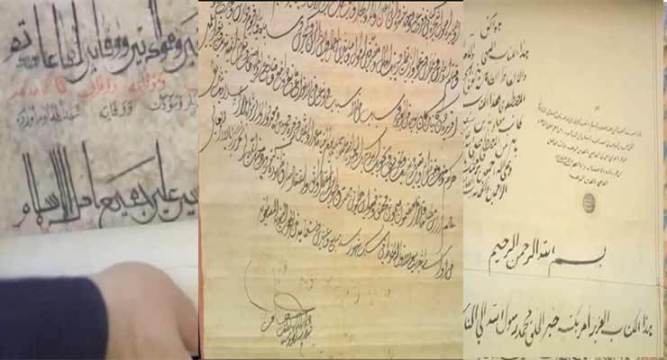 The Muslim Times has the best collection of articles for interfaith tolerance and about the prophet Muhammad, may peace be on him. Suggested reading: Book Review: The Covenants of the Prophet Muhammad with the Christians of the World

For many years, I have heard that there had been written communication between the Prophet Muhammad and the Armenian Patriarchate of Jerusalem, but I had not seen any of the documents to that effect.

Two months ago, I read a fascinating article published in the Armenian newspaper Aztag in Beirut, Lebanon, by Dr. Garbis Harboyan of Montreal, Canada, who had uncovered the details of the communication between Prophet Muhammad and the then Armenian Patriarch of Jerusalem and their successors.

Dr. Harboyan mentioned his sources as: Gregory Krikorian’s, “Through the eye of an Armenian needle,” published by the Armenian Catholicosate of Cilicia in 2002. Krikorian had stated that his book was the summary and English translation of “History of Jerusalem,” a two-volume, 1385-page book by Dikran Sayalanians, published by the Armenian Patriarchate of Jerusalem in 1931. Dr. Harboyan also mentioned that he had recently seen the book, “Armenian Art Treasures of Jerusalem,” by Bezalel Narkiss, Michael E. Stone, and Avedis Sanjian, published in New York, in 1979, which included a copy of Prophet Muhammad’s decree to the Armenian Patriarchate.

The Armenian Patriarchate was established in Jerusalem almost 2,000 years ago. Many Armenians had gone on pilgrimage to Jerusalem after converting to Christianity in 301 AD. They had built a part of Sourp Hagop Convent in 420 AD. By the sixth Century, Armenians had constructed 66 religious institutions in Jerusalem.

In 626 AD, the Armenian Patriarch Apraham of Jerusalem, seeing the looming dangers of Islamic expansion and conquest, went to the Holy Islamic city of Mecca with a delegation of 40 prominent Armenians to meet with Prophet Muhammad to secure his protection.

Dr. Harboyan reported that the Prophet had welcomed the Armenian guests with affection, respect, and kindness, and listened to Patriarch Apraham’s suggestions. The Armenian delegation expressed its submission to the Prophet, readiness to cooperate with him, and sought his protection.

At the end of the meeting, Prophet Muhammad issued an decree which stated: “I, Muhammad, the son of Abdallah, prophet and servant of God, I pay my respect to Patriarch Apraham, I honor him and all archbishops, bishops, and priests in Jerusalem, Damascus, and Arab regions, in other words, those people who are subject to Jerusalem, such as Ethiopians, Copts, and Assyrians. I recognize and guarantee their monasteries, churches, educational centers, properties and lands. I, Prophet Muhammad, with the witness of God, and the 30 people around me, I grant my patronage and protection, and I dispense my mercy to the Armenian churches, wherever they may be, throughout Jerusalem, the Holy Tomb of Christ, Sourp Hagop Church, Bethlehem Church, all prayer houses, monasteries, Golgotha road, and the holy sites. I also secure and ensure that my protection also extends to Christian hills, valleys and Christian income-generating institutions. I declare all of this in my name as Prophet and in the name of my Muslim faithful.”

The Prophet Muhammad instructed his successors to respect his decree and execute it in all of its details. Present at that meeting was Omar the son of Khattab who became one of the Prophet’s successors and issued a similar decree confirming the Prophet’s decree.

When Omar took over as Khalif in 634 AD, he appointed Abu Obeid as the head of the army. Abu Obeid’s forces attacked Damascus and Jerusalem. The Greek Patriarch Sophronius and Armenian Patriarch Krikor met with Abu Obeid and informed him that occupying Jerusalem would enrage God, because Jerusalem is a holy city. Abu Obeid reported to Khalif Omar about his meeting with the two Patriarchs. Omar personally came to Jerusalem. The brother of the Greek Patriarch met with Omar and reminded him about the decree of Prophet Muhammad. Omar then issued his own decree and confirmed the Prophet’s decree. Omar entered Jerusalem with his followers, visited the religious sites, and suggested building a Mosque in a plot of land next to the church of Christ’s tomb. The Mosque was built in 935 AD and named “Al Omariye.” Omar allowed freedom for Christian worship, but forbade the ringing of church bells.

Omar was succeeded by Khalif Ali who also issued a decree for Armenians in Jerusalem, confirming the previous decrees by the Prophet and Omar.

In 1097 AD, the Crusaders invaded and liberated Jerusalem. In 1187 AD, Salahuddin al Ayoubi who is Kurdish and his family originated from Dvin in Armenia, occupied Jerusalem and expelled the majority of 100,000 Christians from the city. He took over all the Latin churches in Jerusalem and forbade church services. However, he granted Armenians partial freedom.

Armenian Patriarch Apraham with a group of his clergy met with Salahuddin and showed him Prophet Muhammad’s decree. Salahuddin then issued his own decree and confirmed the decrees issued by the Prophet and Khalifs Omar and Ali. Salahuddin particularly noted in his decree Armenians’ jurisdiction over churches, holy places, Sourp Hagop Convent, churches of Bethlehem and Nablus, the Holy Tomb, other holy sites, and especially Armenians’ freedom to worship. He also lowered the taxes on Armenian merchants and pilgrims.

In 1517 AD, Ottoman Sultan Selim occupied Jerusalem and issued his decree which confirmed the privileges bestowed upon the Armenian Patriarchate of Jerusalem by Prophet Muhammad, Khalif Omar, and Salahuddin. Sultan Selim’s successor, Sultan Suleiman, issued his own decree reconfirming the Armenian rights in Jerusalem. Subsequent Sultans also issued decrees, such as Mehmed IV in 1659 AD, Sultan Mahmud I in 1735 AD, and Sultan Abdulmejid I in 1853 AD.

The Prophet Muhammad’s decree, besides being a valuable historical document, indicates that Armenian Christians and Muslims have enjoyed the most cordial relations from the ancient times to the present. Armenians need to publicize the Prophet’s crucial decree as well as those of his successors to counter the anti-Armenian propaganda spread by Turkey and Azerbaijan in the Islamic world.