The First Global Terrorists Were Anarchists in the 1890s

CAMBRIDGE, Mass. — It was past dark on a February afternoon in 1894 when a keeper at Greenwich Park, just outside London, heard the bang. Rushing toward the spot, he made out the figure of a young man on bent knees, with his abdomen gashed open and his bowels spilling out. The police identified the victim as a Frenchman named Martial Bourdin, with ties to a well-known anarchist club. Clearly, they concluded, he’d been on his way to bomb the Greenwich Observatory. It was a highly symbolic target: the Prime Meridian, the longitudinal center of the world.

Bourdin did rock the center of the world, just not the way he may have intended: Anarchism in the 1890s touched off the first age of global terrorism, and then as now, migrants and civil liberties paid the price.

Today, “anarchism” seems harmless, almost quaint, something you might associate with ex-hippies, former punks and wild-haired loners scrawling anti-establishment manifestos in cabins off the grid. But in its heyday, anarchism promoted a broadly appealing vision of a free, stateless society. Delegates at the International Anarchist Congress in 1881 adopted the strategy of “propaganda by deed” — in a word, terrorism — to achieve it.

A single attack could “make more propaganda than thousands of pamphlets,” said the anarchist philosopher Peter Kropotkin, and anarchists carried out dozens. They committed a string of high-profile assassinations the likes of which seem unimaginable today, killing the U.S. president, the French president, the Spanish prime minister, the king of Italy and the empress of Austria-Hungary in less than a decade.

More shocking were the bombs. Armed with newly patented dynamite, the first widely available weapon of mass destruction, anarchists transformed sites of bourgeois sociability — a bustling Paris café, a piazza in Rome, the opera house in Barcelona — into screaming scenes of murder.

Legislatures across Europe and the United States reacted by ramping up police powers and passing acts to banish anarchists or bar them entry.

The one exception was Britain, which prided itself on traditions of asylum and civil liberties. Anarchists on the lam congregated in London, relatively untroubled by the police.

So did thousands more European migrants, chiefly eastern European Jews fleeing persecution in Russia. From 1881 to 1901 the number of Russians and Poles in London leapt from less than 9,000 to more than 53,000, triggering a nativist backlash. The anti-immigration activist William Henry Wilkins decried this “alien invasion,” claiming that it turned parts of London into “a foreign city.”

In practice, the immigrant masses and the handful of anarchists were quite distinct. But since people believed — as tabloids and sensation novels continually reminded them — that some foreigners might be bomb-throwing revolutionaries, they didn’t think rationally about the differences. They saw what Wilkins called “destitute and degraded foreigners” bringing “pauperism, vice and crime.” 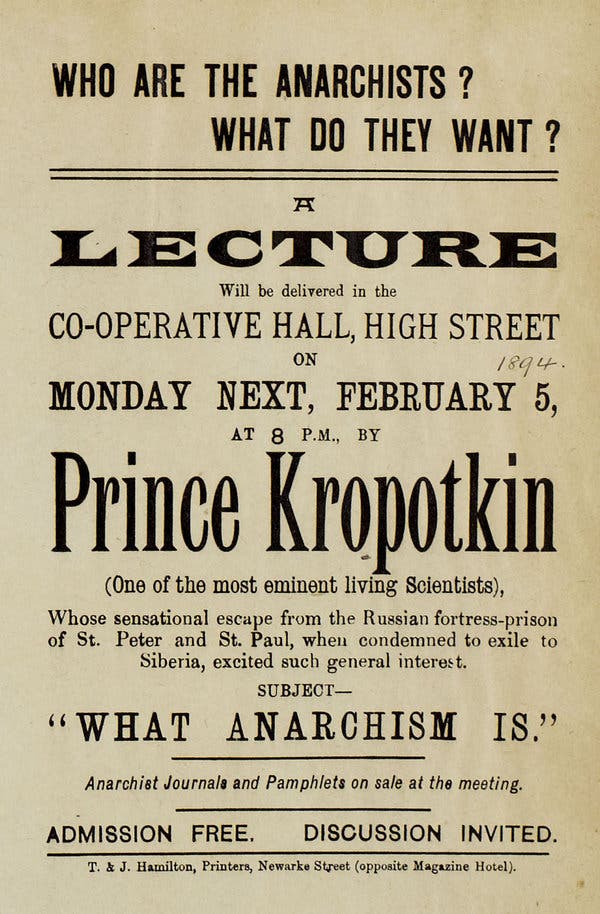 Then the Greenwich attack happened, and it seemed to confirm the link nativists suspected between foreigners and violence. Police swooped down on a German anarchist club in Soho and rounded up Italians suspected of building bombs. Hundreds of protestors mobbed Bourdin’s funeral cortège, hissing “No bombs here!” “Go back to your own country!”

With the episode fresh in the public mind, the leader of the Conservative Party, Lord Salisbury, introduced a parliamentary bill to restrict immigration. The British “have always loved to consider this island as the asylum of those who are defeated in political struggles,” Salisbury acknowledged, but the Greenwich incident “caused an entire change in that idea of the right of asylum.” There were terrorists, there were refugees, sometimes there were terrorists who were also refugees, and so refugees should no longer be allowed in.

Salisbury was wrong. There was no evidence that “England is to a great extent the headquarters, the base, from which the Anarchist operations are conducted,” as he had said. There was even less to link anarchists and Jewish refugees. Mobilizing fear of anarchists to promote immigration restrictions made good politics but very bad policy.

If public safety was really the objective, keeping out continental Europeans achieved next to nothing. As Salisbury knew, by far the greatest terrorist threat came from Britain’s own subjects: Irish nationalists. In the 1880s, Irish revolutionaries had dynamited the London Underground, the Tower of London and the House of Commons, causing far more carnage than a foreigner ever did.

Bourdin’s bomb was presumed to be the only anarchist incident in British history, and anarchists (unlike Communists) didn’t succeed in overthrowing governments. In retrospect it looked to Joseph Conrad, who used the incident as the inspiration for his 1907 novel “The Secret Agent,” like “a blood-stained inanity of so fatuous a kind that it was impossible to fathom its origin by any reasonable or even unreasonable process of thought.”

But that is not to say that anarchism had no impact.

Anarchism helped shape modern immigration restrictions across Europe and the United States. It underpinned the consolidation of international policing when criminal justice agents convened in 1914 to address the threat of anarchism, and formed what became today’s Interpol. It carved grooves in Western minds about foreignness and terrorism that we can slip into almost without thinking.

As technology advances, will it continue to blur the lines between public and private? Explore what’s at stake and what you can do about it.

Tighter policing and tighter borders came at a price. Anticipating Edward J. Snowden by more than a century, British writer Louisa Bevington warned her compatriots in 1895 about intrusive policing against “friendless foreign refugees,” arguing that it was “but the forerunner of an attack on their own liberties.”

In 1905, Parliament finished what Salisbury had started by passing an Aliens Act, which limited immigration for the first time in British history.

Acknowledging Britain’s traditional role as a haven for refugees, the new law included an asylum clause. Liberals wanted to frame it in the broadest way possible, so as to embrace anybody confronting “danger to life, limb and liberty.” Conservatives argued against it. Didn’t almost everyone in the world face danger to liberty, as judged by British standards? Britain couldn’t take everyone, and so the word “liberty” was struck.

That’s just the kind of debate unfolding today, in the wake of terrorist attacks in Paris and Brussels. Plus ça change, as Bourdin might say.

Maya Jasanoff is a professor of history at Harvard who is writing a book about the life and times of Joseph Conrad.