Religious Minorities Across Asia Suffer Amid Surge in Sectarian Politics

One of the churches bombed in Sri Lanka.  The Muslim Times has the best collection for interfaith tolerance and universal brotherhood

JAKARTA, Indonesia — The deadly attacks in Sri Lanka on Sunday highlighted how easily religious coexistence can be ripped apart in a region where secularism is weakening amid the growing appeal of a politics based on ethnic and sectarian identity.

In India, the country’s governing right-wing Hindu party is exploiting faith for votes, pushing an us-versus-them philosophy that has left Muslims fearing they will be lynched if they walk alone.

In Myanmar, the country’s Buddhist generals have orchestrated a terrifying campaign of ethnic cleansing against the country’s Rohingya Muslims.

And in Indonesia and Bangladesh, traditionally moderate Muslim politicians are adopting harder-line stances to appeal to more conservative electorates. 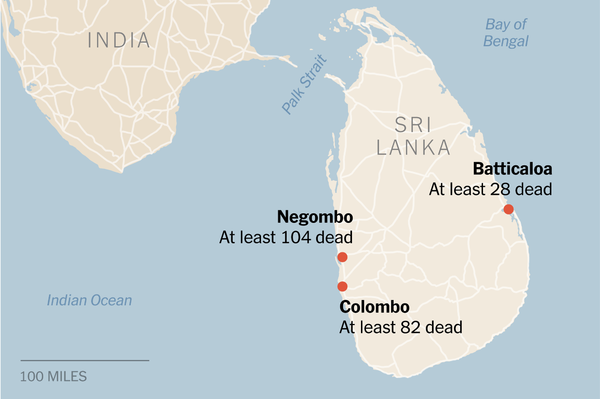 Sri Lanka Bombing Maps: What We Know About the Attack Sites

The attacks struck churches, five-star hotels and other sites in multiple cities.

The bombings of three churches in Sri Lanka on Easter Sunday highlighted the vulnerability of Christians in Asia, where religious minorities of many faiths have been battered by this surge of nationalism and sectarian politics.

[The bombings were the deadliest attack on Christians in South Asia in recent memory.]

The explosions in Sri Lanka, which killed over 200 people, “brought mourning and sorrow” on the most important of Christian holidays, Pope Francis said after celebrating Mass in St. Peter’s Square at the Vatican.

Christians make up only 6 percent of the population of Sri Lanka, which is still emerging from the shadow of a harrowing civil war between the Sinhalese Buddhist majority and ethnic Tamils, most of whom are Hindu or Christian.

The government on Monday blamed National Thowheeth Jama’ath, a little-known radical Islamist organization, for the attacks, which also included raids on three high-end hotels in Colombo, the Sri Lankan capital. Christians were a primary target, and their faith has been increasingly under attack by militants and politicians across South and Southeast Asia.