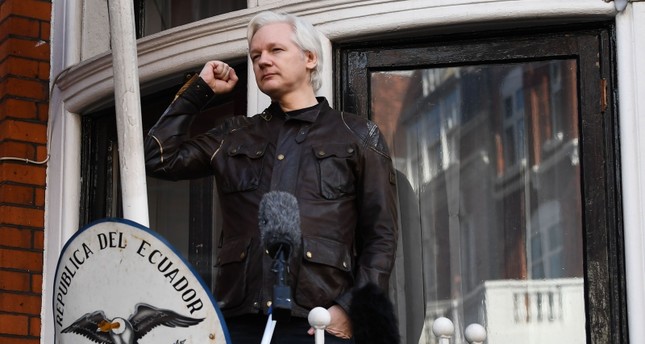 In this file photo taken on May 19, 2017 WikiLeaks founder Julian Assange speaks on the balcony of the Embassy of Ecuador in London. (AFP Photo)

WikiLeaks founder Julian Assange was arrested by British police on Thursday after they were invited into the Ecuadorean embassy where he has been holed up since 2012.

“Julian Assange, 47, has today, Thursday 11 April, been arrested by officers from the Metropolitan Police Service (MPS) at the Embassy of Ecuador,” the Scotland Yard said. Police said they arrested Assange after being “invited into the embassy by the Ambassador, following the Ecuadorean government’s withdrawal of asylum.”

“I can confirm Julian Assange is now in police custody and rightly facing justice in the U.K.,” Home Secretary Sajid Javid said.

Footage distributed by Ruptly showed about five to six men in suits forcibly escorting Assange out of the embassy building, surrounding him as he staggered down the steps and boarded a police van.

Assange took refuge in Ecuador’s London embassy in Knightsbridge in 2012 to avoid being extradited to Sweden, where authorities wanted to question him as part of a sexual assault investigation. That probe was later dropped in 2017, but Assange fears he could be extradited to face charges in the United States, where federal prosecutors are investigating WikiLeaks.

Assange was taken into custody at a central London police station and he will be brought before Westminster Magistrates’ Court, police said.

Assange’s relationship with his hosts collapsed after Ecuador accused him of leaking information about President Lenin Moreno’s personal life. Moreno had previously said Assange, who became an Ecuadoran citizen, has violated the terms of his asylum.

In a sovereign decision, Ecuador withdrew the asylum status to Assange after his repeated violations to international conventions and daily-life protocols, Moreno said Thursday.

Moreno said that he had asked Britain to guarantee that Assange would not be extradited to a country where he could face torture or the death penalty.

“The British government has confirmed it in writing, in accordance with its own rules,” Moreno said.

“The discourteous and aggressive behavior of Mr Julian Assange” as well as “hostile and threatening declarations” by an unnamed organization against Ecuador made the asylum of Assange “unsustainable and no longer valid,” Moreno said in a video message distributed via Twitter.

“He particularly violated the norm of not intervening in the internal affairs of other states,” he added.

Last week, the WikiLeaks had claimed that “a high-level source within the Ecuadorian state has told WikiLeaks that Julian Assange will be expelled within ‘hours to days’ using the INAPapers offshore scandal as a pretext — and that it already has an agreement with the UK for his arrest,” said WikiLeaks on Twitter, referring to documents allegedly implicating corruption by Ecuador’s president.

To some, Assange is a hero for exposing what supporters cast as abuse of power by modern states and for championing free speech. But to others, he is a dangerous rebel who has undermined the security of the United States.

Russia on Thursday slammed Britain’s arrest of Assange as a move against democratic freedoms.