‘We are not afraid’: Saskatoon Muslims press on with Friday services after New Zealand attacks 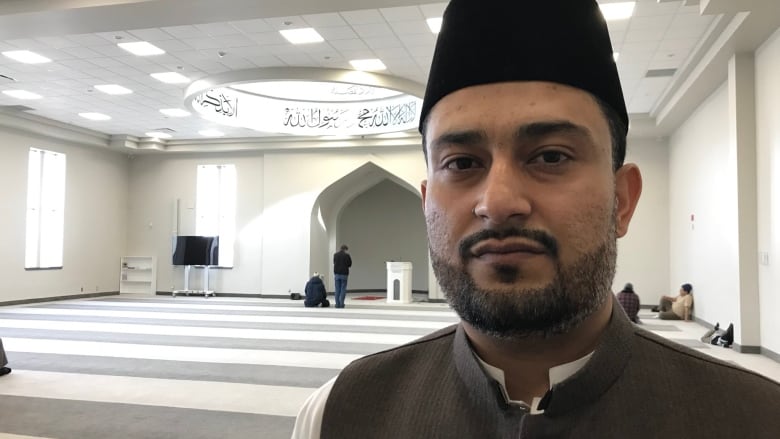 Shakoor Ahmad, the imam at Saskatoon’s largest mosque, decried the New Zealand attacks in his sermon Friday, calling them “deplorable” acts carried out against “people at their most vulnerable.” (Guy Quenneville/CBC)

“We are here to show that we are not afraid to offer our prayers,” said Shakoor Ahmad, the imam at Ahmadiyya Muslim Jama’at’s Baitur Rahmat mosque in the city’s southeast outskirts, moments before the 1:30 p.m. service began.

During his sermon for about 130 worshippers, Ahmad decried the attacks as “deplorable” acts of extremism taken against people who “were at their most vulnerable.”

Outside the prayer room and in the mosque’s parking lot, a group of about 20 security people — all volunteers from Ahmadiyya Muslim Jama’at — stood watch, dressed in bright yellow vests. One said it was double the amount of security people usually used for such services.

Saskatoon police officers also stood by the mosque’s front doors, part of a larger effort to make Muslim practitioners across the city feel safe as they visited their mosque following the attacks.

Fire chief Morgan Hackl was among the dignitaries present for prayer.

“Since morning today, calls are coming in from each community. Members, leaders, police chief, and our government also,” said Ahmad.

Police Chief Troy Cooper visited a separate mosque, the Saskatoon chapter of the Islamic Association of Saskatchewan, which also went ahead with its Friday service.

“We’re currently in contact with the Muslim leadership in the community to come up with a safety plan for them,” said police spokesperson Const. Ryan Ehalt early Friday morning. 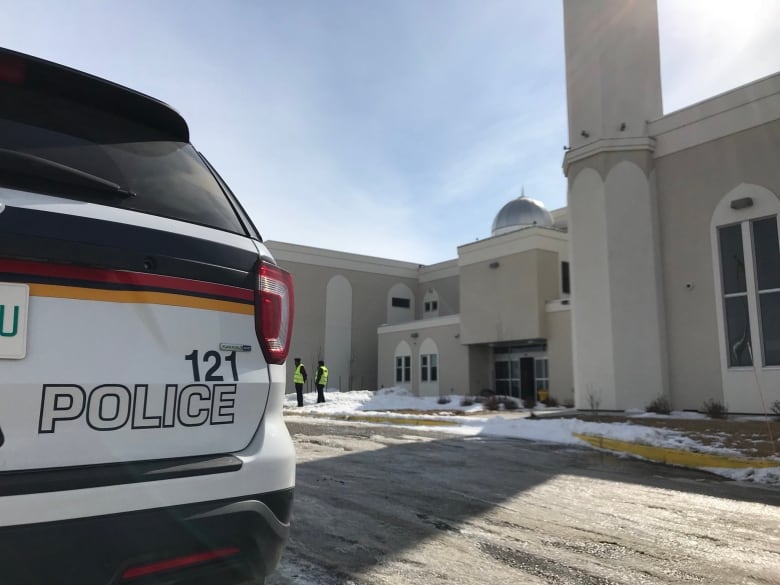 Ehalt said Saskatoon police have not received any reports of anti-Muslim activity.

Forty-nine people were killed and another 48 injured in shootings at two mosques filled with worshippers during Friday prayers in Christchurch, in what New Zealand’s prime minister is calling “one of [our] darkest days.”

A man in his 20s has been charged with murder and will soon appear in court, according  New Zealand’s police commissioner.

“Three other people were apprehended,” Bush said in a late-night briefing Friday, adding that one was later released.

According to Australian media reports, the accused is BrentonTarrant, 28, from the city of Grafton in New South Wales, Australia.

Residents encouraged to be vigilant

Ehalt said the attacks in New Zealand are “quite concerning.”

“Part of that is addressing those types of things and fears that might be present currently within the Muslim community of Saskatoon,” he said.

“I would just encourage citizens of Saskatoon just to report anything that they might feel could potentially be suspicious, although we don’t have any immediate cause for concern within Saskatoon.”

‘No place for Islamophobia’: Moe

Premier Scott Moe expressed his condolences Friday to the affected families and to, “the Muslim community here in the province that we represent, but also across the nation.”

Moe was asked if he was at all concerned about the safety of Muslims in Saskatchewan following word that Saskatoon police were increasing patrols around mosques in the city. Moe said he had faith in the police services in Saskatoon and across the province.

“I also have faith in people here in the province of Saskatchewan,” he said.

“We are one people in this province. We are neighbours in our communities wherever we live here in Saskatchewan and let’s treat one another with precisely the respect that we expect to be treated by them.”

When asked if he thought Islamophobia is an issue in Saskatchewan, Moe conceded it might be present in the province.

“There may be people that would have Islamophobic tendencies or thoughts,” he said.

“We are a society, we are a province that has accepted 108,000 people from, I think, over 150 countries all around the world in the last decade. We are most certainly an example of people coming to our communities for a better life here in Saskatchewan. And I think we provide that and we need to provide that as individuals to our neighbours.”

‘Shock and disbelief and incredible sadness’

IhsaanGardee, executive director of the National Council of Canadian Muslims (NCCM), took part in a public conversation about hate speech Thursday night in Saskatoon. He spoke with CBC Friday morning.

“Just shock and disbelief and incredible sadness and grief for the victims and their families and those that are injured,” Ihsaan told Stefani Langenegger on CBC Radio’s The Morning Edition. “Our thoughts and our prayers are with them.”

Gardee urged politicians from around the world to call the shootings a terrorist act. 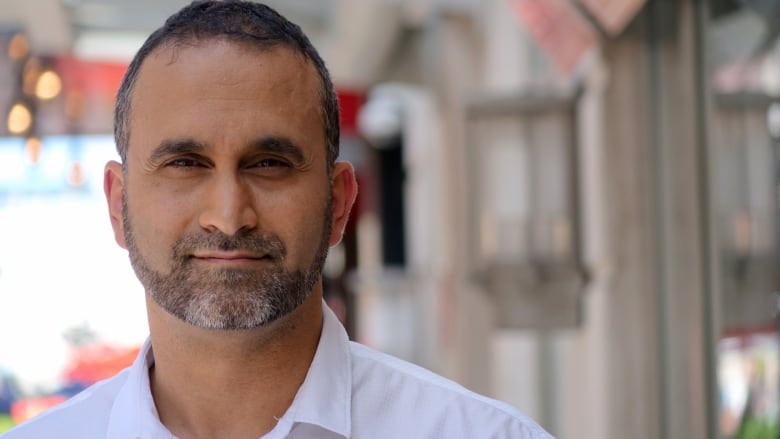 “Let’s call it what it is,” he said. “This white supremacist ideology is growing and it is something of deep concern.”

Gardee found out about the attack about an hour after speaking at a panel discussion about the impact of hate speech and where hate speech can lead.

“I think there is a growth in online hate that I think governments and communities around the world are struggling with — how can they effectively tackle [that] while at the same time ensuring we protect our very hard-won and cherished right to free expression,” he said.

Gardee said the NCCM is calling on elected officials to stand up and to speak out against these terrorist acts.

“And to not use dog whistle politics to appeal to fringe groups, individuals who are espousing these horrific and hateful ideologies. 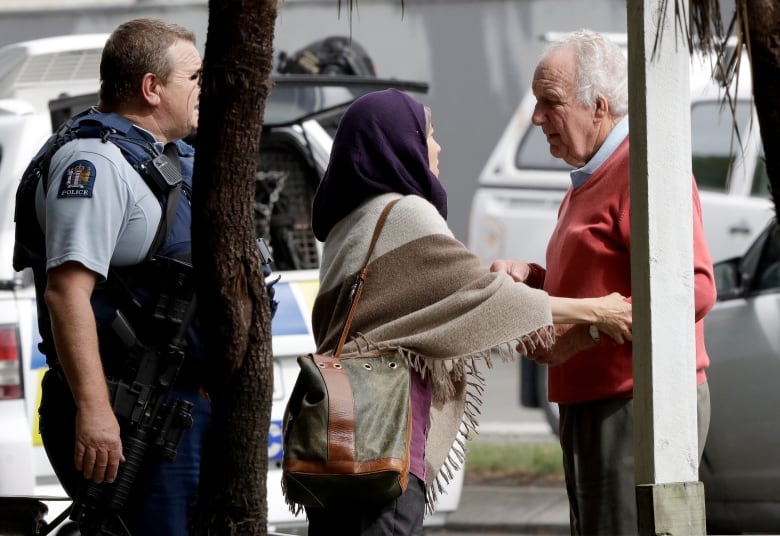 Police escort people away from outside a mosque in central Christchurch, New Zealand, Friday, March 15, 2019. Multiple people were killed in mass shootings at two mosques full of people attending Friday prayers, as New Zealand police warned people to stay indoors as they tried to determine if more than one gunman was involved. (Mark Baker/Associated Press)

“We have some politicians who have continued to debate whether we should use the term Islamophobia and at the same time engaging in anti-immigrant, anti-Muslim fear mongering,” he added.

“And this is all happening at a time when Muslims are being gunned down in Christchurch and just over two years ago in Quebec.

“This kind of rhetoric has consequences.”

He said words do matter because they provide a fertile ground for people to feel as though they’re hateful ideologies are valid and it emboldens them to act out.

Gardee said there is heightened anxiety in the Muslim community.

The NCCM has called on Muslim communities to review their security measures and get in touch with local law enforcement if they have concerns. 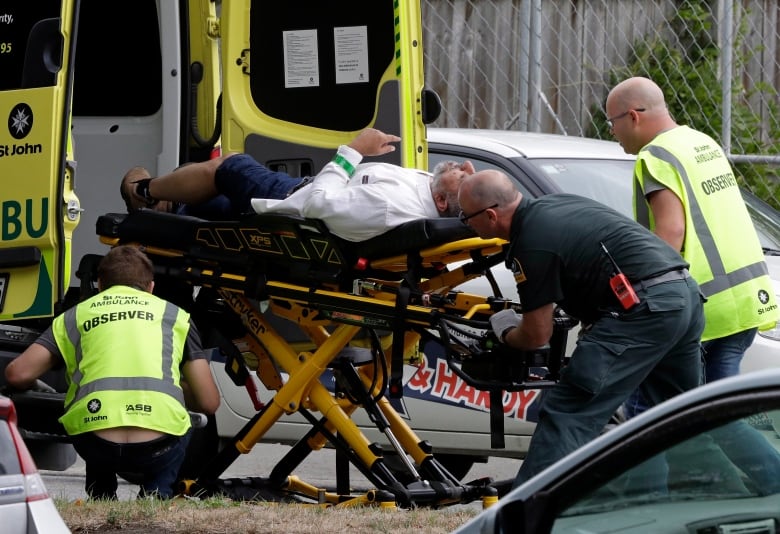 Ambulance staff take a man from outside a mosque in central Christchurch, New Zealand, Friday, March 15, 2019. A witness says many people have been killed in a mass shooting at a mosque in the New Zealand city of Christchurch. (Mark Baker/Associated Press)

“I think everyone has a certain level of anxiety and there is certainly fear out there, but I think we need to not allow our fear and those who would try to promote this fear and hatred to win.

The majority of those killed were at the Masjid Al-Noor, a mosque on Deans Avenue in the central part of Christchurch, with the shooting occurring around 1:45 p.m. local time.

During a second shooting at the nearby Linwood Masjid Mosque, seven people were killed. One more person died later at Christchurch Hospital.