Malmö Imam: ‘We do not hate mosque shooter’ 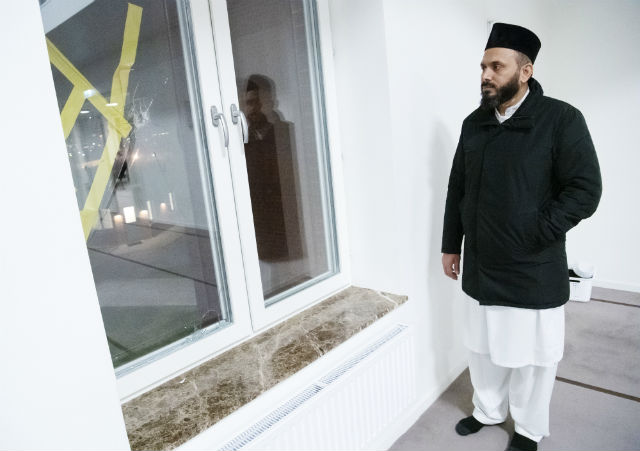 A shot was fired through a glass door at a Malmö’s Mahmood Ahmadiyya mosque, shortly after midnight on New Years’ Day, with police investigating the attack as a possible hate crime.

But Rizwan Afzal, imam at the Mahmood Ahmadiyya mosque, told The Local that Malmö’s Ahmadi Muslim community had gone out as normal on New Year’s Day to clean up after the celebrations, hoping to show that their love for their fellow man had not been diminished.

“Despite this shooting incident, we went out and we did cleaning in the city,” he said. “We showed our love for our
country and our city, because that’s our duty.”

Afzal came to Malmö after five years serving as imam at a mosque in Sierra Leone, where he arrived at the tail end of the African country’s brutal civil war.

“We have many mosques there, but one was never shot at,” he said. “Our community is known all over the world and we are renowned for our peacefulness, even in Sierra Leone.”

“I don’t know what happened with this person who shot at our place, but still we don’t feel any hate even for him,” he continued. “Even if we see him, we can explain to him that we have love for him.”

Anna Göransson, a press spokesperson for the Malmö police said that the attack was being investigated as an attempted murder.

“From the observations that we have made we believe that the mosque was shot at after midnight and that’s why we are categorising it in this way,” she told Sydsvenskan.

“We have no suspect and no confirmed motive, but we are all the time conscious that it might be a hate crime.”