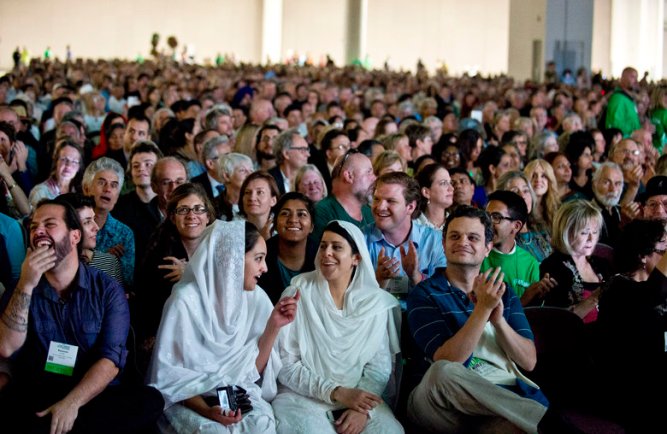 In 1893, during the World’s Columbian Exposition in Chicago, thousands gathered over 17 days in September to witness a “World’s Parliament of Religions.” For many Americans, it was their first encounter with Hindus, Sikhs, Buddhists, Muslims, Jews, and other people of non-Christian faith. The meeting had an air of expectation. According to the organizers, the Parliament would “bring about a real fraternity of nations, and unite the enlightened peoples of the whole earth in a general cooperation for the attainment of the great ends for which human society is organized.” They would “unite all religion against all irreligion” and secure “the coming unity of mankind in the service of God and man.”

This year, on the 125th anniversary of the original meeting, thousands of people gathered in Toronto, Canada, over seven days in November, to continue the work of building religious fraternity. Although the organizers set their sights somewhat lower, they were nonetheless “bringing our spiritual communities together to work toward a common goal: the pursuit of a more just, peaceful and sustainable world.” The Toronto Parliament offers a snapshot of the accomplishments of the interfaith movement and serious challenges it faces. In the past 125 years, religious pluralism has become much more widely accepted, at least in the United States and Canada, but religious unity remains an elusive goal. At a moment when religious conservatives make headlines, it is worth paying attention to what happened at the 2018 Parliament. Despite the Parliament’s limits—many groups chose not to attend and those that do sometimes don’t get along—it is the closest thing we have to a progressive international interfaith movement.

In Toronto, the thousands of attendees (nearly 10,000, according to the organizers) were a mixture of the world’s religions. The mostly North American visitors mingled with many different spiritual communities and faith leaders. The breadth of traditions was impressive, from the Catholic Archdiocese of Toronto and the American Sikh Council to the Alliance for Inclusive Heathenry and the Interfaith Vegan Coalition. The only groups that were conspicuously absent were politically or theologically conservative ones.

The Parliament has been a regular event since it was revived in 1993 and renamed “The Parliament of the World’s Religions” on the 100th anniversary of the original meeting. It met in Chicago in 1993 but soon went abroad to Cape Town (1999), Barcelona (2004), Melbourne (2009), and back to the United States in Salt Lake City (2015) before this year’s meeting in Toronto. Although the meeting is expensive ($495 USD per person), it attracts religious leaders, activists, and some everyday folks interested in the interfaith movement.

As the diverse crowd streamed through the Metro Toronto Convention Centre, it encountered a forest of posters and installations. Around one corner were placards narrating the history of the residential school system in Canada and its effect on Indigenous peoples. Around the next corner was an art installation of ribbons that asked passersby to reflect on what climate change means to them. A prayer wall invited participants to write out their hopes for the future and put them on display. Some prayed for “world peace” while others prayed “for the children of Yemen,” “prisoners of conscience,” or “a Democratic House & Senate in midterm U.S. elections.”

Climate change was a central focus of the Toronto Parliament. “It’s the same sun that makes whatever grows in Europe grow. Something happened in the history that caused superficial ways to deter people from seeing and relating to universal truths,” said Tom Porter, an elder from the Mohawk Nation of Akwesasne, in an interview with the CBC. “The only way we’re going to be able to see that is if we peel all of those Christmas decorations off so we can see the real tree again instead of the artificial shiny objects.”

Margaret Atwood, the Canadian author most famous for writing The Handmaid’s Tale, spoke on the theme of “Climate Change and Women.” She pointed out that women are especially vulnerable to the social instability that climate change is already creating. “Unless people of faith get behind fixing the planet, it won’t happen,” she said in a conversation with Dr. Lucy Cummings. Cummings, who is the executive director of Faith and the Common Good, an organization that supports religious communities in sustainable practices, pointed out that “Indigenous women are on the front lines” of climate change, especially in protests against oil pipelines across North America.