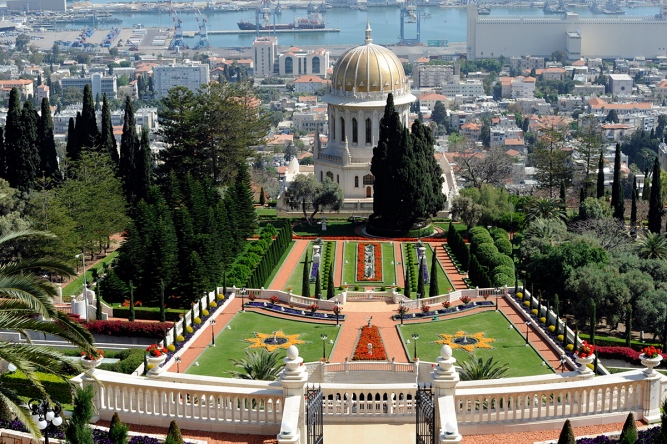 Bahai World Center in Haifa.  The Muslim Times has the best collection to promote interfaith tolerance

The Bahá’í faith began to take its present form in 1844 in Iran. It grew out of the Shi’ite branch of the Muslim faith.

The faith was proclaimed by a young Iranian, who called himself The Báb. He said that a messenger would soon arrive from God, who would be the latest in a line of prophets including Moses, Muhammad and Jesus Christ.

This idea of progressive revelation is of central significance for the Bahá’í faith.

The Báb and his followers were persecuted by the Muslim hierarchy and the Báb was eventually executed because his teachings contradicted a central point of Islamic faith – that Muhammad was the final prophet.

Although the finality of Muhammad’s revelation is universally accepted by Muslims, some Bahá’i scholars suggest that this belief is based on a particular interpretation of Qur’anic verses and that a different interpretation is possible.

In 1852, one of the Báb’s persecuted followers had a revelation in prison that he was the prophet that the Báb had proclaimed. He called himself Bahá’u’lláh, meaning The Glory of God.

Bahá’u’lláh was the founder of the Bahá’í faith. His life as a prophet was spent in a series of exiles that culminated in Acre, where he wrote the Kitab-i-Aqdas, one of the key Bahá’í scriptures, as well as other spiritual works and letters. He died in 1892.

Bahá’u’lláh was succeeded by Abdu’l-Bahá, who spent much time from 1908 spreading Bahá’í teachings around the world and the faith soon had significant (though small) communities in Europe and North America. He also developed Bahá’í ideas of social reform and international justice and expounded Bahá’í beliefs through a series of letters.

Abdu’l-Bahá died in 1921 and was succeeded by his eldest grandson, Shoghi Effendi, who continued the missionary work of the faith, and further developed Bahá’í philosophy. Shoghi Effendi also created or expanded the Bahá’í shrines and gardens in Israel.

After Shoghi Effendi’s death in 1957, the leadership of the faith passed to a group of believers rather than an individual and now rests with the Universal House of Justice.

The Bahá’í faith has continued to expand, particularly in the third world, and now is the most widespread faith in the world after Christianity. The expansion has not been without trouble and Bahá’í have been persecuted, particularly in Iran, the land where the faith began.