Thomas Jefferson is remembered as a progressive man who wrote the Declaration of Independence and called slavery an abomination, yet he was also a slaveholder himself who fathered several children by a woman he owned. Martha Teichner reports.

Black and white thinking never did anyone good. We have to judge people in their totality and in the context of their time.

The Muslim Times has the best collection to refute racism and Islamophobia.

Here we present a collection of articles from the Muslim Times:

Thomas Jefferson Was a Muslim

BY ABBAS MILANI Source: The New Republic; April 25, 2014 Thomas Jefferson’s Qur’an: Islam and the Founders by Denise A. Spellberg In the smear campaign before the election for the […]

Book Review from Amazon In this original and illuminating book, Denise A. Spellberg reveals a little-known but crucial dimension of the story of American religious freedom—a drama in which Islam […]

The Huffington Post  |  By Carol Kuruvilla Posted: 04/13/2015  Thomas Jefferson was a staunch supporter of religious liberty, but his quest to make sure church and state stayed separate in American […]

It is a book review of Thomas Jefferson’s Qur’an: Islam and the Founders by Denise A. Spellberg (Knopf) Reviewed by Abbas Milani, who is s the director of Iranian Studies at Stanford […]

by Caitlin Aber Ms. Aber is an HNN intern. Islamophobia has spiraled out of control in the United States recently.  Terry Jones, a Christian minister with a small congregation in […]

What President Thomas Jefferson Can Teach Us, Other Than Separation of Church and State

Epigraph: And if Allah did not repel some men by means of others, there would surely have been pulled down cloisters and churches and synagogues and mosques, wherein the name […]

Listen to author’s interview in NPR Thomas Jefferson had a vast personal library reflecting his enormous curiosity about the world. Among his volumes: a Quran purchased in 1765 that informed […]

Courtesy of Hanif Koya, California Author: Denise Spellberg Introduction In this original and illuminating book, Denise A. Spellberg reveals a little-known but crucial dimension of the story of American religious freedom—a […]

During the 1770s Jefferson purchased a number of Arabic texts, which might have given him the desire to learn the Arabic language and could have significantly reinforced his commitment to […]

Source: NPR Thomas Jefferson had a vast personal library reflecting his enormous curiosity about the world. Among his volumes: a Quran purchased in 1765 that informed his ideas about plurality […]

Recently, a self-styled “pastor” in Florida sparked a worldwide controversy by threatening to burn copies of the Qur’an, the Islamic holy book. But he was far from the only member of America’s right wing to condemn Islam as a fundamentally evil religion. It is not uncommon for these religious conservatives to claim the nation’s Founding Fathers, in particular Thomas Jefferson, as supporters of their war against Islam…

Zafarullah Khan, A Thomas Jefferson of Pakistan Would have been Disappointed by 9/11

Picture of the Day: Thomas Jefferson’s Qur’an used for Oath in 2007

By Zia H Shah MD Source / Courtesy: Review of Religions and Alislam.org.  First published in 2007. A compelling argument that Thomas Jefferson negated belief in the divinity of Jesus […] 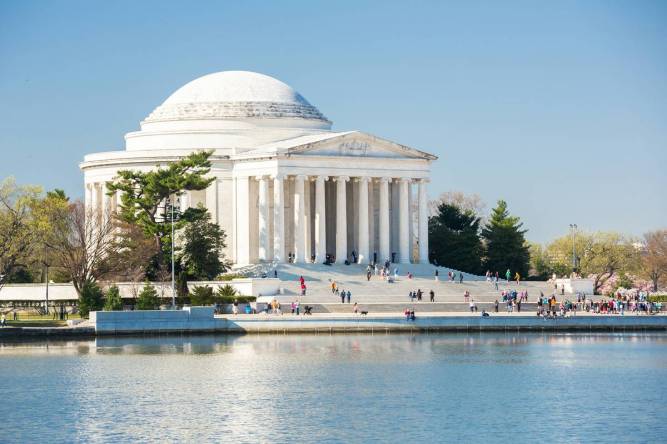 Jefferson memorial in Washington DC. President Thomas Jefferson was a Deist and the first US President accused of being a Muslim

We have saved the video in the Muslim Times for the posterity: