‘Do Not Despair of Our Present Difficulties.’ Read John McCain’s Powerful Farewell Letter 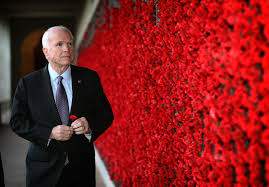 In a final letter written before his death, the late Arizona Sen. John McCain said he had enjoyed “experiences, adventures and friendships enough for 10 satisfying  lives” and urged Americans not to “despair of our present difficulties.”

“‘Fellow Americans’ — that association has meant more to me than any other,” McCain wrote. “I lived and died a proud American. We are citizens of the world’s greatest republic, a nation of ideals, not blood and soil. We are blessed and are a blessing to humanity when we uphold and advance those ideals at home and in the world.”

Family spokesperson Rick Davis, McCain’s former presidential campaign manager, choked up as he read the letter aloud at a press conference on Monday.