YANGON, Myanmar (AP) — A social media account run by the office of Myanmar leader Aung San Suu Kyi quotes her as saying that “hate narratives from outside the country” have fueled tensions between Muslim Rohingya and Buddhist Rakhine communities in the country’s west. 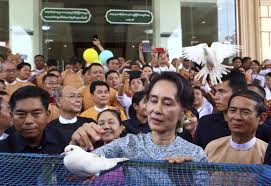 The Facebook page of the State Counsellor Office said Suu Kyi made the comment in a discussion Wednesday with Christine Schraner Burgener, special envoy of the United Nations secretary-general for Myanmar. It said topics included the situation in Rakhine state, where about 700,000 ethnic Rohingya have fled since last August to escape violent counterinsurgency activities by security forces responding to attacks by a group of Rohingya militants.

“The State Counsellor explained that the confidence building between the communities requires patience and time, and the United Nations needs to support in those efforts,” said the Facebook post. “She stated that the mistrust between the two communities exists for decades.”