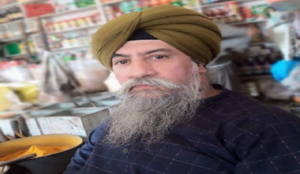 President of Peshawar based Khalsa Peace and Justice Foundation of Pakistan Radesh Singh Tony told TOI that unidentified gunmen shot dead Charanjit Singh in Budhbir area while he was sitting in his grocery shop.

He said being an affluent community Sikh’s often become the target of fundamentalist groups.

Radesh said the targeted killing of Charanjit Singh who was a member of Gurdwara Bhai Joga Singh on the completion of assembly term of former cricketer turned politician Imran Khan led Pakistan Tehreek-e-Insaf (PTI) party has spread fear among the community.

He informed that the PTI government in KPK had completed its term on May 28 midnight and the caretaker chief minister of KPK would take its charge on May 31 before country’s general elections scheduled for July 25.

Singh was not only a prominent Sikh voice of the community in Peshawar but he was also a member of Jatha of Panj Payara (five beloved ones) and would often lead the nagar kirtan in the streets of Peshawar on various religious occasions.

He is survived by two sons, a daughter and wife informed Radesh Singh adding that his mortal remains would be cremated on Wednesday at Attock cremation ground.

This was the first target killing of a Sikh after the assassination of Pakistani Sikh doctor and minister of minorities of KPK in 2016. The Pakistani Taliban’s had claimed his killing. In 2013-14 as many as ten Sikh’s were killed.

In past, many Hindu and Sikh families from KPK and other restive frontier parts of Pakistan had migrated to India.