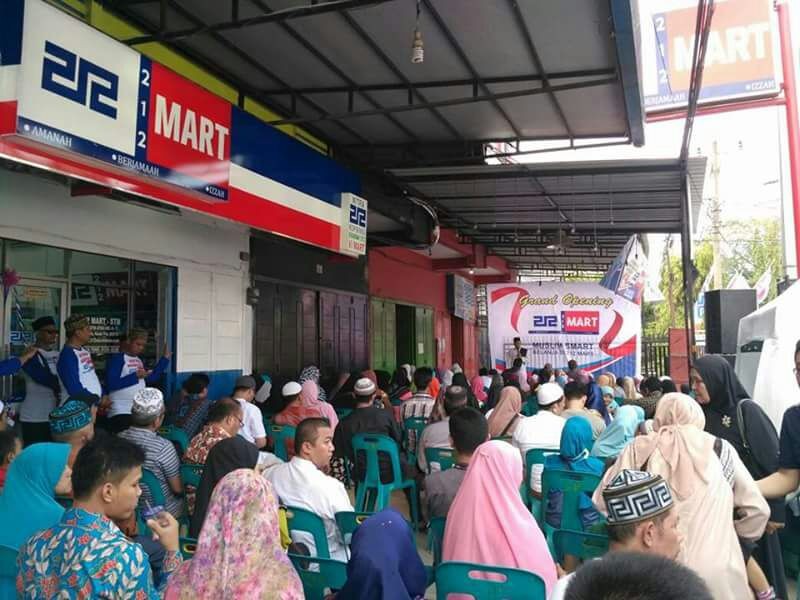 Aside from 212 Mart, Sodaqo Mart is also a relatively popular brand. Such stores are popping up in small towns and big cities alike, growing primarily in middle-class communities. (JP/Apriadi Gunawan)

Indonesia has seen growth in Islamic convenience stores that tap into Muslim consumers’ wish to buy halal products and their dream of the glories of a “Muslim economy”.

Nunukan resident Fahira Putri, 22, said she preferred buying personal items at Islamic convenience stores, or minimarkets, because she could be sure the items were halal. The area where she lives in Nunukan, North Kalimantan, is home to several Islamic minimarkets

Fahira, who wears a niqab, said she was happy to find easy alternatives to shopping at conventional stores for Muslim customers like herself. “I feel relief [knowing] that the items I bought are alcohol free,” she told The Jakarta Post recently.

Such stores operating under Islamic economic principles are not new to the country. However, growing Muslim conservatism and identity politics have seen a renewed surge to these businesses. Some of the stores even use “212” in their branding, as in 212 Mart, in reference to the Dec. 2 protests in 2016, when hundreds of thousands of people rallied in Jakarta. The protesters had demanded the dismissal of then Jakarta governor Basuki “Ahok” Tjahaja Purnama, a Chinese-Indonesian of the Christian faith who was later convicted for blasphemy against Islam.

The diverse groups of these “Defend Islam” rallies, from conservative Muslims to hardliners, later branched out into various economic and political movements that they dubbed the “Spirit of 212”. One of these economic movements was Sharia Cooperative 212, under which the 212 Mart brand was established.

Aside from 212 Mart, Sodaqo Mart is also a relatively popular brand. Such stores are popping up in small towns and big cities alike, growing primarily in middle-class communities. Unlike regular stores, Islamic stores usually do not sell cigarettes, condoms or products containing alcohol, including cosmetics. Their employees also take breaks for the daily prayers, closing the stores when they do.

Most of these Islamic stores still sell regular products from secular brands or from producers that are owned, partially or fully, by non-Muslims or Chinese-Indonesians. It sells instant noodles from publicly listed Indofood Sukses Makmur and toiletries from publicly listed PT Unilever Indonesia, a British-Dutch multinational consumer goods company. Chinese-Indonesian Sudono Salim, also known as Liem Sioe Liong, founded Indofood and the company’s current CEO is his son, Anthoni Salim.

However, the stores have a vision to build Muslim-only trade networks and are trying to accommodate small Muslim-owned businesses. The website of Sharia Cooperative 212 stated that one of their goals was to close the gap between the small number of Muslim-owned national productive assets and the 87 percent majority Muslim population. The website also provides a directory of Muslim businesspeople and encourage them to support each other. Up to Apr. 24, the directory listed about two dozen entrepreneurs providing goods and services, from sterile underwear to homeschooling.

Fahira said that she opted for Islamic brands whenever possible, such as purchasing Wardah cosmetics over those with a secular image.

She believed that in buying goods at Islamic stores and consuming products from Muslim producers, she would contribute to the development of the Islamic economy. Fahira also intends to contribute more directly by starting her own business.

“I have a dream of starting my own Islamic business. I want to start a sharia cafe,” she said. In her dream cafe, instead of music, she would play the recorded sermons of her favorite preachers.

Thousands of kilometers from Nunukan in Sumatra, 212 Mart head Sehrin Hamonangan Damanik has observed an increasing demand in Islamic outlets.

Sehrin operates the store in Medan, North Sumatra, and aims to open 25 new stores this year, in addition to the five 212 Mart outlets currently in Medan.

“People respond [to the business] well here, so we have a pretty good target market. We want to expand so that there is at least one store in each district,” he said.

More people were motivated to join the 212 Mart businesses, Sehrin claimed, because of its sharia profit-sharing scheme. “Every Muslim can gain ownership in 212 Mart by buying 20 shares, which are Rp 100,000 [US$7.30] per share,” he said. “Alhamdulillah, one 212 Mart in Medan can earn up to Rp 9 million per day.”

“We’re not afraid of competition [from mainstream convenience stores]. Our customers are Muslims and our goal is to improve the Islamic economy,” said Sehrin.

Islamic economy expert Adiwarman Karim said Islamic stores had the capability and potential to compete with established stores such as Alfamart and Indomaret, even though they played in a different league.

“It’s cheaper and easier to open Islamic stores,” said Adiwarman. “The more people put their money into the business, the more sense of ownership they will have, as well as the desire to shop at such stores,” he said.

The promising business concept and market, however, could see a backlash if their operators failed to maintain their focus on improving the Islamic economy, Adiwarman added.

Gadjah Mada University sociologist Arie Sujito said that the rise of Islamic convenience stores was indeed connected to political motives, especially with those of 212 groups.

“Some people want to keep the [212] spirit alive through economic symbols,” he told the Post.

“It’s anyone’s right to start any kind of business, but don’t let it trigger political sentiments that could potentially divide the people ahead of the 2019 presidential election,” said Arie.

Even though he considered such minimarkets as a new form of religious movement, Arie believed that many people still cared to preserve the nation’s heterogeneity. He called on moderate Muslims, interfaith figures and rights activists to raise their voices in keeping the country united.

“We can’t counter the [Islamic] stores with other faith-based minimarts. We should instead embrace them, while at the same time ensuring that we’re not being lured to embrace certain political views through their existence,” Arie said.