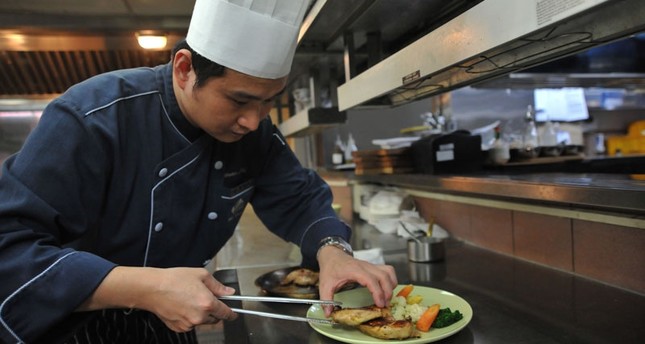 This photo taken on January 19, 2018 shows a chef preparing a Halal meal at the Gaia Hotel, which caters to tourists from Muslim-dominant countries, in the Beitou district near Taipei. (AFP Photo)

Mainland tourist numbers have slid dramatically as China relations deteriorate, with speculation authorities there are turning off the taps to pressure Taiwan’s Beijing-sceptic government.

Taiwan is now looking to boost relations with 16 south and southeast Asian countries, as well as Australia and New Zealand — what it calls its “southbound policy” — and is seeking more visitors from the region.

That has meant a growing number of tourists from Muslim-majority countries, such as Malaysia and Indonesia. Taiwan welcomed 30 percent more visitors from southeast Asia in 2017.

Taoism is the prevalent religion in Taiwan, with Muslims making up less than two percent of the population, but tourists who spoke to AFP said they were surprised how welcome they felt.

“I really like the natural scenery in Taiwan and the people are very nice,” said Ashma Bunlapho, 40, a Muslim tourist from Thailand on a five-day trip with her husband.

She found halal restaurants using Google Maps, including a shop selling beef noodle — a Taiwanese favorite — and felt free to pray where she chose, taking her mat with her to famous nature spots including Sun Moon Lake in central Taiwan.

Malaysian tourist Dean Idris said halal eats were easily accessible as he visited Taipei with his two young children, taking in the zoo, a night market, and a historic district close to the city’s best-known temple.

“I learned that Taiwan, Taipei especially, is actually Muslim-friendly,” he told AFP outside a mosque in the capital, where he had gone to pray.

Thailand, South Korea and Japan are among Asian nations that have been tapping into the Muslim travel market, which has been fueled by growth in cheap flights and a booming middle class in countries such as Indonesia.

Fried Chicken Master, a small shop not far from Taipei’s Chiang Kai-shek Memorial Hall — one of its most famous landmarks — has adapted to the trend, selling a halal version of the snack, which is also a Taiwanese favorite.

“We hope to be able to serve tourists, exchange students, or Muslims living in Taiwan. As Taiwanese we are proud of our food,” said Louis Tsai, a spokesman for Super Qin Group, which owns the shop.

A trip to one of Taiwan’s hot springs resorts tops most tourists’ to-do lists and Gaia Hotel in mountainous Beitou, best-known for its natural pools, provides guest rooms with prayer direction signs and prayer schedules.

Minibars there are alcohol-free and cakes do not include pork-based gelatin. To obtain its halal certification, the hotel kitchen created a separate cooking and dining area.

“Since the number of Chinese tourists has decreased, and southeast Asia is quite a sizable market with many Muslims, this is an area we have to actively pursue,” Jack Chang, Gaia’s operations manager, told AFP.

On a recent visit to Istanbul, Taipei mayor Ko Wen-je met with Turkish lawmakers who want to fund the building of a third mosque in Taipei, according to the city government.

But some doubt whether the growth in Muslim tourism is enough to offset the lost income from the mainland.

Chinese visitor numbers dropped by a fifth last year, dropping since Taiwanese President Tsai Ing-wen came to power in May 2016.

Beijing still sees self-ruling democratic Taiwan as part of its territory and relations have become increasingly tense as Tsai refuses to acknowledge it is part of “one China”.

Salahuding Ma, secretary general of the Chinese Muslim Association, the largest halal certification body in Taiwan, says it is hard for the new wave of tourists to compete with their Chinese counterparts.

“The Chinese have wealth and spend lavishly,” he told AFP.

“If you are talking about southeast Asia, which countries can even compare?” he asked.

Ma says Taiwan would have greater success if it overcame the language barrier by encouraging students from “target countries” to work in the island’s tourism sector.

For Thai visitor Bunlapho, her lack of Chinese and limited English proved an obstacle when trying to find transportation to Taroko National Park on Taiwan’s east coast, famous for its deep gorges and sweeping cliff faces.

“I couldn’t figure out how to get there,” she lamented. 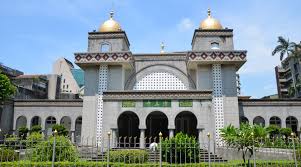