BY Jessica Glenza in New York

The Trump administration is creating an office to protect the religious rights of medical providers, including those who may oppose abortion or transgender rights, in a decision that is likely to be a lightning rod for controversy.

The new “division for conscience and religious freedom” in the US Health and Human Services Agency will defend healthcare workers who, on religious grounds, refuse to treat patients or take part in procedures. The division will be part of the agency’s Office for Civil Rights.

“Laws protecting religious freedom and conscience rights are just empty words on paper if they aren’t enforced,” said Roger Severino, the director of the health department’s civil rights division, and an outspoken opponent of abortion, same-sex marriage and anti-discrimination protections for transgender people. 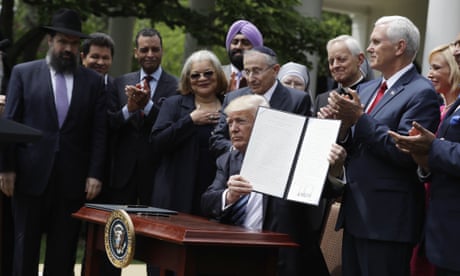 Among the speakers at the announcement of the new division were pro-life lawmakers; the leader of a religious liberty foundation who fought against a mandate that health insurance cover birth control; and a midwife who said she was wrongly refused a job at a women’s clinic because she opposed abortion.