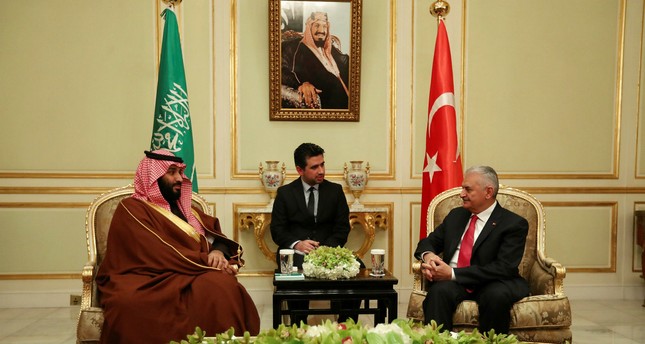 Turkey and Saudi Arabia are two key countries for ensuring permanent peace and stability in the Middle East, Prime Minister Binali Yıldırım said late Wednesday during an official visit to the Kingdom.

“It is necessary for both Saudi Arabia and Turkey to work jointly, not only for the benefits of two countries individually but also for regional and global peace,” Yıldırım added.

“We have discussed the ways to improve our bilateral trade and cooperation in the defense industry. I can say that we share almost the same view in terms of ways of solution for the matters concerning us and the region,” he concluded.

Yıldırım and Salman agreed on the necessity of taking a common stance to protect the Palestinians’ rights, according to prime ministerial sources.

In an hour-long closed-door meeting, the two leaders discussed the importance of Jerusalem’s status, the sources said on conditions of anonymity.

They also agreed that the Muslim countries should take a common stance on the protection of the rights of the Palestinians. They said the U.N. General Assembly’s decision to reject the U.S. move on Jerusalem has sent a strong message.

The meeting also discussed bilateral relations as well as the deep-rooted historical and religious ties between Turkey and Saudi Arabia.