Rohingya crisis: How trading and small business has grown inside Muslim refugee camps

The 150 portions of piazu, made by his mother from the aid package the family received after fleeing violence in Myanmar, sell for 1 taka each, or a little more than 1 US cent (£0.009p).

“I started my trading here with the relief I got,” Mohammad told Reuters. “I did not buy anything. I got this relief package five days ago and my mum made this piazu this morning.”

It also says problems like child trafficking existed in Bangladesh’s camps, even before they were overwhelmed by the more than 600,000 new arrivals. 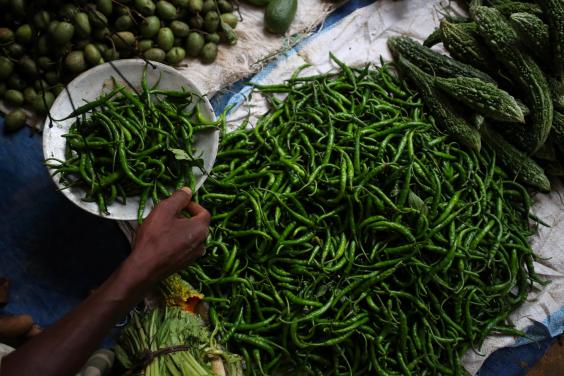 Now, driven by a need for food and other essentials, trade is starting to thrive in the Palong Khali camp, located about 2.5 miles from the Naf River, which marks the border between Bangladesh and Myanmar.

Some refugees are returning to their previous occupations to eke out a living.

Abul Fayaj, a 50-year-old vegetable seller from Buthidaung township in Rakhine, now sells green chillies to residents of the camp.

He said a Bangladeshi lent him money for the chillies, which he sells for 200 taka (£1.80) per kg, higher than the local market price of 130 taka per kg