In a small mosque in Edmonton’s east end, members of the Muslim community gathered for a special Friday sermon to denounce the Edmonton attacks days prior.

Dozens of worshippers from all walks of life sat cross-legged on the floor of the Al-Hadi mosque, listening to strong words from Imam Nasir Butt as he reaffirmed the teachings of peace and love outlined in the Qur’an.

“Islam forbids all forms of terror and extremism,” the imam said in his opening remarks. “The holy Qur’an teaches that killing even one innocent person is akin to killing all of mankind.”

The special sermon comes after a man drove a vehicle into a police barricade, running down Const. Mike Chernyk, before getting out of the car and stabbing the police officer last Saturday. 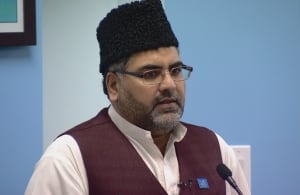 The same man then allegedly drove down Jasper Avenue hours later in a U-Haul truck and struck down four pedestrians.

“The religion of Islam means peace, so how can a religion that teaches peace and obedience could do this kind of action?” said Mohyuddin Mirza, outreach coordinator for the Al-Hadi mosque, on Friday.

The principal teaching that Ahmadiyya Muslims who attend his mosque believe, Butt said, is “love for all, hatred for none.” The religion’s founder, Mirza Ghulam Ahmad, told his followers that they should stay away from guns and solve problems with love and affection, Butt said.

To try and dispel myths about their faith, the Al-Hadi mosque often hosts discussions and open houses so the general public can learn more about Islam… read more at source.