Indo-Canadian politician Jagmeet Singh has opened up on his reaction, which earned him plaudits, after a video, showing a heckler spewing ugly remarks at him during a meet and greet event, went viral.

The New Democratic Party (NDP) leadership contender explained what was going through his mind as he was faced with “angry, hateful and Islamophobic comments”.
(Follow The Tribune on Facebook; and Twitter @thetribunechd)
“Many people have commented that I could have just said I am not Muslim. In fact, many have clarified that I am actually Sikh. While I am proud of who I am, I purposely didn’t go down that road because it suggests their hate would be ok if I was Muslim. We all know it’s not,” he said.
View image on Twitter 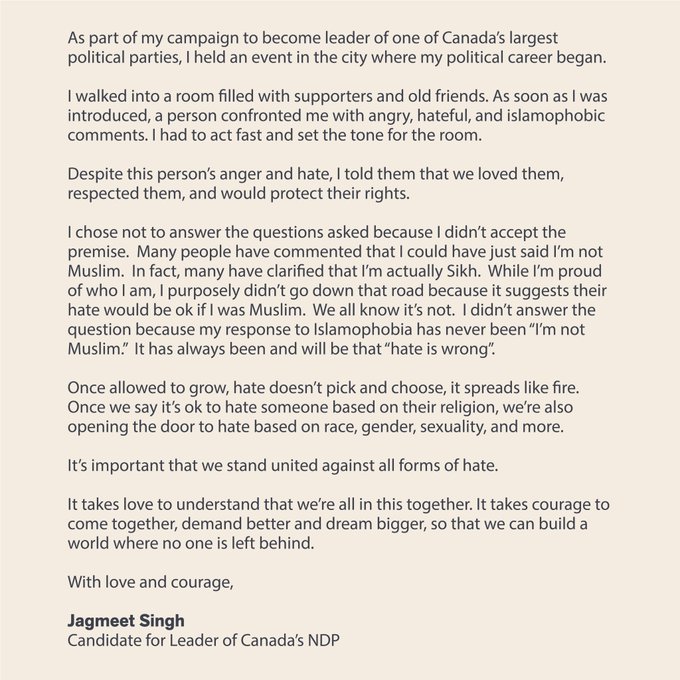 “I didn’t answer the question because my response to Islamophobia has never been ‘I am not Muslim.’ It has always been and will be that ‘hate is wrong’.”
Last week, a woman interrupted Singh’s campaign event in Ontario’s Brampton to accuse him of backing Shariah, a system of laws based on Islam.
The video shows Singh deftly defusing the situation by telling the woman he “loved and welcomed her”.
“When is your Sharia going to end,” the woman asked the Sikh politician.
Singh responded to the woman: “What this is, we don’t want to be intimidated by hate. We don’t want hatred to ruin a positive event, so let’s show people how we treat people with love.”
“We welcome you, we support you and we love you.” “Once allowed to grow, hate doesn’t pick and choose, it spreads like fire. Once we say it’s ok to hate someone based on their religion, we’re also opening the door to hate based on race, gender, sexuality, and more. It’s important that we stand united against all forms of hate,” the MPP addressed the issue in a statement released on Saturday.
“It takes love to understand that we are all in this together. It takes courage to come together, demand better and dream bigger, so that we can build a world where no one is left behind.”
Singh also took to Twitter and posted a statement explaining his stand on the issue.

Racial attacks are unacceptable. @theJagmeetSingh handled it with dignity & respect. Solidarity with all who confront hate #ndpldr

Twitter Ads info and privacy
One of Singh’s rivals, Manitoba MP Niki Ashton, also took to Twitter to compliment Singh.
“Racial attacks are unacceptable. @theJagmeetSingh handled it with dignity & respect. Solidarity with all who confront hate #ndpldr,” she said. — Agencies