Prime Minister Narendra Modi welcomed with reverence singer Adnan Sami along with his wife Roya and daughter Medina, who was born in May this year.

The Sami family met the Indian Prime Minister on Friday. They also gifted Arab sweets to him which they had bought from the city of Madina. During their forty-minute stay, Modi reportedly got comfortable with the baby girl and played with her.

“Sharing the sweets of our first-born daughter Medina with the Prime Minister whom I respect and look up to was an emotional moment for me and my wife… we will cherish this moment all our life,” the singer said.

Check the pictures from the occasion below: 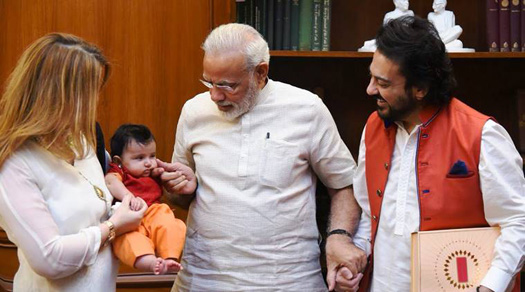 Roya Sami Khan who tied the knot with Adnan in 2010 happens to be the singer’s third wife. Earlier, he married Pakistani actor Zeba Bakhtiar in 1993 and an Arab Sabah Galadari in 2001.

Trained in Indian and western classical music and known for creating magic with the piano, Adnan is popular for hit romantic tracks such as Kabhi toh Nazar Milao, Bheegi Bheegi Raaton Mein and Tera Chehra. The singer has also won accolades for his Bollywood numbers in movies like Ajnabee, Saathiya, Lucky: No Time for Love and Bajrangi Bhaijaan.

In 2016, Adnan got Indian citizenship after which he was subjected to a lot of criticism.

Have something to add in the story? Share it in the comments below.