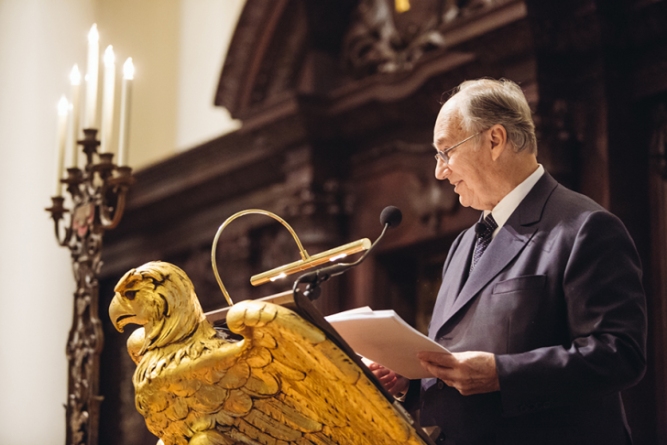 His Highness the Aga Khan, spiritual leader to millions of Muslim, delivers the Jodidi Lecture, at Harvard University, on Thursday, Nov. 12, 2015in Cambridge, Mass. The Aga Khan spoke about the challenges to a pluralistic society. (Image via Jeune Afrique)

Translation from the original French version published on August 24, 2017 at 10:47
By Marion Douet – Special Envoy to Abidjan

Chemical industry, luxury hotels, media, but also social works … This royalty without a kingdom is on all fronts. In six decades, he has built an empire dedicated to the fight against poverty, with a strong presence in West Africa. Investigation of a man as discreet yet powerful.

He is Imam, and it is with the honors reserved to the heads of state that the Aga Khan will be welcomed, on the occasion of his sixtieth anniversary as spiritual leader of the Ismailis, in each of the twenty countries. He will visit during this year during the festivities of his diamond jubilee, launched on July 11 in the French domain of Chantilly, north of Paris. Prince Aga Khan will  travel the world to meet ihis 15 million faithfuls, scattered between the cradle of Central Asia and four other continents.

The list of countries visited is still secret, but each stage will be an opportunity to fulfill the three missions which he considers to be indivisible:

A strong relationship with West Africa

While the Aga Khan is very attached to East Africa, he also maintains a strong relationship with the west of the continent. The latter was born in 1963, on the occasion of a call for help from Félix Houphouët-Boigny, Côte d’Ivoire’s first president.

The father of Ivorian independence wanted a factory in Abidjan to manufacture jute bags that was required  to transport the precious cocoa. He knew that the Aga Khan had interests in this industry in Bangladesh, where the natural fiber used to produce this packaging comes from.

Prince Aga Khan accepted and launched the construction of Filtisac, which was inaugurated two years later, becoming the first asset of the industrial holding company IPS in Africa.

With this investment, the Aga Khan intended to help the empowerment of the new nations “by substituting a local industry for imports,” said his collaborators.

“His vision was to get Côte d’Ivoire to become the world’s largest producer of cocoa,” said Nigerian Ibrahim Charles Amadou, a native of Nigeria, who receives us in his office as Chief Executive Officer of Filtisac. The walls, old newspaper covers traces the visits to the premises of illustrious figures, from the American president Richard Nixon to the current head of the IMF, Christine Lagarde.

Even today, Filtisac is the emblem of the Aga Khan network in West Africa.

It was in Kenya that Karim, born in Geneva in 1936, grandson of the previous Aga Khan, Mahomed Shah, spent his childhood. And it was in Tanzania, in Dar es Salaam, that he was against all expectations enthroned forty-ninth Imam of the Ismailis in 1957.

Jean-Michel Severino, who regularly met the Prince during the years 2000 when he was head of the French Development Agency (one of his main partners in Africa), “modernity” is precisely one of the features The most salient of this man, about whom he does not cease to praise: “He is at one and the same time an extremely courteous and well-balanced person, who never boasts, and very intelligent, with very geo-strategic reflection . He has a very good understanding of Africa, Asia of course, but also of the globality of the world, “says the development specialist.

At the turn of the 1960s, in the midst of euphoria of independence, one of the first decisions of the new Imam was to place development at the heart of its action.

“Prior to 1957, there were already schools, hospitals, banks and insurance companies in Asia and East Africa, but it is the present Aga Khan who created, organized and expanded the Aga Khan Development Network (AKDN), “said Malagasy representative Ferid Nandjee, a diplomatic representative of the Aga Khan in West Africa.

The AKDN mainly focuses on non-profit activities in the fields of culture (Cairo Al-Azhar Park, Mopti and Timbuktu Mosques) and education (from early childhood to university), and the network has also invested in no fewer than ninety companies, through its Aga Khan Fund for Economic Development (AKFED). Established in Switzerland, it is divided into poles: industry (IPS), tourism (TPS), aviation, finance, etc.

In eastern Africa, Kenya is both a strong place for the community and for AKFED, which has full swathes of the economy: banks and insurance (including Diamond Trust Bank), the Frigoken canning factory , The media empire Nation Media Group (publisher of the Daily Nation, the country’s first daily newspaper) and the luxury hotel chain Serena.

Difficult to evaluate, its economic weight makes the media quick to depict the Aga Khan as a “wealthy businessman”, to the dismay of his diplomatic representatives, who insists on the humanist vocation of all his action, even economic . “He is a profound benefactor,” says a business lawyer who knows AKFED well.

“Not only are companies used to finance the works, but note that they did a lot in West Africa, where there was not a single Ismaili on their arrival. They were both pioneers of corporate social responsibility (CSR) and private equity, at a time when neither of them existed in the region. ”

Read the complete story at the source