Islam is that religion which has forever enshrined the universal principles of freedom of religion, freedom of conscience and freedom of belief.

A counter-narrative to the hate-filled sermons of Daesh and other extremists is being driven forward by an Islamic leader with a global following of Muslims.

The Annual Convention (Jalsa Salana) of the Ahmadiyya Muslim Community will renew its call to show how Islam completely dismantles the ideology of hate that has fuelled the terrorist attacks across the world, including the UK.

His Holiness Hazrat Mirza Masroor Ahmad, the world head of the Ahmadiyya Muslim Community has consistently condemned extremism stating that ‘acts of terrors are utterly barbaric, brutal and senseless…completely opposed to the teachings of Islam…and are a complete violation of everything that Islam stands for.’ 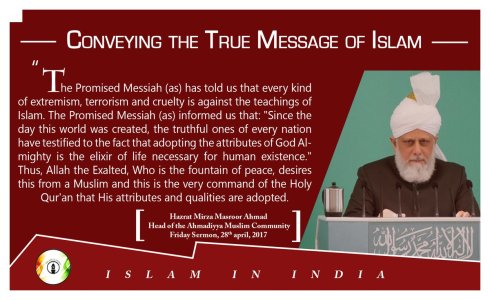 Islam is that religion which has forever enshrined the universal principles of freedom of religion, freedom of conscience and freedom of belief. Therefore, if today there are so-called Muslim groups or sects that are killing people, it can only be condemned in the strongest possible terms.”

His Holiness will be delivering the keynote addresses at the three-day Annual Convention, which is the biggest annual Muslim gathering in Britain. The event will also feature contributions by parliamentarians, faith and civic leaders.

It takes place from 28-30 July at Oaklands Farm, Hampshire.
Ends