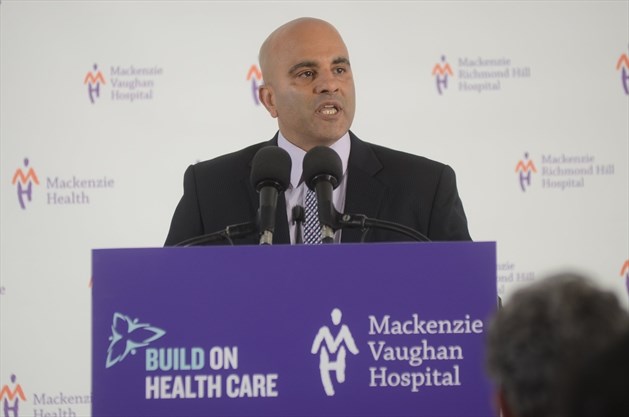 President and CEO of Mackenzie Health Altaf Stationwala will join the Ahmadiyya Muslim Jama’at and other dignitaries at the pledge celebration on July 1 at the Baitul Islam Mosque in Vaughan. – Steve Somerville/Metroland

The Ahmadiyya Muslim Jama’at Canada has pledged $2 million to the Mackenzie Health Foundation as part of the hospital’s “Exceptional Care Belongs Here” campaign.

The donation adds to the $250 million campaign that aims to equip the hospital with “state-of-the-art” equipment and service.

To celebrate the gift, Ahmadiyya Muslim Jama’at (AMJ) Canada is hosting a celebration at the Baitul Islam Mosque, 10610 Jane St., in Maple with dignitaries from AMJ and Mackenzie Health as well as local politicians.

The festivities will take place during its Canada 150 celebration on Saturday, July 1 from 3 to 4 p.m.

Mackenzie Health Foundation president and CEO Ingrid Perry praised the gift, saying AMJ had “solidified its legacy of community leadership and philanthropy” with the donation.

“The core of the Islamic faith is to serve humanity and give back to society,” said Lal Khan Malik, national president of AMJ Canada. “So we are very passionate about making a significant contribution to this much needed hospital.”

Two areas of the Mackenzie Vaughan Hospital, expected to be complete by 2020, will be named in recognition of AMJ Canada’s donation.

Notably, the Ahmadiyya Muslim Jama’at Canada Lower Main Street, which will connect the lower-level internal avenue to the west public entrance to the atrium, grand staircase and patient tower elevators.

An additional medical/surgical inpatient unit will also be named in recognition of the donation.