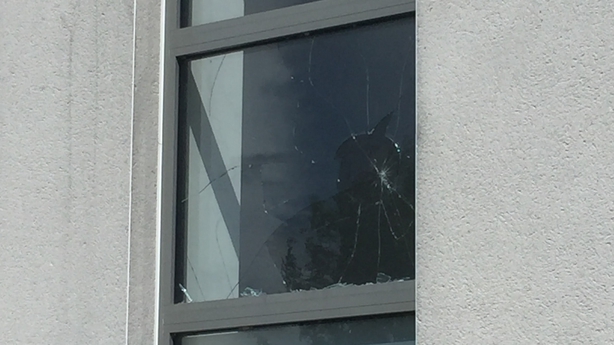 A window broken by a stone at the Maryam Mosque on the Old Monivea Road in Galway. Photograph: Joe O’Shaughnessy.

The imam of a Galway mosque which was attacked during Ramadan prayers on Monday night said its members were heartened by the wider community’s response to the incident.

Rocks were thrown through windows at the Masjid Maryam (Mosque of Mary) in Ballybrit, which is used by the Ahmadiyya Muslim community.

Gardaí in Galway are treating the incident, which happened after 11pm, as “serious” and have appealed for witnesses to come forward.

No one was injured in the incident but up to 100 members of the Ahmadiyya Muslim community were “very shaken”, according to Imam Ibrahim Noonan, who was leading prayers at the time.

“I heard a massive bang which sounded like a fuse had blown, and when the prayers were finished we looked up and saw double-glazed windows had been smashed.”

The windows broken by the… read more at source.