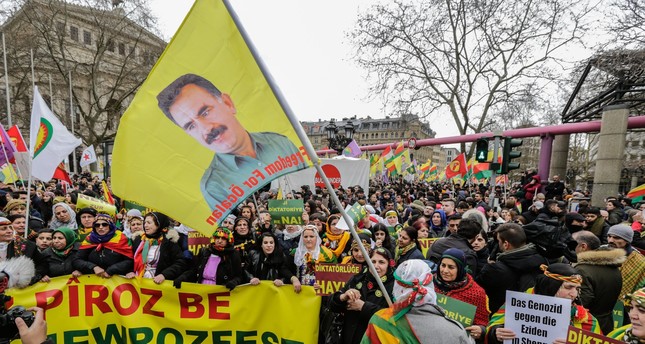 PKK followers carry a flag with a picture of terrorist group’s leader and other banned posters and flags in Frankfurt, Germany. (EPA Photo)

Around 9,000 people marched in the central German city of Frankfurt with banned PKK posters and flags, openly defying the federal government’s prohibition of terrorist symbols in public places.

The PKK sympathizers also carried banned posters and flags even though the Interior Ministry on March 2 updated its list of prohibited PKK symbols to include the image of the terrorist organization’s jailed head Abdullah Öcalan.

The group also promoted “No” vote in the upcoming April 16 referendum in Turkey as well as shouted slogans insulting the Turkish state.

A Frankfurt police statement said the group was permitted to carry out celebrations of Nevruz — a spring new year festival — in two parts of the city Saturday, adding that the main topics of the meetings were Nevruz, “Freedom for Öcalan,” and “Freedom for Kurdistan.”

This comes despite German authorities blocking nearly two dozen planned rallies by Turkish government ministers or politicians ahead of an April 16 referendum on constitutional changes in Turkey.

Presidential spokesman Ibrahim Kalın has “strongly” condemned German authorities for allowing the march. In a written statement, he said it is ”not possible to explain for German authorities to claim that Turkey’s elected representatives’ meeting with their citizens is dangerous, but treating terrorists as legitimate actors.”

“It is clearly supporting terrorism,” Kalin added. “Those, who try to explain this hostile attitude with freedom of expression and assembly, should act seriously.”

The presidential aide said some European countries, considering with what happened in Frankfurt on Saturday, “try to interfere the referendum that will take place on April 16 in Turkey and took up a position in favour of ‘No’ vote.”

“We once again remind European countries that Europe will not decide in April 16, Turkish nation will.”

“Allowing terrorist group to shout slogans about the upcoming referendum in our country while preventing Turkish deputies from meeting Turkish community in Germany is a grave example of double standards,” said the statement released by the ministry.

German officials Saturday allowed terrorist PKK followers to march in Frankfurt, in marked contrast to its recently blocking Turkish ministers and politicians from addressing Turkish voters in the country.

Nearly 3 million Turkish immigrants live in Germany, and around half are eligible to vote in Turkey’s April 16 referendum on the proposed constitutional change for a transition to a presidential system of governance, among other changes.

Turkish citizens in Germany will cast their votes at nine consulates and four other polling stations between March 27 and April 9.

Germany outlawed the PKK in 1993 but the group is still active in the country, with more than 14,000 followers.

Since the use of the PKK flag was banned earlier by the German authorities, followers of the group often carry flags bearing the image of Öcalan in rallies organized across the country, although that image too was recently banned.

The PKK — listed as a terrorist organization by Turkey, the U.S., and EU — resumed its armed campaign against Turkey in July 2015 and since then has been responsible for the deaths of approximately 1,200 security personnel and civilians, including women and children.